Nepal's Mountain Bikers Are Getting Aid to Isolated Quake-Hit Villages

A mountain bike team member hands out tarpaulin in villages in need of relief after the Nepal earthquake of April 25, 2015
Caleb Spear
By Stefanie Glinski / Kathmandu

The village of Chobar is a 20-minute bike ride from Kathmandu and was badly hit, with many people trapped in their houses.

Just a few hours later, they survived more tremors while pulling out a mother and her son from under the rubble of a half-collapsed house — both of them alive. In the immediate aftermath of Nepal’s biggest catastrophe since 1934, the young men realized that their skill at biking through the mountains would be invaluable in relief operations and making contact with isolated upland communities.

Nepal Cyclists Ride to Rescue was born. The group is a joint initiative between the mountain biking team, including national champion Ajay Pandit Chhetri, and Himalayan Single Track, an extreme mountain biking company that operates tours in Nepal.

The members of the group know the mountains around the capital Kathmandu intimately, and which tracks to take to reach quake-hit communities. They typically don’t use regular mountain bikes to do the work but bicycles specially adapted to carrying cargo.

Some communities reached by the group, like Bugmati — once a village of brick homes but now a pile of rubble — are just 15 minutes from Kathmandu. Since the quake, cyclists like Arun Karki have delivered food and supplies on a daily basis to villagers huddled miserably under tarpaulin shelters.

“We know the villages well since we cycle here often,” explains Arun Karki from the National Team.

Other communities are considerably further away.

Sixty miles north of Kathmandu lies the hill village of Shikharbesi, at the southern tip of Langtang National Park. Normally, the park is a tourist attraction, popular with foreign trekkers. But today avalanches have blocked the roads and hundreds of people are still unaccounted for. The rescue riders have established a basecamp here, distributing food, hygiene kits and medical supplies to surrounding villages.

“Every second house is destroyed, it’s unbelievable,” says Jenny Caunt, owner of Himalayan Single Track, originally from Australia and the only woman in Ride to Rescue. The narrow path leading up to Shikharbesi, which has yet to see any kind of aid, is covered with boulders and rubble, making movement difficult.

“We loaded our supplies on small trucks to get as close to the village as possible, but the last one and a half hours are on foot. Our team carried 800 kg of supplies to the village and was only supported by locals who wanted to help,” Caunt says. “From here, small groups of cyclists venture out to see if we are needed anywhere else.”

It is back-breaking work. “After two days of lifting and carrying goods I could barely move my arms,” says Tamang. But it has given the group ideas. More than just delivering aid, Ride to Rescue now hopes to rebuild houses and even a school in Shikharbesi.

“I’ve seen young men step up in unique ways during this crisis. They want to contribute profoundly and make a difference,” says American Caleb Spear, executive director at Portal Bikes, an organization that constructs the hefty bicycles currently being used to carry supplies around the hills. (They can also be used to power simple, attachable machines like water pumps or corn shellers.)

Since the earthquake Portal and another company, Epic Mountain Bike, have mobilized a group of 30 mountain bikers to distribute relief items by bike.

“It’s much easier than using cars, because we don’t need gas,” Spear explains, knowing that many gas stations have been closed since the start of the disaster. Besides supplying Kathmandu and nearby areas on two wheels, this group of bikers — most of them Nepali with a few Americans, French and Germans — also distributes and sets up tin shelters in remote villages. In Baseri, about 110 miles east of Kathmandu, they are looking after 82 households affected by the earthquake.

Some tourists who had booked trips through Epic Mountain Bike have been helping with relief work, and those who have returned home are now raising money for Nepal. All of a sudden, Kathmandu’s small biking community has a profile.

“We’re getting off our bikes and into people’s lives,” says Tamang. “We use our passion for biking to help them get back on their feet.” 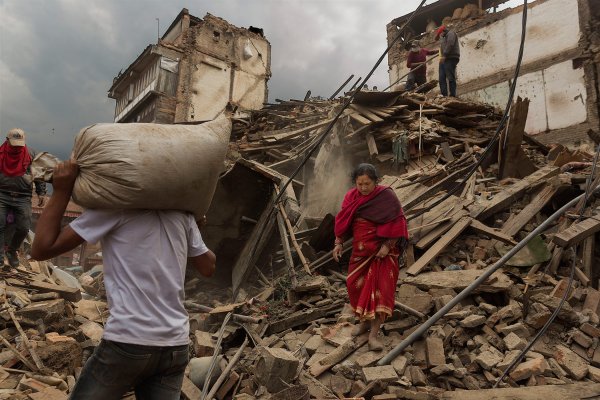 Use Data, Not Nepotism, to Deliver Aid in Nepal
Next Up: Editor's Pick