Carly Fiorina Says She Would 'Roll Back' Net Neutrality Rules

Carly Fiorina said Tuesday in her first public appearance since announcing her candidacy for the GOP nomination that she would “roll back” the new rules on net neutrality.

The former Hewlett-Packard CEO, arguably the presidential candidate with the most experience in the tech industry, came out swinging against the regulations in a talk at TechCrunch’s Disrupt event in New York City. “You don’t manage innovation, you let innovation flourish,” she said. “Regulation over innovation is a really bad role for government.”

Other Republican hopefuls have also come out in recent months against net neutrality—or the idea that all web content is treated equally—perhaps in opposition to Obama or in order to protect campaign donations, despite the fact that 85% of Republican voters say they oppose the creation of Internet “fast lanes.”

At other points during the talk, Fiorina pointed to her experience in the tech industry as a qualification for the Oval Office. “It is important to have someone in the White House who has a fundamental understanding of technology, and a fundamental vision of how technology could be used,” she said, adding that she hopes to use technology to “re-engage” people in politics.

When the interviewer, a female journalist, asked Fiorina if she would consider a Vice Presidential slot, she bristled and replied: “Would you ever ask a man that question?”

In the past, male presidential candidates like former North Carolina Senator John Edwards and former New Mexico Governor Bill Richardson have been asked whether they’re running for VP, and the idea has also been posed for former Maryland Governor Martin O’Malley, a presumed Democratic candidate. After the journalist responded that she would, the candidate said, “I’m not running for something else, I’m running because I want this job, and I think I can do this job.” 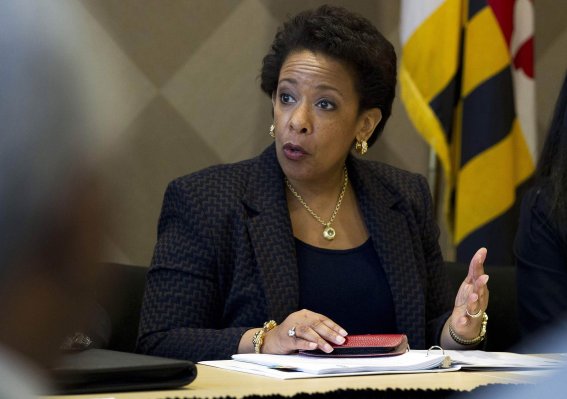 Attorney General Meets with Gray Family
Next Up: Editor's Pick