Former Arkansas Gov. Mike Huckabee speaks as he officially announces his candidacy for the 2016 Presidential race on May 5, 2015 in Hope, Ark.
Matt Sullivan—Getty Images
By Philip Elliott / Hope, Ark.

Invoking the gun he received at age 5, the prayers he recited in kindergarten and his baptism at age 10, former Arkansas Gov. Mike Huckabee launched his second presidential campaign Tuesday in the small Arkansas town the formed the basis of his small-town, Christian worldview.

A fierce social conservative and former Baptist televangelist, Huckabee stands to electrify the party’s religious conservative corners. Citing his faith repeatedly through his 30-minute announcement speech at a community college, it was clear the former governor plans to keep his Christianity at the center of his national campaign more than he did his failed 2008 bid.

“We ought to get our knees every night and thank God we live in a country people are trying to break into, instead of trying to break out of,” the 59-year-old Huckabee said.

His will be a campaign that blends political scolding and church revival.

It is a message tailored at conservatives who decide the outcome of Iowa’s leadoff caucuses, as well as the Southern states that Huckabee is putting at the front of his electoral thinking. Huckabee is betting voters in these states help him overcome the financial heft of former Florida Gov. Jeb Bush, a fundraising machine, or the enthusiasm of Kentucky Sen. Rand Paul’s libertarian supporters.

But even among Christian conservatives, Huckabee faces competition. Sen. Ted Cruz of Texas launched his campaign at the Jerry Falwell-founded Liberty University, for instance. And many influential pastors continue to eye other alternatives, including Wisconsin Gov. Scott Walker, who is the son of a pastor.

“This exceptional country could only be explained by the providence of God,” Huckabee said.

In a speech that advisers say will be the core of his political message, Huckabee rejected the Supreme Court’s authority to decide whether gay and lesbian couples can marry or women can have access to abortion rights. He also called for term limits on justices, as well as members of Congress.

“We’ve lost our way morally. We have witnessed the slaughter of over 55 million babies in the name of choice, and we are threatening the foundation of religious liberty by criminalizing Christianity,” Huckabee said. “Many of our politicians have surrendered to the false god of judicial supremacy, which would allow black-robed and unelected judges the power to make law and enforce it. … The Supreme Court is not the Supreme Being, and they cannot overturn the law of nature or of nature’s God.”

Huckabee made no mention of Democratic front-runner Hillary Rodham Clinton during his remarks. But no one overlooked the fact that Huckabee and former President Bill Clinton both called Hope their home, although they are a decade apart in age and further distanced in terms of policies and politics.

Neither the Clintons nor Huckabees call Arkansas home these days. The Clintons live in New York; Mike and Janet Huckabee call Florida their base.

The campaign launch contained a fiery message, for sure, but one that Huckabee’s team is betting earns him the nomination that slipped through his hands seven years ago. Huckabee won Iowa’s leadoff caucuses in 2008, propelling him to the top of the pack. But the campaign ran out of money, leaving Huckabee as an also-ran.

This time, he made sure he had the cash to launch — and then run — the campaign at the ready. Just look at his first day as a candidate compared to how he started in 2007.

When Huckabee launched eight years ago, he chose the television set of NBC’s “Meet the Press” as his venue. He was a little-known former governor from a Southern state who was nipping at the heels of GOP rock stars Rudy Giuliani and John McCain as well as well-connected establishment darlings such as Mitt Romney. Even as he was enjoying success, he still struggled to piece together a flashy campaign and went broke just as he was capturing the imagination of the party base.

This time, it is local marching band outside greeting guests as they arrived, overflow crowds adjoining the auditorium and towering LED screens behind the governor. As supporters filled the auditorium — the largest in the county — three suspended televisions over the stage projected the title of Huckabee’s memoir, “Hope to Higher Ground.” Another two projected his campaign’s logo, and a sixth showed an American flag. Crooner Tony Orlando warmed up the crowd with “Tie A Ribbon Round the Ole Oak Tree” and a song he said he wrote for Huckabee, “America is My Home Town.”

“We all know Mike Huckabee, right?” said Bob Wickers, Huckabee’s pollster and ad maven. “We had to do something new.”

Huckabee’s advisers acknowledge the path to the nomination remains a challenge. He is unlikely to match the fundraising haul of Bush. He is unable to match the online buzz of Paul. He cannot appeal to a new generation of Republicans as can Sen. Marco Rubio of Florida or Cruz. And he was out of the governor’s office before the tea party propelled Walker into power.

Taking a jab at them, Huckabee said those seeking the White House should resign from their day jobs.

“If you live off the government payroll and want to run for an office other than the one you’re elected to, then have the integrity and decency to resign the one you don’t want,” Huckabee said.

And for Bush, the son of one president and the brother of another, Huckabee had the swipe: “I grew up blue-collar, not blue blood.” 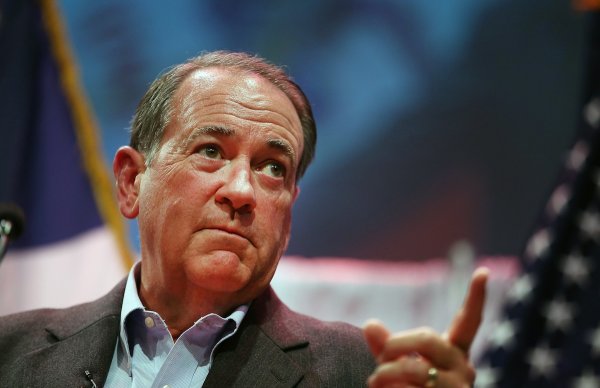 Here Is the 'Best Governors' List the Huckabee Campaign Launch Cited
Next Up: Editor's Pick