What Comcast’s Failed Merger Tells Us About Corporate Lobbying

The Comcast Corp. logo at a news conference in Washington on June 11, 2013.
Bloomberg via Getty Images
Ideas
By Lee Drutman / New America

When Comcast first announced its intent to merge with Time Warner Cable in early 2014, the conventional wisdom suggested that even though everyone knew it was a terrible, anti-competitive merger, Comcast would use its lobbying muscle to ram the deal through. After all, the company spends $17 million a year on lobbying. Its CEO, Brian Roberts, played golf with the President. Its chief lobbyist, David Cohen, organized a $1.2 million fundraiser for the President. Isn’t this how Washington works?

Now, with the news late last week that Comcast was backing out of the merger after regulators sent strong we-won’t-approve-this signals, everybody is trying to explain where the conventional wisdom got it wrong. Politico noted that, “opponents are hailing Comcast’s failed strategy as a welcome sign that money can’t buy everything in Washington.” Senator Al Franken (D-Minn.) attributed it to massive grassroots pressure: “We won because ordinary Americans can wield extraordinary power when they raise their voices.”

The simple reason that the merger failed was that Comcast and Time Warner Cable had a very weak case. But the key question is not why it failed. It’s why anyone thought they had any chance of making this deal happen in the first place.

The most likely explanation is that Comcast’s leaders over-estimated their influence. With so much in invested in lobbying, they had convinced themselves they could work magic in Washington. It’s an audacity that has come increasingly come to characterize corporate lobbying in Washington, as I describe in my new book, The Business of America is Lobbying. And it’s a big problem for our democracy, because it means we’re going to continue devoting our limited public policy attention to things we shouldn’t even be debating in the first place.

The New York Times’ Eric Lipton picked up on this arrogance in his post-mortem reporting. “Lawmakers and staff members on Capitol Hill, in interviews Friday, cited Comcast’s swagger in trying to promote this deal,” Lipton wrote. “They said they felt that Comcast was so convinced in the early stages that the deal would be approved that it was dismissing concerns about the transaction, or simply taking the conversation in a different direction when asked about them.”

Comcast’s over-confidence, however, is understandable. After all, the company had successfully navigated the challenges of a previous merger with NBC Universal. Comcast had 128 lobbyists in Washington in 2014, enough to weigh in on a stunning range of issues – reaching as far afield as the farm bill, and numerous tax issues. It could flood the zone, and be everywhere, all the time. In an interview with Politico, Rep. Tony Cárdenas (D-Calif.) marveled, “I’ve had companies come and sit with me and they would tell me that, ‘Oh, we heard in the hallways that Comcast knew we were having this meeting today.’” He continued, “And my staff and I are looking at each other like, ‘We sure as hell didn’t tell them anything.’ But that’s how they’ve blanketed Washington.”

Comcast had also bolstered its sense of influence by building up what it called “community partners” – mostly civil rights groups like the National Council of La Raza or the National Urban League, which received generous contributions from the Comcast Foundation. In return, these key Democratic constituency groups had offered their support for Comcast’s top priorities in Washington.

Clearly Comcast miscalculated in the case of this merger. In retrospect, it seems remarkable that the Justice Department would ever have endorsed the country’s top two cable operators’ merging in a way that would give a single company control of 57 percent of the national broadband market and 30 percent of the pay television market. It also seems remarkable that two companies as deeply unpopular as Comcast and Time Warner Cable thought they could convince members of Congress to ignore the widespread customer dissatisfaction.

Yet, somehow, Washington spent more than a year debating this issue, sucking up countless precious resources of time and energy both inside Congress in the larger advocacy community. Over the last 12 months, at least according to Google Trends, the “Comcast merger” has generated about as much interest as “global poverty.”

This data point can stand in for a larger problem. Corporations are the dominant actors in Washington, period. Business spends about $2.6 billion a year on reported lobbying – about 80 percent of the total lobbying expenditures and roughly 34 times the meager sums spent on lobbying by public interest groups and labor unions combined. This means that large corporations mostly drive the agenda.

Companies like Comcast and Time Warner Cable have the resources and arrogance to get Congress to seriously consider a proposal this outlandish. It’s a privilege few have. And worse, this policy aggression is a self-perpetuating cycle. The more these big companies spend, the more lobbyists they hire to make the case internally that the company ought to pick a big fight. And so they pick bigger fights, necessitating even more lobbyists.

Yet, while Comcast and Time Warner Cable may have just wasted tens of millions of dollars on lobbying, one group made out quite well: the lobbyists and consultants themselves who got paid to run their campaign, and who keep getting paid to perpetuate the cycle of ever-more ambitious lobbying. Notably, after the deal fell apart, Comcast’s CEO issued a press release showing his confidence in the company’s top lobbyist: “There is nobody better than David Cohen,” Brian Roberts wrote. “He’s incredible at what he does and we are beyond lucky that he helps passionately lead so many areas at Comcast.”

And while Comcast provoked a large public outcry due to its widespread unpopularity, few companies and mergers have anywhere close to the same potential for grassroots counter-mobilization. The biggest merger deal of 2014, like almost all big mergers, went largely unnoticed by the public (For those keeping score, that deal was a $76 million mega-merger between four energy companies that made the biggest energy infrastructure company, Kinder Morgan, even bigger. Kinder Morgan is not the household name Comcast is.) Mobilizing the public can be an effective tool where the public cares. But that only covers a limited number of issues in Washington.

Opponents of the Comcast-Time Warner Cable merger deserve to celebrate, at least a little. They were persistent in making sure that common sense stayed common sense, challenging as that sometimes is. But it was a rear-guard action – a battle that they never should have had to fight. Especially when currently more than half of U.S. households have only one broadband option, and across the U.S., we pay more for worse service than most other advanced industrial economies. Then again, this status quo should explain why Comcast ‘s leaders were so emboldened in the first place.

Lee Drutman is a senior fellow in the program on political reform at New America. This piece was originally published in New America’s digital magazine, The Weekly Wonk. Sign up to get it delivered to your inbox each Thursday here, and follow @New America on Twitter. 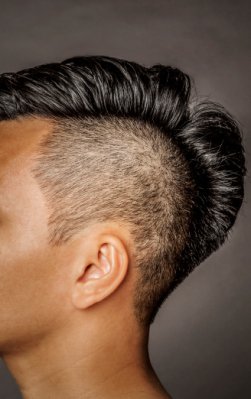 10 Things Your Hair Says About You, According to Research
Next Up: Editor's Pick