Heads of state, CEOs and university presidents are all making public and concrete commitments to gender equality in the latest installment of UN Women’s ‘HeForShe’ initiative.

As part of HeForShe’s IMPACT 10x10x10 initiative, 10 heads of state, 10 CEOs and 10 university presidents will publicly commit to taking tangible steps to achieve gender equality in their organizations. On Tuesday, the first five CEOs and five university presidents announced their commitments–the others will be released over the coming months.

Each company or university signed the UN’s Women Empowerment Principles, with a special emphasis on Principle #7: to measure and publicly report on efforts to achieve gender equality. Corporate participants detailed their plans to help close the pay gap, achieve parity in management, and expand opportunities for women throughout their supply chains.

“If we are to achieve gender equality in our lifetime, we need creative approaches that target the biggest barriers,” says Phumzile Mlambo-Ngcuka, UN Women Executive Director, noting that this program “brings together the strength of partners across sectors to crack some of those barriers from within.”

Here’s who is committing to HeForShe in the corporate world:

Sebastien Bazin is CEO of Accor, a Paris-based hotel group that employs 180,000 people and runs 3,800 hotels in 92 countries, like Sofitel, Novotel, and MGallery. As the father of two “brilliant daughters,” Bazin says he believes women should be “given the same opportunities as their male peers,” yet acknowledges that women remain underrepresented in company management. That’s why Bazin is committing to closing the pay gap within Accor, doubling the share of women in COO roles by 2020, and tripling the share of women on the executive committee by 2018. He also pledged to get 50,000 male employees (60% of the company) to commit to be HeForShe champions for gender equality.

Paul Polman is CEO of Unilever, the world’s third-largest consumer goods company. Unilever owns brands like Axe, Dove, Lipton, Sunsilk, and Hellmans, and employs 172,000 people. Right now, only 43% of Unilever managers are female, but under the new initiative the company has pledged to achieve parity in management by 2020. They’ve also promised to expand safety programs in regions where the company operates, and provide skills training and other empowerment tools to 5 million women by 2020.

Mustafa V. Koç is head of the Koç Group, the largest industrial conglomerate in Turkey and one of the biggest companies in Europe. With 113 companies and almost 86,000 employees, Koç is the only Turkish company on the Fortune Global 500 list. But the company recognizes much of their work is in male-dominated industries, and that women’s advancement is difficult in Turkey and throughout the region. To that end, Koç is committing to mobilizing 4 million people across Turkey to speak up for gender equality, and providing gender sensitivity training to 100,000 people by 2020. And this year, the company will release its first-ever report on gender parity.

Dennis Nally is chairman of PricewaterhouseCoopers, the professional services firm that is one of the largest campus recruiters in the US. Using their networks on college campuses, the company has pledged to develop a gender equality curriculum to reach 1 million male students by 2016. They’ve also pledged to evaluate how to get more women into leadership roles within the company, and promised that every senior partner will publicly commit as a HeForShe by the end of the year.

Rick Goings, CEO of Tupperware Brands, has pledged a full audit of the company, from senior executives down to factory workers, with an eye towards reaching 50/50 representation at every part of the supply chain. Tupperware has also promised to educate their entire sales force — 3 million people — about HeForShe.

And here are the universities committing to HeForShe:

The University of Hong Kong aims to triple the number of women in dean-level positions by 2020 (currently, only 7% of deans are women.) The University is also working on a gender bias curriculum that they hope will reach 50% of students by 2018.

The University of Leicester in the UK aims to bridge the gender gaps in key academic areas like psychology and engineering, and pledged to make their faculty 30% female by 2020. They’ve also created a prize for exceptional work in achieving gender equality.

Nagoya University in Japan has pledged to build the first-ever Center for Gender Equality in Japan by 2018, and will continue to establish women-only faculty positions in science subjects. They’ll also create dedicated programs for female PhD students and mentoring programs to help women occupy 20% of the faculty and university leadership positions by 2020 (a 25% increase).

University of Waterloo in Canada is committing to boosting female enrollment in STEM fields by two-thirds by 2020, so that woman make up 33% of math and science students. They’re also pledging to make the faculty 31% female and the administration and senior leadership 34% female by 2020.

University of Witwatersrand (Wits) in Johannesburg pledges to have women occupy 32% of the Heads of Schools roles by 2019, and to increase women in professor roles to 30%. They also plan to publish annual reports on campus violence, and work on non-traditional techniques to spread the message of gender equality, including “ambush lectures,” to reach students who are skeptical as well as those who are supportive.

Correction: The original version of this article incorrectly described the University of Waterloo’s goal for women enrolled in STEM fields. It is 33%. 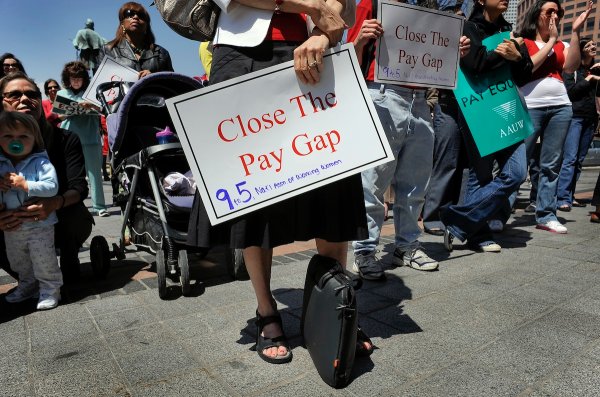 Here's the History of the Battle for Equal Pay for American Women
Next Up: Editor's Pick