Use Data, Not Nepotism, to Deliver Aid in Nepal

People reclaim their possessions from the wreckage in Bhaktapur, Nepal.
James Nachtwey for TIME
Ideas
By Ravi Kumar
Ravi Kumar is the co-founder of Code for Nepal, an initiative working to increase digital literacy and use of open data in Nepal.

On April 25, a devastating earthquake struck Nepal. To date, more than 7,500 have lost their lives, and the death toll is still climbing. Many Nepalis, myself included, had an idea that this tragedy was coming. Experts had warned that a powerful earthquake in Kathmandu Valley could kill 100,000 people and injure 300,000 more. I convinced my parents not to move to Kathmandu from Janakpur, a small town southeast of the capital, for these very reasons.

On the day the earthquake hit, after finding out that relatives and friends in Kathmandu Valley were alive, I worked to connect volunteers and people affected by the quake, using low-tech solutions including a Google Doc and social media. As I helped crowdsource resources and needs, and read reports from the ground, it became apparent that there was little relief available for villages outside of Kathmandu Valley. When we look at the data coming out of the disaster so far, it’s clear that these villages need relief, too.

For Nepal to recover, the delivery of aid should be driven by the evidence on the ground and socio-economic data. If Nepal’s history is any guide, we know that people with connections and power have access to most of the resources, especially during times of crisis. Given Nepal’s history of nepotism and tribalism, it’s imperative that aid is delivered to those who are most affected by the disaster, rather than any other criteria. The data show that villages outside the Kathmandu Valley need aid the most, not just based on the lives lost and houses destroyed by this disaster, but also because historically people in the villages had less to start with.

The majority of Nepalis (80%) live in villages. Their voices are rarely heard because they often lack the means of voicing their needs due to illiteracy and poor Internet penetration in these remote areas. For instance, in Nuwakot, a district about 60 miles northwest of Kathmandu, about 45,000 houses have reportedly been destroyed or damaged. According to Nepal’s 2011 census, there are about 59,000 households in that district. That means that potentially only one in four houses are left intact in Nuwakot. Yet only about 1,300 people in the district have been reported injured by the earthquake—a figure that’s likely underreported. Even after four days, villages in Nuwakot had not received much help. Distance from the capital and the lack of a powerful advocate have likely made it harder for the people of Nuwakot to receive aid. Less than 60% of the population is literate, and more than 20% live in poverty.

To stop similar scenarios from becoming the norm, we must let data guide where aid goes so that those in areas of high need are reached. At Code for Nepal, an initiative that aims to increase digital literacy and encourage the use of open data, we have been regularly updating an interactive map of the effects of Nepal’s earthquake. It uses district-level data to show injury tolls, death counts, and houses damaged to determine where aid is needed the most.

Letting politics and nepotism guide aid will compound the natural disaster with a human one. It would increase inequality in Nepal, already one of the most unequal societies in the world. Before the disaster, according to the latest Nepal living-standard survey, the top 10% of Nepal’s population took up about 40% of the income.

Data will not only make aid effective, but it will also help us detect failures and prepare us for another potential disaster. My country can no longer afford to be guided by centuries-old traditions of paternalism, fear, and nepotism. We are in shock, fearful for our future, and full of raw emotion, but we must be intelligent and bold.

If we deliver aid based on where it is needed, our buildings will rise again. And so will our nation. We have no other choices but to recover, rise, and rebuild. 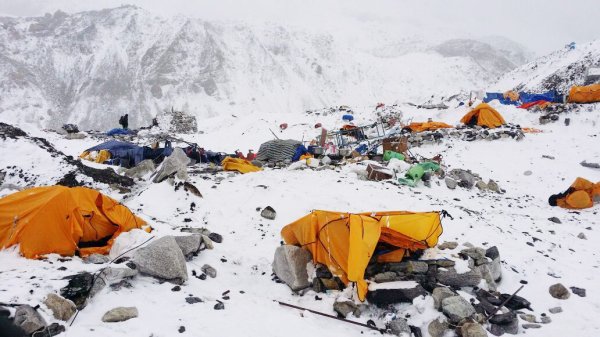 Climber: Life Is Tough on the Top of the World
Next Up: Editor's Pick