What Was on the Minds of the Big Three at Potsdam

Yuen Foong Khong’s Analogies at War argued that the way policymakers remember the past influences how they establish their positions about problems they see in the present. In this case, Khong argued, the historical analogy that a policymaker saw in the American position in Vietnam in 1965 proved to be the single most important factor in establishing his recommendation to President Johnson. In brief, if a policymaker saw echoes of the appeasement of Munich, then he suggested a large American commitment; if he saw the war in Korea, he argued for a limited commitment and lowered expectations for victory; if he saw Dien Bien Phu, he tended to argue against any increase in American dedication to Southeast Asia.

I was interested to see what historical analogies the men of 1945 brought with them when they gathered at Potsdam to discuss the end of the Second World War in Europe. The two existing histories of the conference, published in 1960 and 1975, were both products of the Cold War. They tried to parse the words of the leaders of 1945 in a quest to analyze the jockeying between the western allies (Britain and the United States) and the Soviet Union for position.

To be sure, some of that jockeying happened at Potsdam, but when they left Germany in early August, the leaders of the great powers did not believe that a future of competition necessarily lay ahead. Although they were fully aware of the policy disagreements among them, they did not speak in terms of a Cold War. Most Americans left Potsdam as afraid of conflict with an imperial Britain as with the Soviets.

I therefore wanted to see Potsdam as the men of 1945 did. Not knowing the future, they naturally looked to the past as a guide, as did American policymakers twenty years later. Many of the men of 1945, moreover, had a quite active interest in history. Harry Truman’s diaries and notes are filled with references to the past and Winston Churchill had already written a number of historical studies. He would soon win the Nobel Prize for his history/memoir of the Second World War.

A number of historical analogies presented themselves and, as in 1965, each suggested a different way forward. A small number of conferees, led by British Foreign Minister Sir Anthony Eden and American Ambassador to the Soviet Union Averill Harriman, thought in terms of Munich. They saw Russian behavior between the Yalta and Potsdam conferences as aggressive and acquisitive. They hoped to use Potsdam to solidify a joint Anglo-American bloc to counter Soviet expansionism.

A far more common historical analogy, and the one that dominated the proceedings at Potsdam, was the Paris Peace Conference. All of the conferees were haunted by the failures of 1919. Several of them, most notably British economist John Maynard Keynes and the new American Secretary of State James Byrnes, had been in Paris in 1919 and were horrified by what they had seen. Above all, Harry Truman told the delegates on the first day of the Potsdam conference, we must avoid the mistakes of Versailles.

The Versailles analogy carried different meanings for different people. To the Soviets and the British especially, it meant keeping the rest of the world away. Unlike the Paris Peace Conference, which convened with 27 nations and four non-state actors*, Potsdam represented the wishes of the Big Three only. Stalin noted wryly that two world wars had started over the interests of small states, and Great Britain was equally happy to keep its imperial subjects as far from Potsdam as possible.

More importantly, the conference agenda dealt with subjects that would have been intimately familiar to the men of 1919. With the exception of the very brief mention of the atomic bomb then being tested in the desert of New Mexico, every subject discussed at Potsdam had been also discussed in Paris a generation earlier. These subjects included the proper place of Germany in the postwar world; the issue of German reparations; the borders of the new states in eastern Europe; the problem of resettling refugees (although this problem was many times larger in 1945 than in 1919); and the proper way to reshape East Asia.

The desire to fix the problems of 1919, far more than any incipient fear of a Cold War that had not yet happened, determined what came out of Potsdam. Instead of drawing lines on a map to fix the borders of Eastern Europe, the Big Three of 1945 moved people. To be more precise, the Soviets moved people and the Anglo-Americans either acquiesced or turned their heads and chose not to see what their Russian allies were doing. Instead of a schedule of reparations (the issue that, more than any other, had doomed Versailles), the Big Three agreed to divide Germany and enforce separate reparations policies in their respective zones. They also decided on a full occupation of Germany and a strict avoidance of colonial claims.

All delegates left Potsdam as satisfied as a compromise peace could make them. Some were more optimistic than others about how long great power amity would or could last. But they had the solved the problems of 1945 as they then understood them: Germany would pose no more threat to European security; Eastern Europe’s political and ethnic borders would better overlap, albeit at a staggering human cost; and the United States would maintain a commitment to the future of Europe. In making these decisions, the Big Three of Potsdam looked not forward to Cold War but back to the mistakes of the Big Three that had preceded them in Paris a generation earlier.

*They included Ireland (not yet a state), the Arab delegation under Emir Faisal, the Zionists, and Vietnam.

Michael Neiberg teaches at the US Army War College. His published work specializes in the First and Second World Wars, notably the American and French experiences. His most recent book on the First World War is “Dance of the Furies: Europe and the Outbreak of World War I” (Harvard University Press, 2011). His latest book is “Potsdam: The End of World War II and the Remaking of Europe” (Basic Books, 2015). 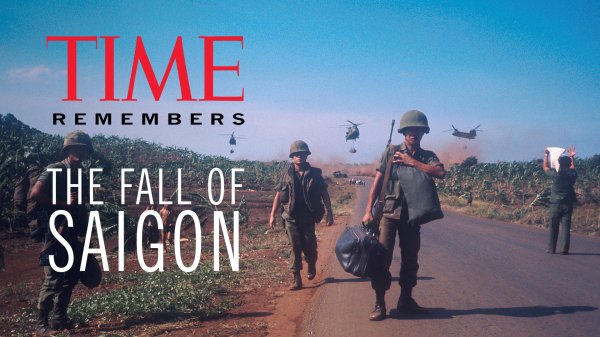 Eyewitness to the Fall of Saigon
Next Up: Editor's Pick