James Taylor's Latest Song, 'Angels of Fenway,' Is an Ode to the Boston Red Sox

Fans in attendance for Sunday’s Yankees vs. Red Sox game at Fenway Park got a sampler from what will be James Taylor’s first album in 13 years when he debuted his single “Angels of Fenway” — an ode to the Boston Red Sox — at the ground.

Taylor wrote the song to chronicle his experience as a fan, focusing on the 2004 World Series championship team that finally broke the “curse of the Bambino” and won the franchise’s first championship in 86 years.

“In 2004, that miracle season, that incredible thing that happened and what it meant to Red Sox fans, and to the city of Boston, to all of New England … it moved me deeply and I knew I wanted to write about it,” Taylor said.

According to the Associated Press, the song was played through the public address system prior to the game and was accompanied by a music video featuring iconic moments from Red Sox history — like a shot of Curt Schilling’s iconic bloody sock.

The 67-year-old Taylor also threw out the ceremonial first pitch and sang the traditional seventh-inning stretch anthem “America the Beautiful.”

Taylor is scheduled to perform a concert at Fenway Park with Bonnie Raitt on Aug. 6.

Before This World will be released June 16 and “Angels of Fenway” will be featured on the album. Fans of the song can purchase it on iTunes along with “Today Today Today,” which was released last month. 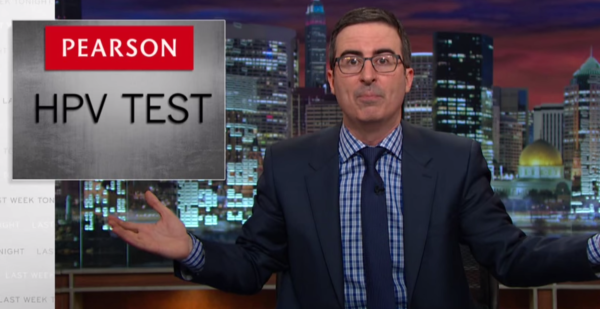 Watch John Oliver Give Failing Marks to Standardized Testing
Next Up: Editor's Pick