Six Space Cups as delivered to NASA January, 2015 for the Capillary Effects of Drinking in the Microgravity Environment (Capillary Beverage) investigation.
Image courtesy of Andrew Wollman/NASA
By Helen Regan

Astronauts aboard the International Space Station can now enjoy a much-needed hot cup of joe with their very own espresso machine and six specially designed microgravity coffee cups.

But NASA says these Space Cups will do a lot more than lift espresso to an astronaut’s lips. They will also provide scientists with data on how complex fluids (such as coffee or tea with sugar) move in zero gravity, writes Mark Weislogel, professor at Portland State University and former senior aerospace engineer for NASA working on microgravity fluid physics.

MORE: See the Trailer for TIME’s Unprecedented New Series: A Year in Space

Before the invention of the Space Cup, astronauts would have a drink by sucking liquid out of a bag. The new coffee cups (which are transparent 3-D-printed jugs) have a sharp inner corner that allows the liquid to be pushed along the inside of the cup — a process called capillary flow — towards the drinker’s lips.

By experimenting with capillary fluid physics in small containers like cups, scientists believe it will help them build better and safer advanced fluid systems that are relied on in space, including oxygen supply, water coolants, air conditioners, toilets and fuel and recycling systems.

But NASA says the data collected in the study can also be applied to fluid systems on earth, like improving portable medical diagnostic devices used to quickly test blood for infectious diseases in remote areas of the world. 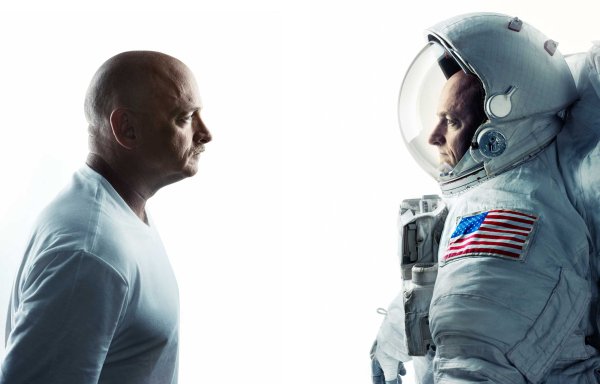 The Great Space Twins Study Begins
Next Up: Editor's Pick