My Brother's Keeper Takes a Step Outside of the White House

President Barack Obama speaks about recent unrest in Baltimore during a joint news conference with Japanese Prime Minister Shinzo Abe on April 28, 2015, in the Rose Garden of the White House in Washington.
Jacquelyn Martin—AP
By Maya Rhodan

An initiative intended to provide more opportunities to young black and Latino men is expanding outside the White House, a key signal of President Obama’s post-2016 plans.

On Monday, Obama will travel to Lehman College in the Bronx for the launch of the My Brother’s Keeper Alliance, an independent non-profit that will give money to programs that support black and Latino boys from early childhood to after high school.

The new program largely mirrors a government initiative Obama launched in early 2014 to address the opportunity gap among minorities. Since its launch, the existing program has raised about $500 million for grants and 200 communities have pledged to help more.

The goal of both versions of My Brother’s Keeper is to reduce the racial gap for young men. In a fact sheet, the White House noted that one-fourth of African American and Hispanic males between the ages of 16 and 24 are neither employed nor in school.

Leaders from corporations including Pepsico, American Express and BET are involved in the effort, which already has raised $80 million for the first round of grants. The alliance will be headed up by former Deloitte CEO Joe Echevarria, who grew up in the South Bronx and had served as the co-chair of My Brother’s Keeper in the White House.

The new group is launching at a time when the problems facing young black and Latino men in America’s cities has gained renewed attention due to protests related to police shootings in Ferguson, Mo.; New York and Baltimore.

In an email, Broderick Johnson, chairman of the existing White House initiative, said the launch comes at a particularly resonant moment for him as a “son of Baltimore.”

“As the country reflects on our shared responsibility to ensure that opportunity reaches every young person, I urge everyone to look at their own capacity to make a difference,” Johnson wrote. “The President’s My Brother’s Keeper Initiative is about recognizing that our young people are not the problem, but rather the solution.” 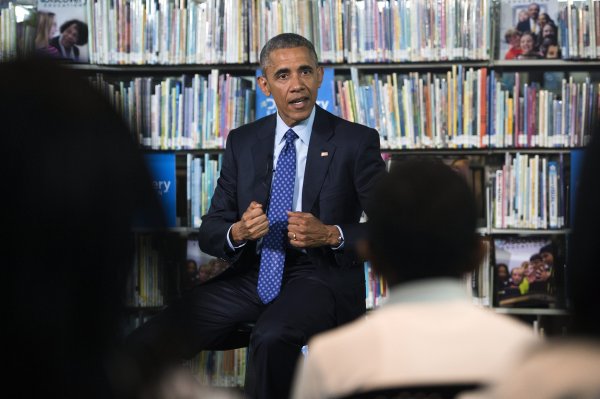 Watch This 6th Grader Cut Off President Obama for Talking Too Much
Next Up: Editor's Pick