Numerous celebrities were on hand to watch Floyd Mayweather Jr. beat Manny Pacquiao in Saturday night’s “Fight of the Century” in Las Vegas, and they apparently didn’t fly coach to get there.

Las Vegas’s main commercial airport, McCarran International, was reportedly closed to private planes on Saturday after celebrities packed the airport with their parked jets, according to Sports Illustrated.

In several images posted to Twitter, the airport lot is filled with private planes and jets, parked wing-to-wing.

Musician and producer Emilio Estefan, who was headed to the boxing match, also tweeted an image of the full lot at McCarran. “Arrived in #LasVegas to a #SoldOut airport! Ready for the big fight tonight #MayweatherPacquiao #Boxing,” he wrote on Saturday.

The match, which drew big-name attendees including Beyoncé, Jay, Mark Wahlberg, Justin Bieber and Tom Brady, was the biggest payday in boxing history. Pacquiao and Mayweather were estimated to split $300 million before even entering the ring at Las Vegas’s Grand Garden Arena. Many celebs bet big on the match, including Wahlberg, who went head-to-head with Diddy for a cool $250,000.

Officials for McCarran International said it was expected to reach record volume, and airport officials were directing passengers to nearby, less familiar airports, the Las Vegas Review-Journal reported on Friday.

Rita Carrillo, manager for Signature Flight Support, one of the companies receiving private planes at McCarran, also told the newspaper that the weekend’s estimated volume was the largest she could remember in her 30 years at the airport.

“I don’t think people realize the magnitude of this event,” Carrillo said, continuing, “and the type of clientele that is coming in to see us.” 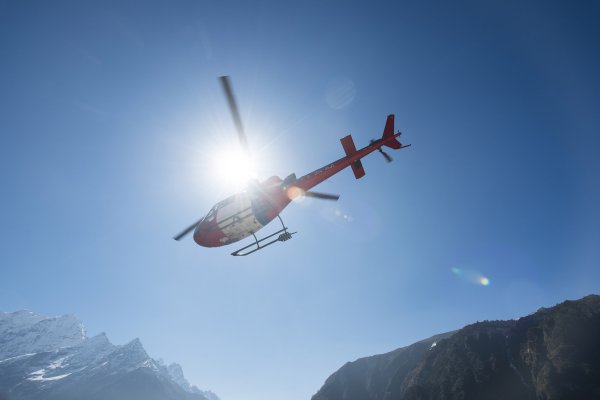 Nurse Dies in Fall From Medical Helicopter During Rescue
Next Up: Editor's Pick