Two more women, including an actress who had appeared on The Cosby Show, came forward with new accusations against Bill Cosby on Friday, according to the The Wrap.

Actress Lili Bernard and Sammie Mays reportedly detailed their allegations against Cosby, 77, in a press conference with civil rights attorney Gloria Allred in New York. Bernard, who appeared in an episode of the final season of The Cosby Show, claims she received death threats from the comedian after he drugged and raped her while supposedly preparing her for a role in 1992.

“After he had won my complete trust and adoration he drugged me and raped me,” Bernard reportedly said in her statement.

After the attack, the actress says Cosby told her, “As far as I’m concerned, Bernard, you’re dead. Do you hear me? You’re dead, Bernard. You don’t exist, I never wanna see your face again. Now get the hell out of here!”

“I interpreted that as a death threat and feared for my life,” Bernard said.

The encounter reportedly left the actress feeling suicidal for months, and she claims she continues to suffer from panic attacks and night terrors “as a result of what Mr. Cosby did to me.”

Mays, who was working as a writer at the time she met Cosby, also detailed her memory of the attack at the press conference.

In the mid-’80s, she asked the comedian for an interview while covering the National Association of Television Program Executives convention in New Orleans. Mays says she invited Cosby to her hotel room to talk, where he allegedly mixed a drink for her. After she took two large swigs of the drink, she reportedly claims, “The next thing I remember when I awoke from my state of unconsciousness, I seemed to have been drooling and was sloppily slouched in the chair with barely the edge of my bottom in it.”

According to Mays, she opened her eyes to find her shirt and bra undone and her breasts exposed. She also says her belt had been “unhooked and re-hooked, left loose around my hips.”

Both women’s stories bear similarities to the group of now more than 40 women who claim to have been drugged and assaulted by Cosby over his long career.

Three new accusers – who are also being represented by Allred – came forward just last week claiming to have been attacked by Cosby, including a former model who claims she was drugged by the comedian in 1975 at the Playboy Mansion in Chicago.

“When we arrived at the Playboy Mansion he asked if I would like to see the mansion and have a glass of wine before I left,” former model Marcella Tate told reporters. “Mr. Cosby brought me a drink and that was my last clear memory. The next cloudy memory I have is that I was in a different room. I was in bed. Bill Cosby was next to me and it didn’t appear he was wearing anything.”

Cosby, his wife, Camille, and his attorney, Martin Singer, have steadfastly denied the accusations so far.

Singer did not respond to a request for comment, but in a previous statement said that claims “about alleged decades-old events are becoming increasingly ridiculous.”

Allred confirmed at the press conference on Friday that she will attend the scheduled protest of the comedian’s performance at the Cobb Energy Performing Arts Centre in Atlanta on Saturday. 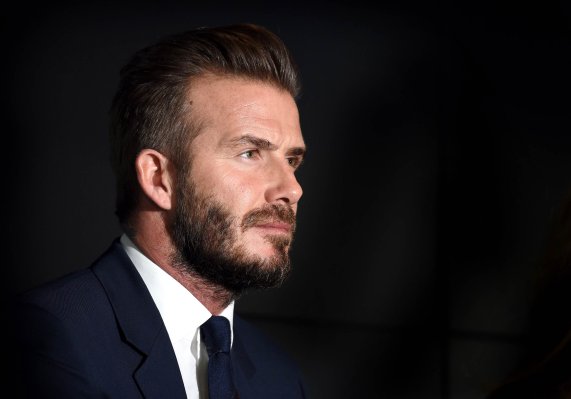 Photos: See David Beckham Through the Years
Next Up: Editor's Pick