Why Charges in the Freddie Gray Case Came Quickly

Baltimore City State's Attorney Marilyn J. Mosby announces that criminal charges will be filed against Baltimore police officers in the death of Freddie Gray in Baltimore on May 1, 2015.
Andrew Burton—Getty Images
By Josh Sanburn

The charges brought against six Baltimore officers involved in the death of 25-year-old Freddie Gray on Friday came just a day after police turned over their investigation to the Baltimore state’s attorney’s office. And experts say the swift nature of the charges likely reflects the strength of the case against the officers involved.

While several high-profile police-related deaths have not seen indictments—like in the cases of Michael Brown in Ferguson, Mo., and Eric Garner in Staten Island, both of whom died after confrontations with police—the charges brought against Baltimore police were extensive and came rapidly.

That’s a sign there’s likely very strong evidence to prosecute. “In my experience, prosecutors do not bring cases they plan to lose,” says Phillip Stinson, a criminal justice professor at Bowling Green State University. “It seems to me that the facts of this case are so egregious that the prosecutor has a really strong case.”

But the speed with which the charges were brought could also reflect decisions made by some of the officers involved to become potential state’s witnesses. Candace McCoy, a professor at John Jay College of Criminal Justice, says that in many cases involving charges brought against multiple officers, there are often cops who offer to testify against their colleagues — though she emphasizes that it’s too soon to say whether that’s the case here.

McCoy praised Mosby’s decision to indict all six officers, however, instead of trying to bring charges against just one or two. She argues that the reason no charges were brought against NYPD officer Daniel Pantaleo, who used an apparent chokehold against Garner that helped lead to his death, is because a grand jury was only considering one officer involved instead of several who were trying to detain Garner.

“It’s important that they’re indicting all the officers,” McCoy says. “Trying to convince a grand jury to indict just one person when the jury realizes all of them contributed is difficult. One person alone is not responsible for a death.”

It may also work in the prosecutor’s favor that a firearm wasn’t used in the Gray incident. Stinson, who tracks the number of police officers arrested and charged around the U.S., says officers are more likely to be convicted in on-duty deaths when the incident does not involve a firearm.

Of the 48 cases Stinson has tracked since 2005 involving police-related deaths without a firearm, 61% resulted in a conviction. But of the 54 officers prosecuted in a death without a firearm, only 20% have led to charges, according to data compiled and analyzed by Stinson and the Washington Post. Thirty-nine percent of officers were not convicted and 35% of cases are still pending.

The most serious charges in Gray’s death have been brought against Officer Caesar R. Goodson, Jr., who was the driver of the police van carrying Gray. Goodson has been charged with second-degree murder, second-degree assault and three counts of manslaughter. No gun was involved.

“Courts are very reluctant to second-guess split-second decisions by officers when a gun is involved,” Stinson says. “But in these other cases, it’s not as easily explainable and they’re not willing to give the benefit of the doubt because they’re oftentimes so egregious.” 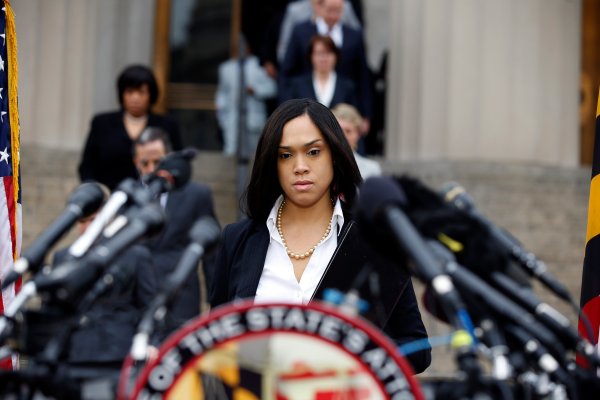 Read the Transcript of Marilyn J. Mosby's Statement on Freddie Gray
Next Up: Editor's Pick