20 Commonly Misused Phrases (and How to Use Them Correctly)

When you hear someone using grammar incorrectly do you make an assumption about his or her intelligence or education? There’s no doubt that words are powerful things that can leave a lasting impression on those with whom you interact. In fact, using an idiom incorrectly or screwing up your grammar is akin to walking into a meeting with messy hair. That’s according to Byron Reese, CEO of the venture-backed internet startup Knowingly. The company recently launched Correctica, a tool that scans websites looking for errors that spell checkers miss. And the business world is no exception. “When I look for these errors on LinkedIn profiles, they’re all over the place—tens of thousands,” he says.

Correctica recently scanned a handful of prominent websites and you might be surprised at how many errors it found. Here is Reese’s list of the some of the most commonly misused phrases on the Web.

It’s an easy misspelling to make–just add an extra r and “prostate cancer” becomes “prostrate cancer,” which suggests “a cancer of lying face-down on the ground.” Both the Centers for Disease Control and Prevention (CDC) and the Mayo Clinic websites include this misspelling.

This suggests that the first person to arrive has to serve all who follow. The actual phrase is “first-come, first-served,” to indicate that the participants will be served in the order in which they arrive. Both Harvard and Yale got this one wrong.

A “peak” is a mountain top. A “peek” is a quick look. The correct expression is “sneak peek,” meaning a secret or early look at something. This error appeared on Oxford University’s site as well as that of the National Park Service.

This should be “deep-seated,” to indicate that something is firmly established. Though “deep-seeded” might seem to make sense, indicating that something is planted deep in the ground, this is not the correct expression. Correctica found this error on the Washington Post and the White House websites.

To “extract” something is to remove it, like a tooth. The correct expression is “exact revenge,” meaning to achieve revenge. Both The New York Times and the BBC have made this error.

6. I could care less

“I couldn’t care less” is what you would say to express maximum apathy toward a situation. Basically you’re saying, “It’s impossible for me to care less about this because I have no more care to give. I’ve run out of care.” Using the incorrect “I could care less” indicates that “I still have care left to give–would you like some?”

“Shoo-in” is a common idiom that means a sure winner. To “shoo” something is to urge it in a direction. As you would shoo a fly out of your house, you could also shoo someone toward victory. The expression started in the early 20th century, relating to horse racing, and broadened to politics soon after. It’s easy to see why the “shoe-in” version is so common, as it suggests the door-to-door sales practice of moving a foot into the doorway to make it more difficult for a prospective client to close the door. But “foot in the door” is an entirely different idiom.

With this one there is no debate. The verb “emigrate” is always used with the preposition “from,” whereas immigrate is always used with the preposition “to.” To emigrate is to come from somewhere, and to immigrate is to go to somewhere. “Jimmy emigrated from Ireland to the United States” means the same thing as “Jimmy immigrated to the United States from Ireland.” It’s just a matter of what you’re emphasizing–the coming or the going.

“Sleight of hand” is a common phrase in the world of magic and illusion, because “sleight” means dexterity or cunning, usually to deceive. On the other hand, as a noun, a “slight” is an insult.

First, it’s important to note that this particular expression is hotly debated. Many references now consider “hone in” an proper alternate version of “home in.” That said, it is still generally accepted that “home in” is the more correct phrase. To home in on something means to move toward a goal, such as “The missile homed in on its target.” To “hone” means to sharpen. You would say, “I honed my résumé writing skills.” But you would likely not say, “The missile honed in on its target.” When followed by the preposition “in,” the word “hone” just doesn’t make sense.

The term “bated” is an adjective meaning suspense. It originated from the verb “abate,” meaning to stop or lessen. Therefore, “to wait with bated breath” essentially means to hold your breath with anticipation. The verb “bait,” on the other hand, means to taunt, often to taunt a predator with its prey. A fisherman baits his line in hopes of a big catch. Considering the meaning of the two words, it’s clear which is correct, but the word “bated” is mostly obsolete today, leading to ever-increasing mistakes in this expression.

This should be “peace” of mind, meaning calmness and tranquility. The expression “piece of mind” actually would suggest doling out sections of brain.

14. For all intensive purposes

The correct phrase is “for all intents and purposes.” It originates from English law dating back to the 1500s, which used the phrase “to all intents, constructions, and purposes” to mean “officially” or “effectively.”

“One in the same” would literally mean that the “one” is inside the same thing as itself, which makes no sense at all. The proper phrase is “one and the same,” meaning the same thing or the same person. For example, “When Melissa was home schooled, her teacher and her mother were one and the same.”

The phrase “by and large” was first used in 1706 to mean “in general.” It was a nautical phrase derived from the sailing terms “by” and “large.” While it doesn’t have a literal meaning that makes sense, “by and large” is the correct version of this phrase.

While it may be easy to surmise that “do diligence” translates to doing something diligently, it does not. “Due diligence” is a business and legal term that means you will investigate a person or business before signing a contract with them, or before formally engaging in a business deal together. You should do your due diligence and investigate business deals fully before committing to them.

The correct phrase in this case is “case in point,” which derives its meaning from a dialect of Old French. While it may not make any logical sense today, it is a fixed idiom.

Worried that poorly functioning spell checkers will make you look bad? Run things like your résumé, blog posts and the content of important emails through Correctica’s “Proof It Free” tool.

Read next: 39 Commonly Misused Words and How to Use Them Correctly 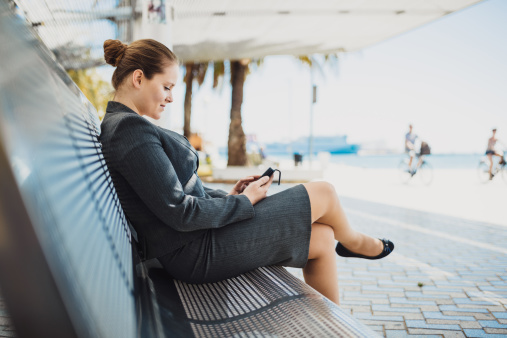 Here's the Secret to Getting Way More Done During the Day
Next Up: Editor's Pick