The Red Woman is going yellow.

The character started off as a joke among The Simpsons writers, many of whom are Game of Thrones fans, when they realized van Houten shared a last name with Millhouse. The Dutch actress became friendly with some of the writers on Twitter, and they invited her to observe a table read. A few months later, they offered her a role.

In a chat with The Hollywood Reporter, van Houten talks geeking out over The Simpsons‘ studio and what to expect from the episode.

I came in very shy, and very humble. I’ve been fan a fan for twenty years. They started introducing the cast to the small audience, and then all of a sudden this guy says, “And we have a very special guest today. It’s Melisandre and she’s sitting in the corner there!” I thought, “This is so strange! It’s the other way around. I’m supposed to be the fan here.”Afterwards they took me to the writers room and wanted to take pictures with me. I had to put an autograph on a Westeros map.

What was the next step?

I went back to Amsterdam and I didn’t hear anything. It was quiet for awhile. All of a sudden, I got an email that said, “It is happening.” My voice was so high-pitched when I heard. I was jumping up and down like a little girl. I’ve never been as enthusiastic about any job.

Your character smokes, so is she supposed to be sort of a bad kid?

She’s sort of a cool kid from Amsterdam. She’s snobby about being European and doesn’t really like anything about America. She’s a free spirit from Amsterdam. Apparently she’s quite attractive to yellow, small boys.

How long were you recording for?

Maybe an hour. It’s a guest role. It’s not a huge thing and they are very proficient. I would have loved to have been in that studio forever, but it’s also a job.

What kind of feedback did they give you about your character?

When I was first doing the first few sentences, they said, “You can make it even bigger! This is a cartoon. You can make it as big as you want.” It’s so great. If you do a lot of movies and TV, you always try to be subtle and you try to do your eyebrow acting. Then all of a sudden you have this job where you can exaggerate like crazy.

This is a pretty different role, at least for what U.S. audiences are used to you doing.

In my own country, I’ve done a lot of romantic comedies. I came from a school where a lot of comedians come from and for some reason I always get cast for serious, strong, fierce women. Which I love, but I’d love to do things that are slightly nerdy or weird or crazy. You get type cast quite easily. I would love to play a nerd. I feel like a nerd. I don’t feel like a very strong woman like Melisandre. Melisandre is probably the person that is furthest away from any character I’ve ever played. It’s fun, too.

Will you be back?

They didn’t promise anything. I definitely wasn’t shy. I told them I’d love to come back. I would do it if I had to pay for it. I thought it was a huge honor. 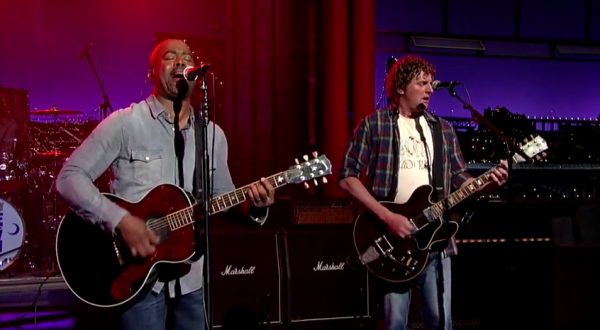 Hootie & the Blowfish Bring David Letterman Back to 1994
Next Up: Editor's Pick