When serendipity hands scientists the perfect experiment, they don’t hesitate to jump on it. That’s surely the case with NASA’s improbable study of Scott Kelly, who has just completed the first month of a one-year stay aboard the International Space Station, and his identical twin brother Mark, who will spend the same year on Earth.

Zero-gravity messes with the human body in all manner of ways but it’s not always easy to determine which problems are actually caused by the weightlessness and which would have happened anyway. The puzzle gets a lot easier if you just happen to have a second subject with exactly the same genes, the same lifestyle and the same level of fitness. Observe any differences in their health over the year, subtract the matching genetics and what’s left over on the other side of the equal sign is likely the work of weightlessness. Much of the research that will investigate these differences in the Kellys is already underway, both in space and on the ground.

One of the most important studies involves what are known as telomeres, the cuffs that protect the tips of chromosomes in much the way a plastic aglet protects the tips of shoelaces. The longer we live, the shorter our telomeres get, and the unraveling of the chromosomes that results drives the infirmities that come with age.

“One of the things that comes up almost all the time in the interviews with Mark and Scott is this idea of the twin paradox,” says Susan Bailey, of Colorado State University, who is coordinating the telomere research. “Is the space twin going to come back younger than the Earth twin?” That kind of time dilation happens in movies like Interstellar, but only when someone is moving at close to light speed. The year Scott will spend orbiting Earth at 17,500 mph (28,000 k/h), may indeed slow his body clock, but by barely a few milliseconds. His telomeres, however, will more than make up for that, and he’ll likely come home physically older than Mark.

“A whole variety of life stresses have been associated with accelerated telomere loss as we age,” says Bailey. “You can imagine strapping yourself to a rocket and living in space for a year is a very stressful event.”

Chromosomal samples from both Kelly twins were taken and banked before Scott left to provide a telomere baseline, and more samples will be collected over the year. Mark’s are easy enough to get ahold of, but Scott will have to draw his own blood in space, spin it down and freeze it, then send it home aboard returning ships carrying cargo or astronauts. Both twins will also be followed for two years after Scott comes back to determine if any space-related telomere loss slows and if the brothers move closer to synchrony again.

The twins’ blood samples will also be used to look for the state of their epigenomes, the chemical on-off switches that sit atop the genome and regulate which genes are expressed and which are silenced. Environment is a huge driver in epigenetic changes, especially in space, as cells adjust to the unfamiliar state of weightlessness. “We can kind of build these molecular maps of what’s happening in the different cells…as they’re challenged by this low gravity condition,” says geneticist Chris Mason of Weill Cornell Medical Center in New York City, who is leading this part of the work.

Also due for a good close look are Scott’s and Mark’s microbiomes. The number of cells that make up your body are actually outnumbered 10 to one by the bacteria, viruses, yeasts and molds that live in your body. It’s only the fact that most of them are also much smaller than human cells that prevents them from outweighing you 10 to one as well. Still, if you could extract them all and hold them in your hand they’d make a hot bolus of alien organisms weighing up to 5 pounds.

This is actually a good thing, since we need this interior ecosystem to keep our bodies—especially our digestive tract—running smoothly. Like so much else for Scott, that will change in space. “A significant part of what’s present normally in the gastrointestinal tract doesn’t actually colonize,” says research professor Martha Vitaterna of Northwestern University, co-investigator on the microbiome work. “These are things that are constantly being reintroduced with fresh fruits and vegetables, and that’s missing from Scott’s diet.”

Genes can also make a difference to the microbiome, since any individual’s genetic make-up may determine which microorganisms thrive in the gut and which don’t. Scott’s and Mark’s microbiomes will be compared throughout the year, principally through stool samples—ensuring some unglamorous if scientifically essential shipments coming down from space.

Other studies will involve the way body fluids shift in zero-g, drifting upwards to the head and elsewhere since there is no gravity pulling them down. This can damage vision as a result of pressure on the eyeballs and optic nerve. It can also lead to damage to the cardiovascular system, with astronauts returning to Earth at increased risk of atherosclerosis.

Some of these changes can be tracked by blood studies, which will look for proteins that regulate water excretion. Ultrasound scans can also look for vascular damage. Before leaving Earth, Scott had a few small dots tattooed on his upper body to indicate the exact points at which he has to position the ultrasound probe—easier than taking precise measurements to find the proper spots every time he’s due for a scan.

Multiple other studies will be conducted on the twins as well, looking at their immune systems, sleep cycles, psychological states and more. For years, space planners have been talking a good game about going to Mars one day, but those trips will last more than two years. We know the hardware can survive the trip; what we don’t know is if the human cargo can. A year from now—thanks to the Kellys—we’ll be a lot smarter.

TIME is covering Kelly’s mission in the new series, A Year In Space. Watch the trailer here. 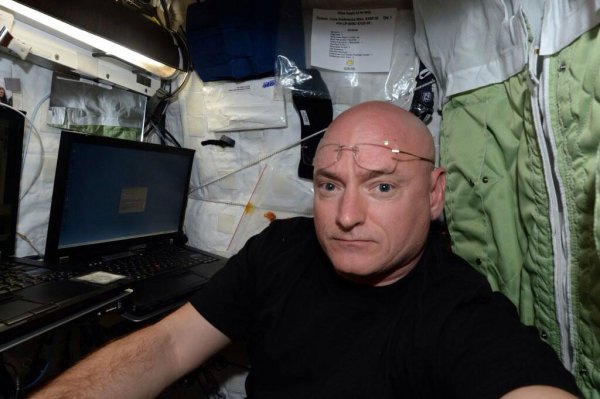 Astronaut Scott Kelly Spends a Month in Space, With 11 to Go
Next Up: Editor's Pick