These Are the 5 Facts That Explain Nepal's Devastating Earthquake

Destroyed villages sit on mountain tops near the epicenter of the massive earthquake, in the Gorkha District of Nepal on April 29, 2015.
Wally Santana—AP
By Ian Bremmer

The earthquake that ravaged Nepal, killing at least 5,000 people, has revealed the best and worst both in the Himalayan nation and those rushing to its aid. These 5 facts explain what’s shaping the domestic and international responses to the 7.8 magnitude earthquake, and where Nepal goes from here.

Aid pledges are pouring in: $10 million from the US, $7.6 million from the UK, and $3.9 million from Australia, among others. But as welcome as this influx of funds is, the sad reality is that Nepal is ill-equipped to make full use of these resources. That is why countries are lining up to donate technical expertise via disaster response teams as well. China has sent a 62-member search-and-rescue team to help the recovery effort. Israel has sent 260 rescue experts in addition to a 200-person strong medical team, while Japan has sent another 70 people as part of a disaster relief team. The United Nations, in addition to releasing $15 million from its central emergency-response fund, is busy trying to coordinate international efforts to maximize their effectiveness.

Nepal’s infrastructure was critically feeble even before disaster struck. With per capita GDP less than $700 a year, many Nepalese build their own houses without oversight from trained engineers. Nepal tried to institute a building code in 1994 following another earthquake that claimed the lives of 700 people, but it turned out to be essentially unenforceable. To make matters worse, a shortage of paved roads in the country means that assistance can’t reach remote regions where it’s needed most. Local authorities are simply overwhelmed, as is Nepal’s sole international airport in Kathmandu. Planes filled with blankets, food and medicine are idling on tarmacs because there are not enough terminals available.

The economic cost of the earthquake is estimated to be anywhere between $1 billion to $10 billion, for a country with an annual GDP of approximately $20 billion. The economic impact will be lasting. Tourism is crucial to the Nepalese economy, accounting for about 8 percent of the total economy and employing more than a million people. Mount Everest, a dangerous destination under the best of circumstances, is the heart of that industry. The earthquake this past weekend triggered an avalanche that took the lives of at least 17 climbers, and as many as 200 people are still stranded on the mountain.

Nepal’s domestic politics are not helping. Nepal’s 1996-2006 civil war claimed the lives of at least 12,000 Nepalese, and the country’s political system has never really recovered. The government that stood before the quake was woefully ill-prepared to deal with a disaster of such scale. There have been no elections at the district, village or municipal level for nearly 20 years, and the committees in charge of local councils are not organized enough to deal with the difficult task of coordinating emergency assistance. Things are not much better at the national level, where Kathmandu has seen nine prime ministers in eight years.

5. A competition for influence

Not all foreign aid is altruistic, and some countries never miss an opportunity to capitalize on tragedy. For years, Nepal has been an object of competition between India and China. For India, Nepal has been a useful buffer state between itself and China ever since Beijing gained control over Tibet. Relative to China, India and Nepal are much closer linguistically and culturally. Nepalese soldiers train in India, and New Delhi is a main weapons supplier to Nepal. For China, Nepal is an important component of its “New Silk Road” plan to link Asia with Europe, and offers a useful ally against Tibetan independence. China was already Nepal’s biggest foreign investor as of 2014. While in the immediate aftermath of the earthquake both Asian powers are providing significant assistance, it’s in the reconstruction phase where the true competition between the two will emerge. Pay particular attention to the race to build hydroelectric power plants: both Beijing and New Delhi have been positioning themselves to take advantage of Nepal’s 6,000 rivers to feed their respective energy needs. 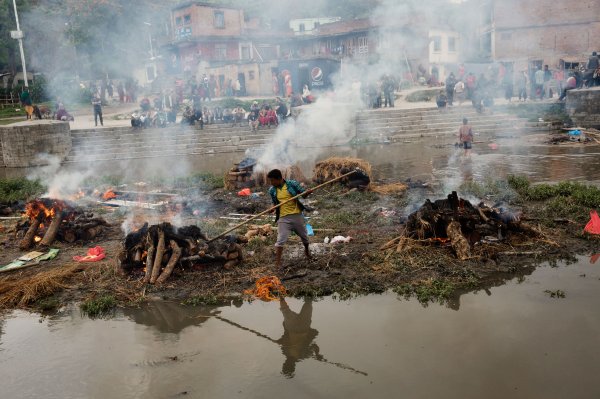