Baltimore protesters took to the streets in huge numbers Friday afternoon after an announcement by state’s attorney Marilyn J. Mosby that six police officers would face charges including second degree murder, manslaughter and assault in the death of Freddie Gray in police custody.

Protest leaders, some lawmakers and family members of the 25-year-old, who died a week after sustaining spinal injuries during his arrest, welcomed the news. Richard Shipley, Gray’s stepfather, called the charges “an important step in getting justice for Freddie.”

But Baltimore’s police union condemned the charges announced by Mosby, who was elected the city’s chief prosecutor in November. “I have never seen such a hurried rush to file criminal charges which I believe are driven by forces which are separate and apart from the application of law,” said Michael Davey, lawyer for Baltimore’s Fraternal Order of Police. “We believe that the actions taken today by the state’s attorney are an egregious rush to judgement.”

Gray’s death on April 19 has sparked sometimes violent protests in Baltimore and across the country against what demonstrators say was an excessive use of force by police, and reignited a national conversation about race and policing.

Speaking on Friday morning, Mosby called the officers who arrested Gray and left him handcuffed and unsecured in the back of a police wagon “grossly negligent” for refusing to put a seatbelt on him, despite having at least five opportunities to do so. Gray had asked for medical assistance on at least one occasion, she said, but “no medical assistance was rendered or secured for Mr. Gray from any officer.”

By the time Gray was finally removed from the van, he was “in cardiac arrest and seriously injured,” Mosby noted, adding that multiple officers had “observed Mr. Gray unresponsive on the floor of the wagon.”

All six officers now face charges of second degree assault, which carries up to 10 years in prison. In addition, Officers Caesar Goodson Jr., William Porter, Brian Rice, and Alicia White are being charged with involuntary manslaughter which could mean an additional 10 years in prison.

On top of that, Officer Goodson, who was driving the police wagon, is also facing two charges of manslaughter by vehicle (one gross negligence, one criminal negligence) and one charge of second degree murder that could carry a 30-year prison sentence. Mayor Stephanie Rawlings-Blake said that five of the six officers are now in custody, and that “there will be justice” for Gray and his family.

Baltimore’s police union also demanded that a special prosecutor be appointed to handle the case against the officers. In an open letter to Mosby released Friday, Fraternal Order of Police president Gene Ryan voiced concern at her “many conflicts of interest” in the case, noting the prosecutor’s “close relationship” with the Gray family attorney, who donated $5,000 to her 2014 campaign. Ryan also charged that the political future of Mosby’s husband Nick, a Baltimore city councilman, would be “directly impacted” by the case.

Freddie Gray’s fatal encounter with police began just before 9 a.m. on April 12, when he was arrested after he made eye contact with a police officer and ran. He was caught 40 seconds later and arrested after police found a knife in his pocket. The officers cuffed him, allegedly denying his request for an inhaler, and put him in the back of a police wagon where he was later shackled.

Mosby said that Gray was “at no point secured by a seatbelt,” and was lying on his stomach head first on the floor of the wagon. After four stops and at least one request for medical assistance, Gray was removed from the van and taken to the hospital with severe injuries that nearly severed his spine. He succumbed his injuries a week later.

Mosby announced Friday that her team found that the officers had “failed to establish probable cause for Mr. Gray’s arrest, as no crime had been committed.” She also noted that the knife found in Gray’s pocket was not a switchblade, “and is lawful” under Maryland law.

Mosby emphasized on Friday that she was the daughter of two police officers and comes from a long line of law enforcement. “These accusations of these six officers are not an indictment on the entire force,” she said. “The actions of these officers will not and should not damage in any way the important working relationships of police and prosecutors. Thank you for your courage, commitment and sacrifice for the betterment of our communities.”

In the days before and after Gray’s funeral on Monday, Baltimore residents flooded the streets demanding justice for Gray, a demonstration that is as much about the systematic injustices facing Baltimore’s black youth as it is about Gray’s death. The protests turned violent at times, as people burned cars, looted a CVS and threw rocks and bricks at police officers earlier this week, injuring at least 15 of them. Meanwhile other protestors marched peacefully in the streets, holding signs. The Governor declared a state of emergency, and the National Guard was deployed to enforce a curfew and help keep the peace.

Gray’s death has also led to an increased scrutiny of the Baltimore police department’s history of using force. Between 2011 and 2014, the city has paid almost $6 million in settlements to more than 100 victims of police brutality, according to an extensive report by the Baltimore Sun, with victims including a pregnant woman and a grandmother. And Baltimore police have long been accused of taking suspects for “rough rides,” where they get banged around in the back of a police vehicle. At least two victims have won multi-million-dollar lawsuits against the Baltimore police for “rough rides” that left them paralyzed, according to The Atlantic.

Maryland Congressman Elijah Cummings (D-MD) praised the decision to prosecute the officers, calling it a “new day in our city.” “So often these things happen, and nothing happens,” he said. “Our children went out there and protested, for the most part peacefully…. they had to protest to get here.” President Obama also spoke out Friday, saying it was “absolutely vital” that the truth comes out.

Mosby too had a message on Friday for the hundreds of Baltimore youths and young people around the country who are protesting in the streets in the days following Gray’s death. “I will seek justice on your behalf. This is a moment. This is your moment.”

“You’re at the forefront of this cause, and as young people, our time is now,” she said. 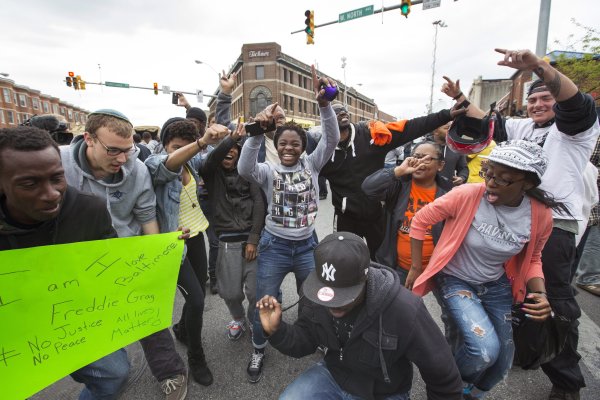 Baltimore Celebrates After Charges Announced Against 6 Officers in Gray's Death
Next Up: Editor's Pick