Jim Webb offered a rare sight Thursday. Standing on a grassy knoll overlooking a pond at the Vietnam Veterans Memorial, the likely 2016 Democratic presidential contender spoke in bitter detail about the the fall of Saigon 40 years earlier.

A “very liberal, anti-war Congress” cut off funding to the South Vietnamese shortly before Saigon fell to the Vietcong, Webb argued. “If our political leaders had done a better job with their duty, we may have seen a different situation in Vietnam.”

But more unusual than the topic — a war Americans increasingly consign to history — was how Webb spoke: as a combat veteran.

Despite an unusually large field, the only veterans among the potential candidates in the 2016 presidential race are Webb and former Texas Gov. Rick Perry, who flew a transport plane for the Air Force in the 1970s but never saw combat.

To Webb, that experience — along with stints in the Department of Defense and one term as a U.S. Senator from Virginia — makes him unusually qualified, if he decides to run.

“I understand foreign policy and defense policy,” he told TIME after his speech, standing with a scrum of reporters on the grass. “I’ve worked on it every possible way you could do it. I grew up in the military I served in combat. My son served in combat. I spent five years in the Pentagon. I served as a military planner in the region.”

There was a time when it would have been unheard of for the only combat veteran considering a run for president to be an underdog with little chance of winning a party’s nomination. From 1948 to 2008, every single presidential contest featured at least one veteran of the armed forces as a party nominee, many of them decorated war heroes. There was John McCain in 2008, John Kerry in 2004, Al Gore in 2000, Bob Dole in 1996, George H.W. Bush in 1992, and so on.

Webb has a long resume of combat credentials. He served as a lieutenant, and then a platoon commander in Vietnam, earning a Navy Cross, a Silver Star, two Bronze Stars, and two Purple Hearts. A Navy account has him capturing Viet Cong soldiers, throwing claymore mines into bunkers, and shielding soldiers from grenades with his own body. He was later assistant Secretary of Defense and U.S. Secretary of the Navy under President Reagan.

Military veterans such as Webb aren’t just a rarity in presidential races. Their numbers have declined dramatically among all politicians. In the 92nd Congress (1971-1972), 73% of congressmen were veterans. Today, fewer than 20% of members of Congress have served in the military. On the Supreme Court, only Justice Samuel Alito has served.

That reflects a broader trend in the United States since President Nixon ended the draft in 1973: fewer and fewer Americans have served in the military. Today, 12.7% of all adults are veterans. Among senior citizens, those number are much higher, with more than half of men ages 65-69 having served in the military, and 81% of men over 90 counted as veterans, according to a Gallup poll last year.

Webb’s military past hasn’t made him a hawk. He questioned the Iraq War months before the invasion began in 2003, doubting that a war against Saddam Hussein would help the United States combat terrorism.

But on Thursday, he struck a bellicose tone on the Vietnam War that a non-veteran might hesitate to use. Pointing at the nearby Vietnam Veterans Memorial, which lists the name of all the American dead from the war, he said a memorial with the names of the South Vietnamese would be “four times” as big. And then he boasted, “if there was a wall for the communist soldiers who we fought against in those battles, that wall would be 24 times as big as that wall.” 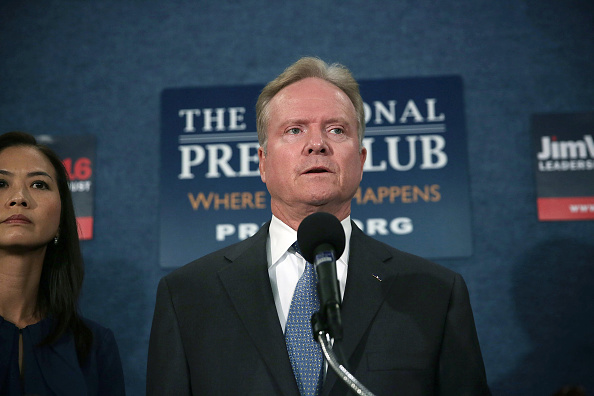 Jim Webb Says He Won't Vote for Clinton But Leaves Room for Trump Vote
Next Up: Editor's Pick