Sitting in the library of the U.S. embassy in Kathmandu, Corey Ascolani, 34, signs on to his Facebook page for the first time in a week. In the top right corner of the page, the notification’s icon is flagged bright red — the result of family members and friends pleading for information.

Beside him, eyes affixed to their own monitors, are Eric Jean, 32, and Della Hoffman, 31, from Colorado. On April 25, these three Americans, along with 50 others, were stranded in Langtang district, a popular trekking region in central Nepal, when the 7.9-magnitude earthquake, and subsequent landslides, destroyed the region’s celebrated trails. Stranded for more than six days, the trio was rescued Thursday when U.S. Special Forces choppered them, and 27 others, to safety.

The serrated snow-capped peaks of Langtang have lured intrepid travelers for generations. Last Saturday, with mild temperatures and clear skies, this trekking haven ensnared Eric and Della. They set out at around 9 a.m. from Syabru Besi, a small town in central Nepal where buses drop off their pack-laden passengers. It was their fifth day in the landlocked country, and their final stop on a yearlong round-the-world trip. They planned to return home on June 2.

Cory had also arrived earlier in April, traveling to Nepal for the pristine hiking and the promise of meditation. Around 9:30 a.m., he set off from Syabru Besi at a brisk pace, as the low-lying clouds were melted by the rising sun.

By noon, Corey, Eric and Della found themselves at one of the iconic teahouses, painted turquoise and white, in the village of Bamboo. Cascading down steppes in the alpine valley, the village is framed between mountain and the Langtang River. Finding seats at one of the five tables on the sun-drenched terrace, Eric and Della ordered tea and chapati (South Asia unleavened bread) and were settling down to rest.

They heard the earthquake first.

Hundreds of meters overhead, the violent quaking had loosed a far more immediate threat. Moments after the Nepali villagers burst from exits of the teahouse, Eric and Della watched as a thunderous shower of rock coursed down the side of the mountain. “The rocks sounded like cannon fire,” Eric said.

One of the largest boulders, untold feet in diameter, tore through the teahouse less than 200 m from the couple’s table. Compelled by fear alone, Della climbed to her feet and rushed to end of the terrace nearest the river. There, she knelt down in a brace position, her back to the mountain. Eric, warm tea still in hand, hesitated for a few moments before crawling beneath a wooden table.

Corey, watching others tip their tables toward the incoming rocks, simply stood up, pressed record on his GoPro camera, and stared at the rocky torrent careening toward the valley floor. “I don’t know why I did it,” Corey said. “I was watching where the rocks were coming from in the hopes I might get out of the way in time.”

When the tumbling rocks came to rest, the valley was choked with plumes of dust, as sharp-edged shards of showered rock blocked the trails both up and downstream. The disaster left one Nepalese guide bleeding from the head and another local villager dead.

At this altitude, Nepal’s Himalayan expanse can be as harsh as it is idyllic. As one traverses east or west, upstream or down, toward the peak or into its valleys, Langtang’s mystique is easily missed: anything made for or by man, typically has to be walked into this remote region. The only crop that grows at such altitude is potato, and this frugal diet is supplemented chiefly by yak’s cheese, with occasional vegetables carries by a sandaled train of porters.

And so just moments after noon on April 25, Corey, Eric and Della worried they might not be able to walk out.

Stranded in a foreign place, the trio and others in Bamboo village looked to the locals for guidance. In one lull between earthquake and aftershock on Saturday afternoon, they followed the Nepalese away from the riverbed and up onto a nearby flat. The spot, tucked behind two immense boulders, provided a natural barrier between themselves and the mountain.

By late afternoon, as crude tents and shelters had started to sprout up, other hikers began to arrive, turned back by blocked trails. Fresh and weary faces brought news of near misses and wanton destruction. Many reported that fallen rock had effectively blocked all trails off the mountain pass.

Without power or a working cellular signal, the group had only one communications tool: a single satellite handset carried by one of the hikers.

Each person took their turn typing their email addresses, one character at a time, into brief but critical missives. After establishing a signal, the group relayed this information to the girl’s mother abroad. “We were all relieved to know that somebody out there knew where we were,” Della told TIME.

MORE: Six More Ways to Give to Nepal Earthquake Relief

But Saturday’s disaster had created a bubble of its own. For Corey, Della and Eric, the folded mountains that separate the Bamboo village from Kathmandu, also masked the size and scale of the earthquake. By Sunday, the number killed by the earthquake would climb to 3,200. (By Friday morning, that toll had reached 5,800.)

“We didn’t understand the gravity of what happened until we received those first few messages,” said Eric.

By then the group had organized themselves into smaller teams. Lacking food and basic supplies, they again turned to the local Nepalese, pooling 20,000 rupees to purchase food, blankets and any cushions found in the rubble they could salvage as mattresses.

They collected buckets of water, boiling each to ensure it was safe to drink. Together, they even cleared a large circle of land adjacent to the river, marking the center with an H. Watching helicopters fly far overhead, they hoped the helipads would catch someone’s attention. To be sure, they built two more.

On Tuesday at 8 a.m., the camp awoke to the loud whirring of rotors. Just hours earlier, the group had developed a flight plan — a crude list of who should have priority if and when a helicopter arrived.

“We had seen a few helicopters high above,” said Eric. “But when we saw the helicopter coming in low, the tears started streaming down our faces.” That morning, however, the helicopter was committed to the rescue of one group, and one group only: mere minutes on the ground, it loaded up the five trapped Japanese citizens and their guide, and took off.

One day later, the Americans would suffer the same cycle of excitement and loss as a helicopter sent for stranded Israelis would leave the remaining 27 behind. With tensions frayed, members sent a renewed barrage of satellite-routed messages — to friends, family and the forceful. In concert, but unknown to them at the time, a campaign on social media and between family and consular staff had raised hopes that a rescue might be imminent.

At 10:30 on Thursday morning, a nine-passenger helicopter cut through the fog in Kathmandu Valley. At the helm, a Nepalese pilot, with two members of the U.S. Special Forces in tow. Climbing out of the valley, and up in elevation, the skies cleared, revealing the brilliant blues and lush greens that have made this part of Nepal so popular with the adventurous from all corners of the world. Della, Eric and Corey had been up since dawn when they heard the helicopter, flying low, up the valley and toward their camp. When the runners touched down, they finally heard the words they had longed for: “Americans first, but we’ll make sure we get everyone out.” Four helicopter trips later, in just under an hour, all 27 were rescued.

Over dinner, their first in days, the trio worked through their last week together, often correcting each other’s accounts, and pausing to reflect on what the experience meant to them.

Their rescue flight took them to Dhunche, which now serves as a staging zone for the Nepalese military and more complicated air relief efforts. Once there, the three met with U.S. consular staff, one of whom mentioned a chance of returning to Kathmandu today. When the time came to board, though, there were five Americans for three spots — Corey, Eric and Della, and another couple. They flipped a coin and won. 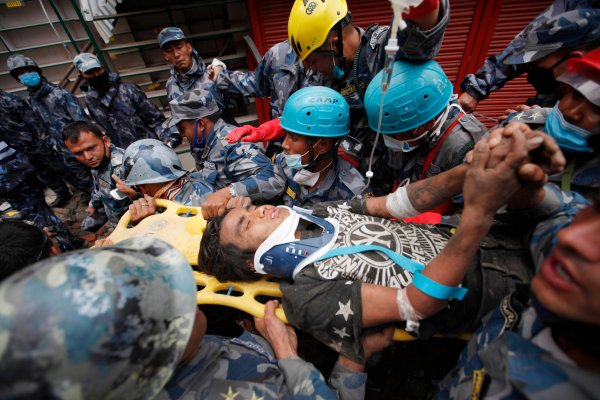 Holding Out Hope in Nepal
Next Up: Editor's Pick