By Eliza Berman and Anne Most

For anyone who hasn’t realized that Kristen Wiig has moved on from her days on Saturday Night Live, her new film Welcome to Me gets the message across pretty clearly. Over the last few years, she has proven herself to be an exceptional dramatic actress—in addition to continuing to showcase her well-honed comedic chops—and Welcome to Me allows her to bring the best of both sides to a single character.

In the film, Wiig plays Alice Klieg, a former veterinary technician who wins $86 million in the lottery and decides to put the money into a talk show. Starring her. About her. She also happens to have borderline personality disorder. If the premise sounds strange, it’s even stranger onscreen. But it’s the compassion with which Wiig plays Alice that brings the whole bizarre endeavor back to earth. Alice’s diagnosis is not Alice; it’s just one part of her, like the facts that she loves Oprah and maintains a high-protein diet including but not limited to string cheese, yogurt and frosted meatloaf cake.

“I just thought she was really sweet and sad and complicated and unlike anything I’ve ever done before,” Wiig tells TIME. She prepared for the role not only by learning about BPD, but also by discussing the character exhaustively with director Shira Piven and screenwriter Eliot Laurence to ensure they shared a vision of who Alice was and how to strike the proper tone. “We were all on the same page of keeping the funny parts but also acknowledging the dark stuff and not ever making fun of anything,” she says.

When Wiig began taking on into more dramatic roles, she sometimes found that audiences laughed at parts that weren’t intended to be funny. “At first I took it as people weren’t taking me seriously,” she says. “Knowing how I prepared for a certain scene, when people were laughing, I took it personally a little bit.” It was almost like they had been conditioned, from watching her for years on SNL, to find the comedy in her speech and movements. But over time, she says, she made peace with that.

And while Alice may seem like a radical departure from the Target Lady or the irritating one-upper Penelope that Wiig played on SNL, Wiig says she approaches all characters in much the same way. “In some ways they’re all kind of the same,” she explains, “because they’re not you, and you want to do your best job to be that person—whether it’s for six minutes on SNL or three months when you’re shooting something.” That said, she can’t envision bringing any of her sketch characters to the big screen: “I don’t think anyone wants to watch my characters for that long!” she says.

Welcome to Me, which premiered at the Toronto International Film Festival in 2014, opened in limited theaters on May 1 and expanded nationwide on May 8. 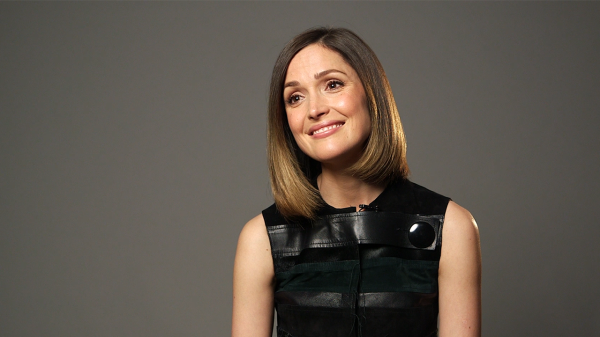 Rose Byrne on Why Her Hair 'Needs Its Own Credit' in Spy
Next Up: Editor's Pick