Drones have been tracking stray dogs in Houston, flying onto the White House lawn and now: finding their creative voice.

Early on Wednesday, a graffiti artist named KATSU piloted a hacked Phantom drone to paint red lines across a massive billboard of model Kendall Jenner’s face, WIRED reports, supposedly marking the first time a drone has been used for graffiti in such a way.

“It turned out surprisingly well,” KATSU told WIRED. “It’s exciting to see its first potential use as a device for vandalism.”

See Banksy’s Art From Around the World 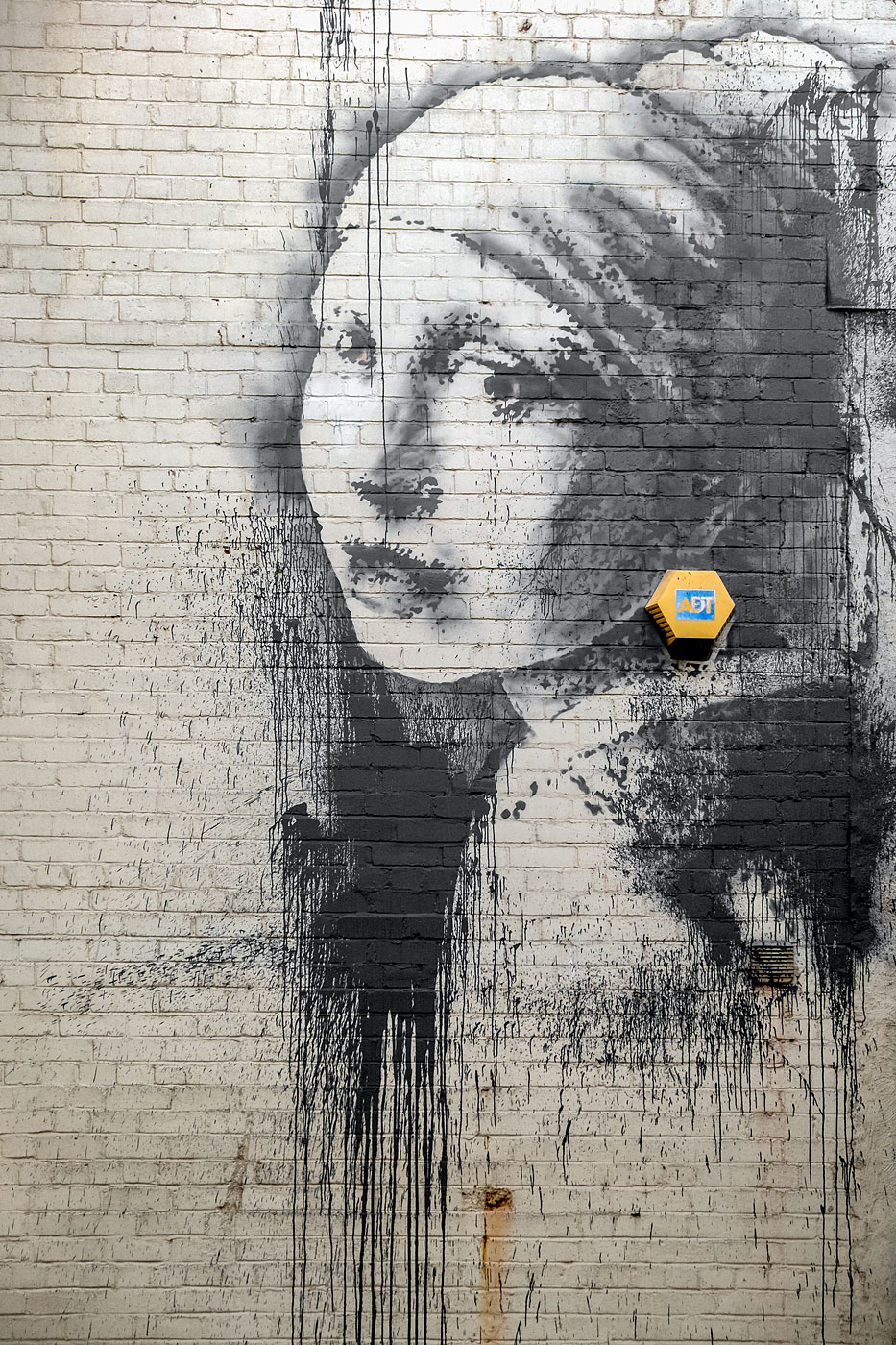 The new Banksy depicting the painting 'Girl with a Pearl Earring' by Dutch painter Johannes Vermeer is see on a wall in Bristol Harbourside, England on Oct. 20, 2014.
Paul Green—Demotix/Corbis 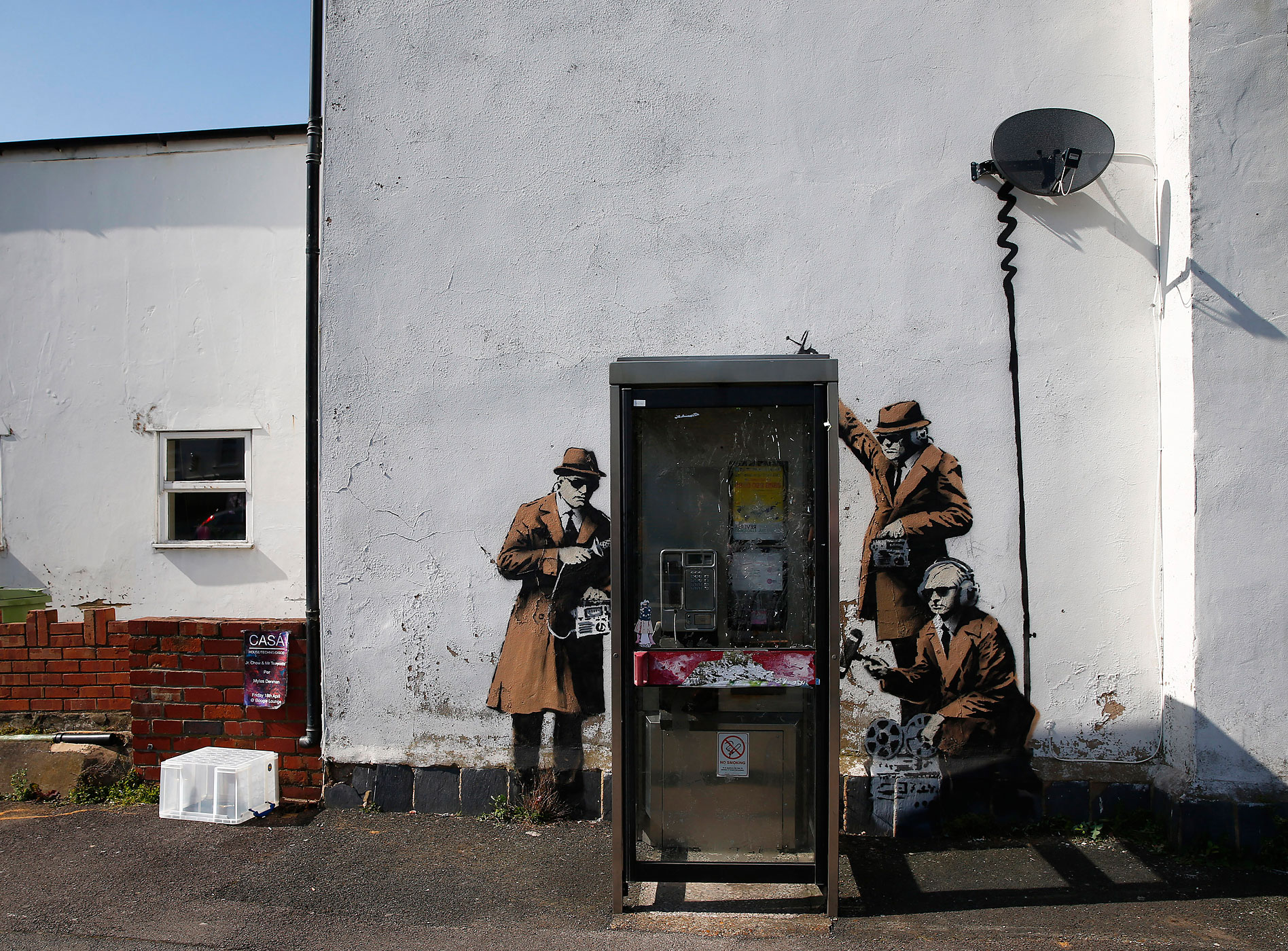 A Banksy is seen near the headquarters of Britain's eavesdropping agency, Government Communications Headquarters, known as GCHQ, in Cheltenham, England on April 16, 2014.
Eddie Keogh—Reuters 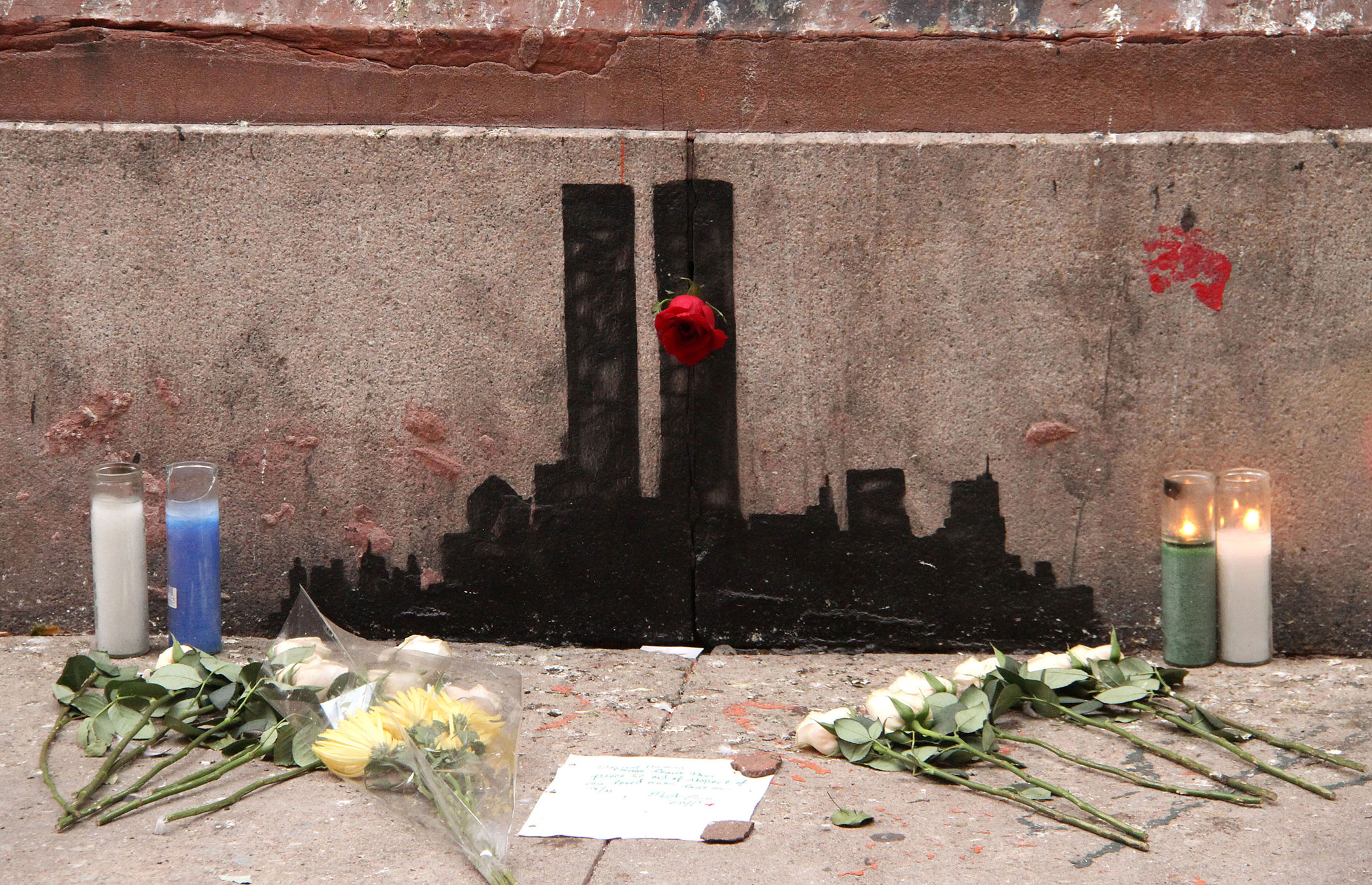 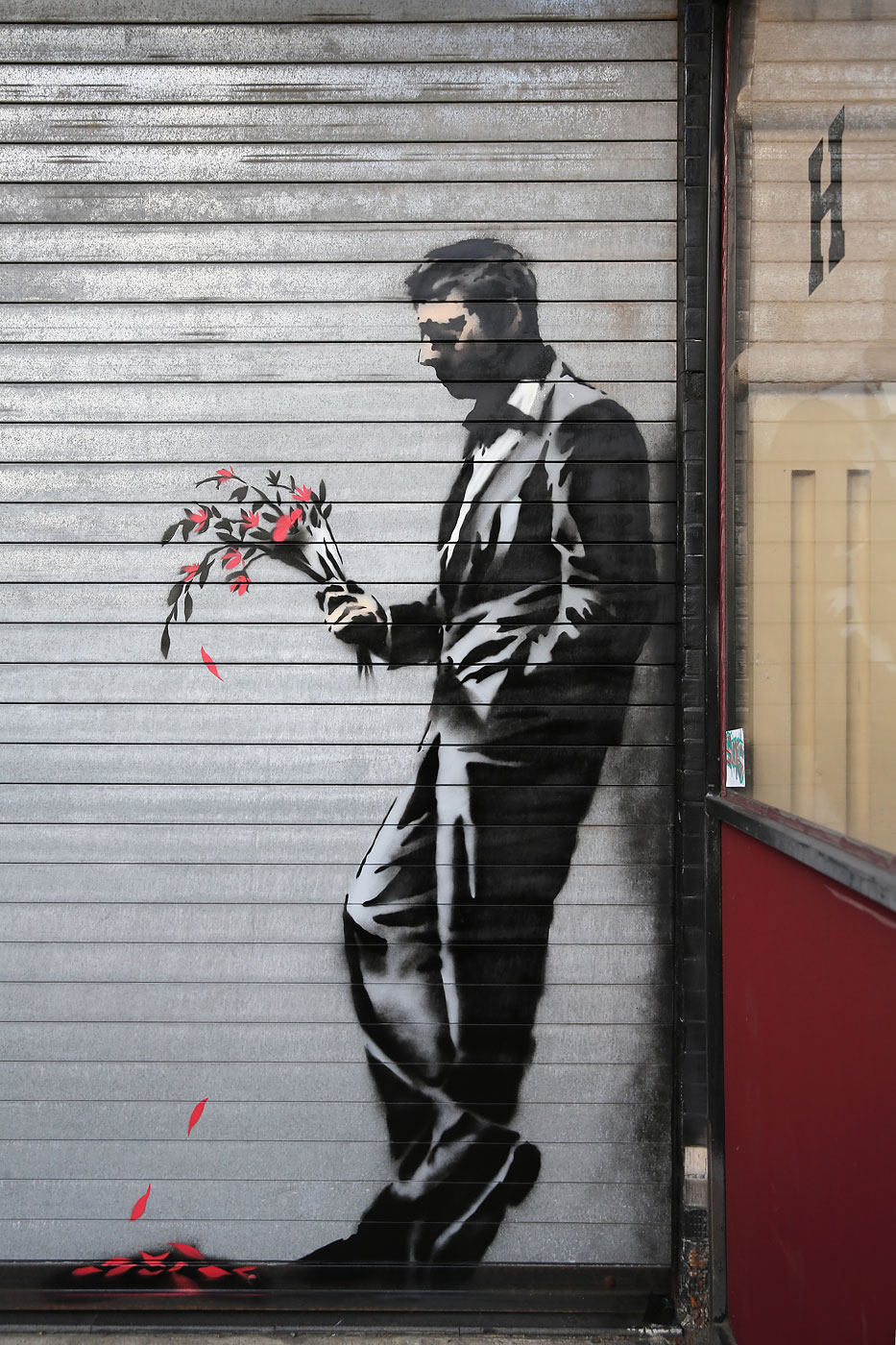 Banksy's "Waiting in vain...at the door of the club." is seen on a roll-down security gate covering the main entrance to Larry Flint's Hustler Club on October 24, 2013 in New York City.
John Moore—Getty Images 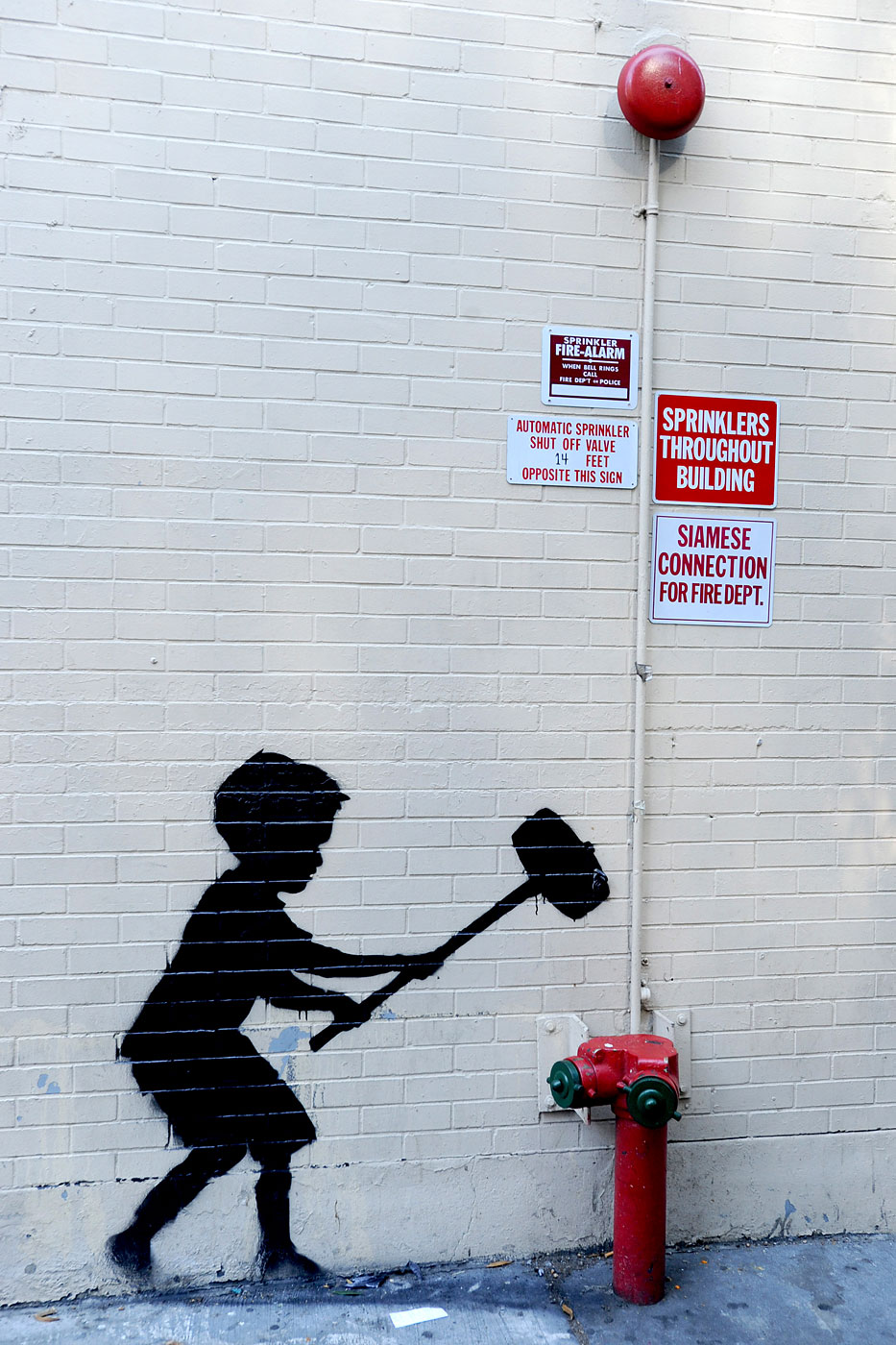 A Banksy depicting a silhouette of a hammer boy playing 'strong man' in the Upper West Side of new York City, October 20, 2013.
Dennis Van Tine—Geisler-Fotopres/picture-alliance/dpa/AP 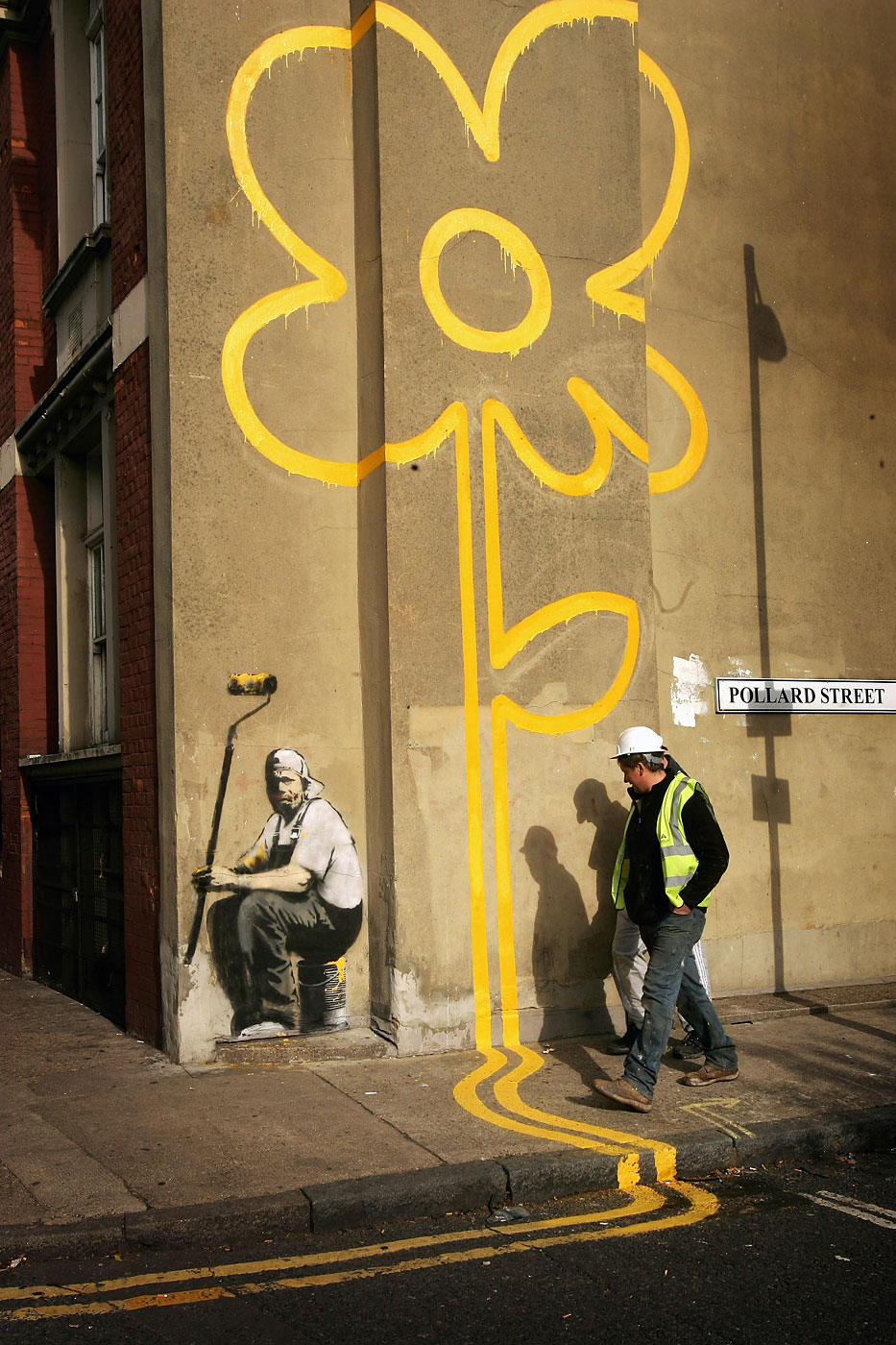 Builders walk past a Banksy on Pollard Street on November 1, 2007 in London, England.
Chris Jackson—Getty Images 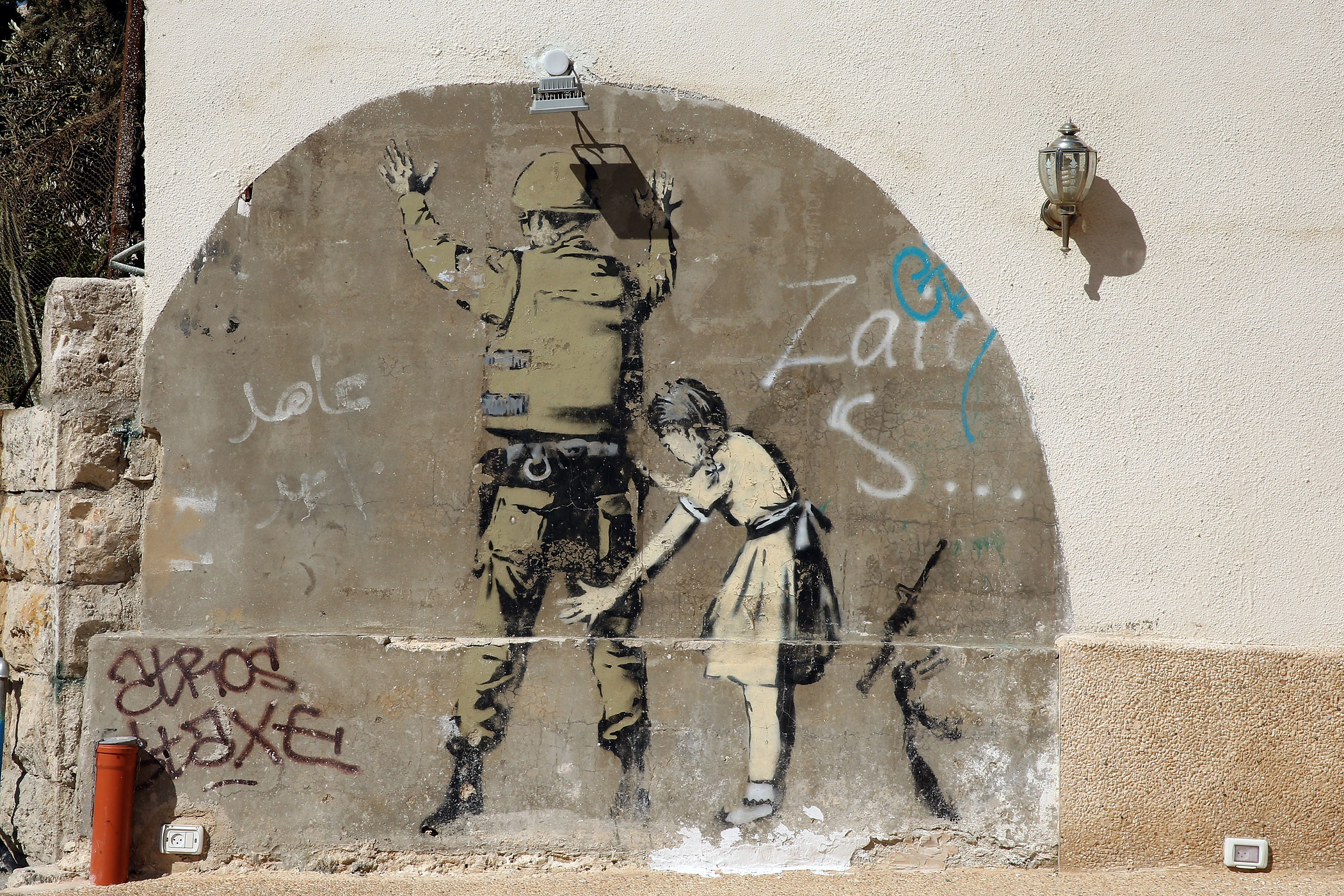 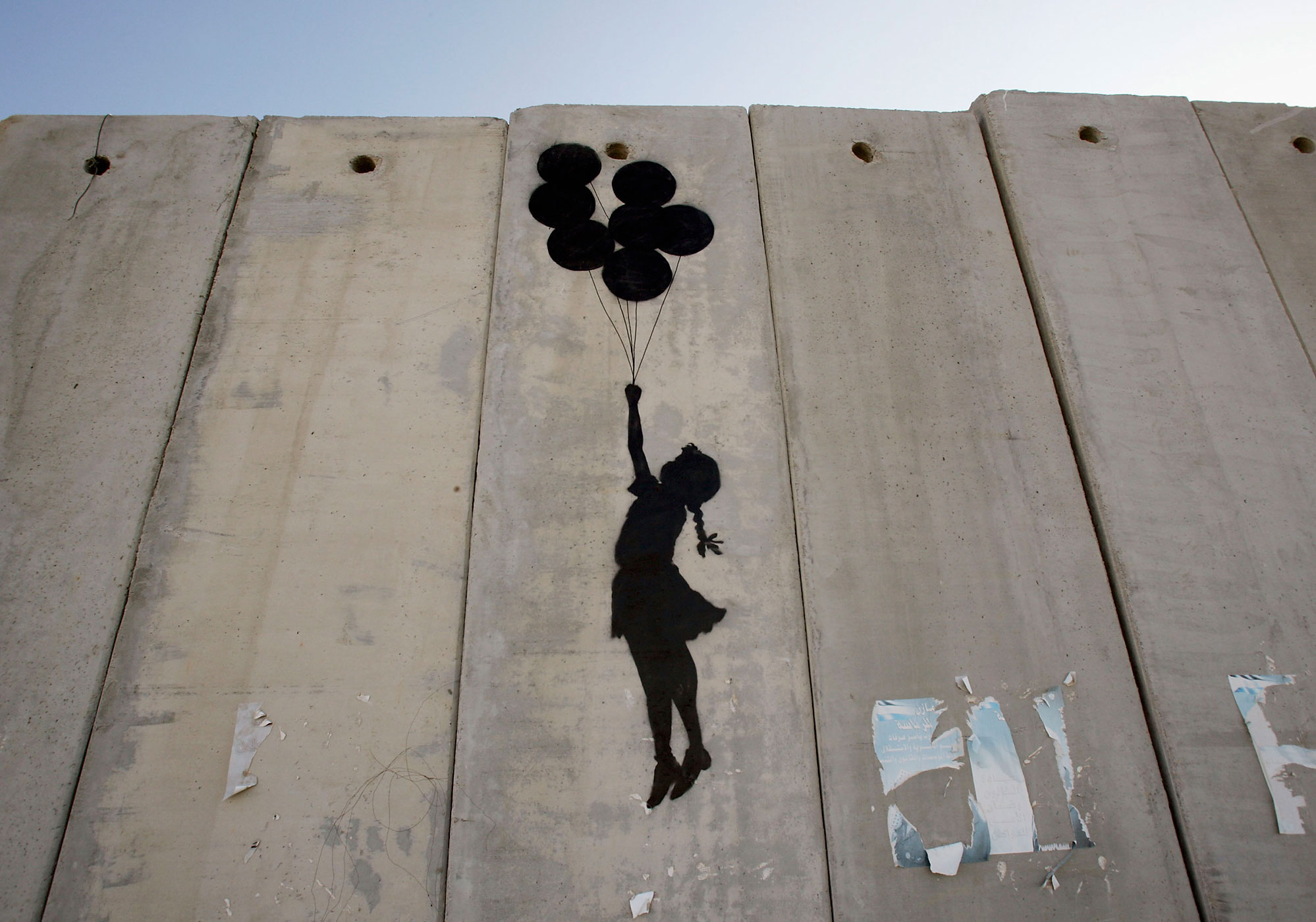 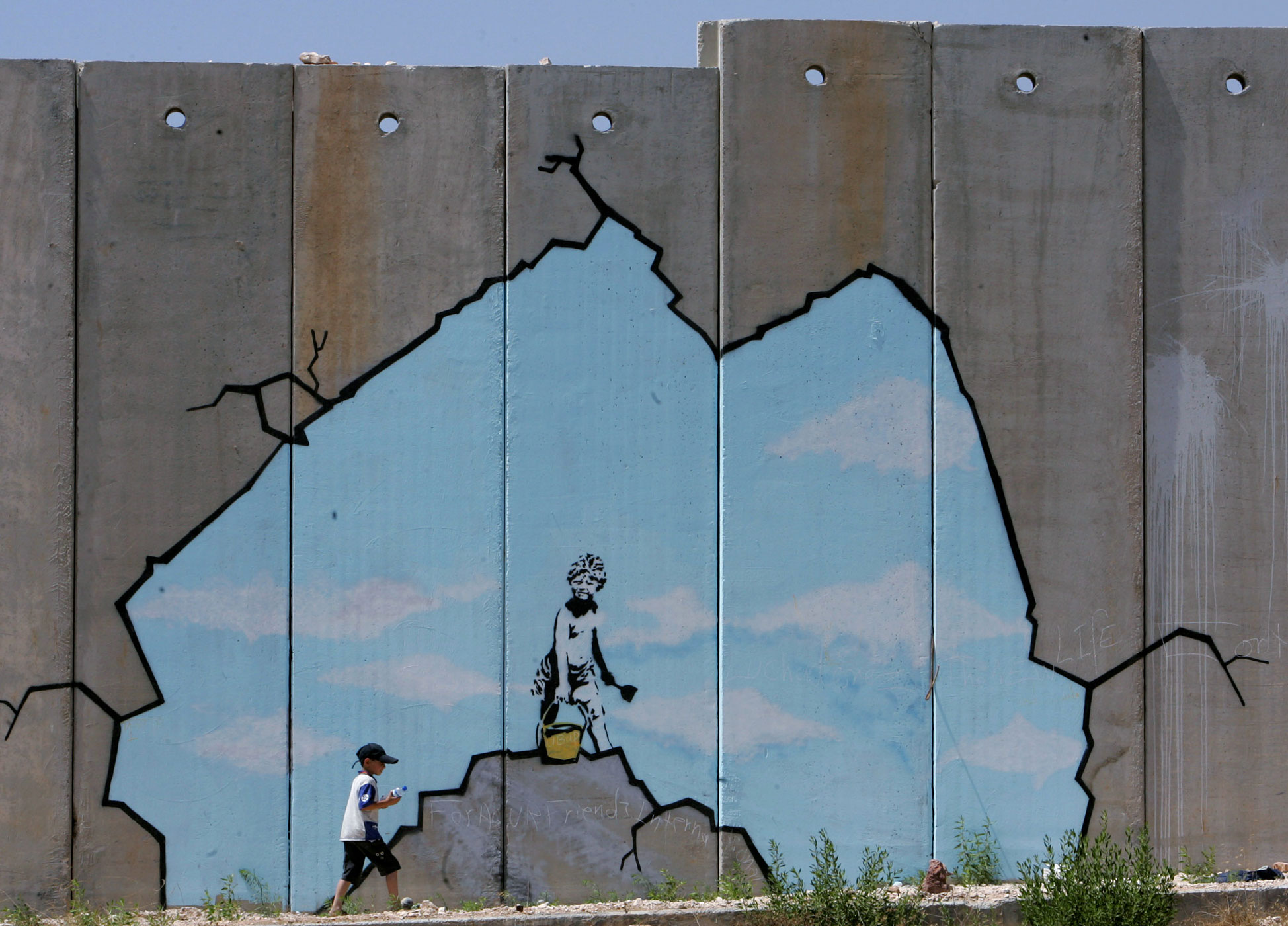 A Palestinian boy walks past a work by Banksy near the Kalandia checkpoint in the West Bank on August 10, 2005.
Ammar Awad—Reuters 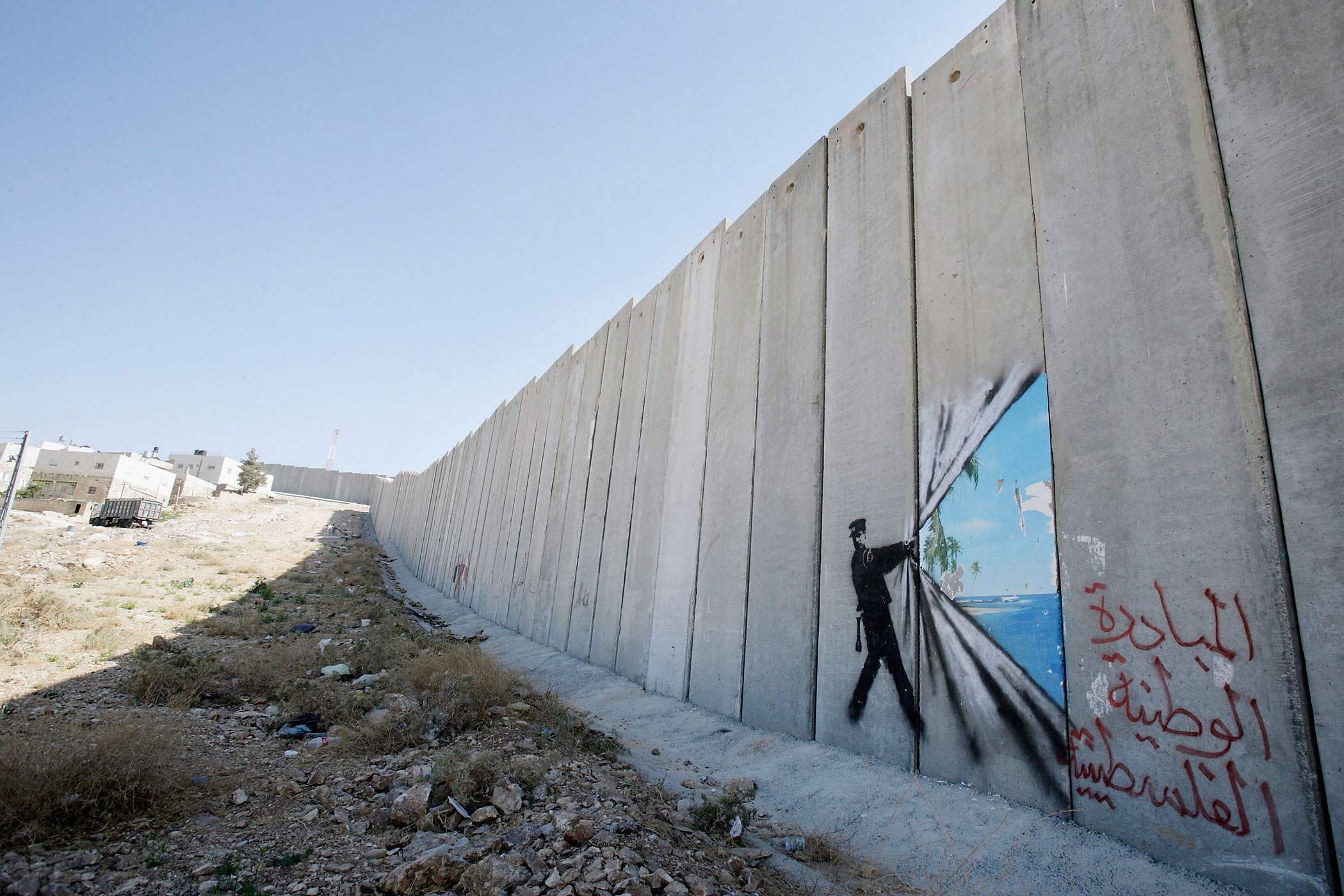 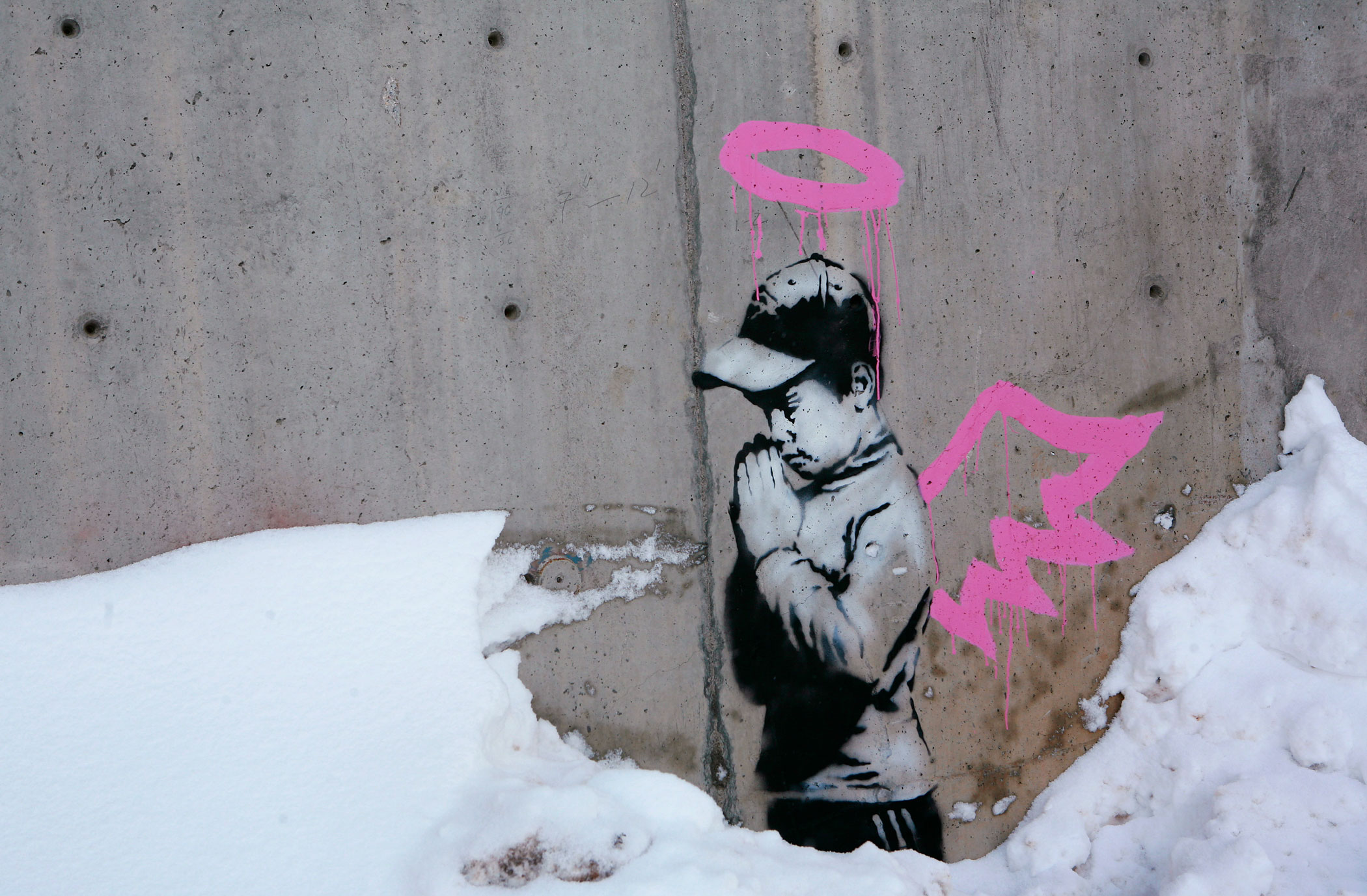 Artwork by Banksy is seen on a wall during the Sundance Film Festival in Park City, Utah, January 22, 2010.
Robert Galbraith—Reuters 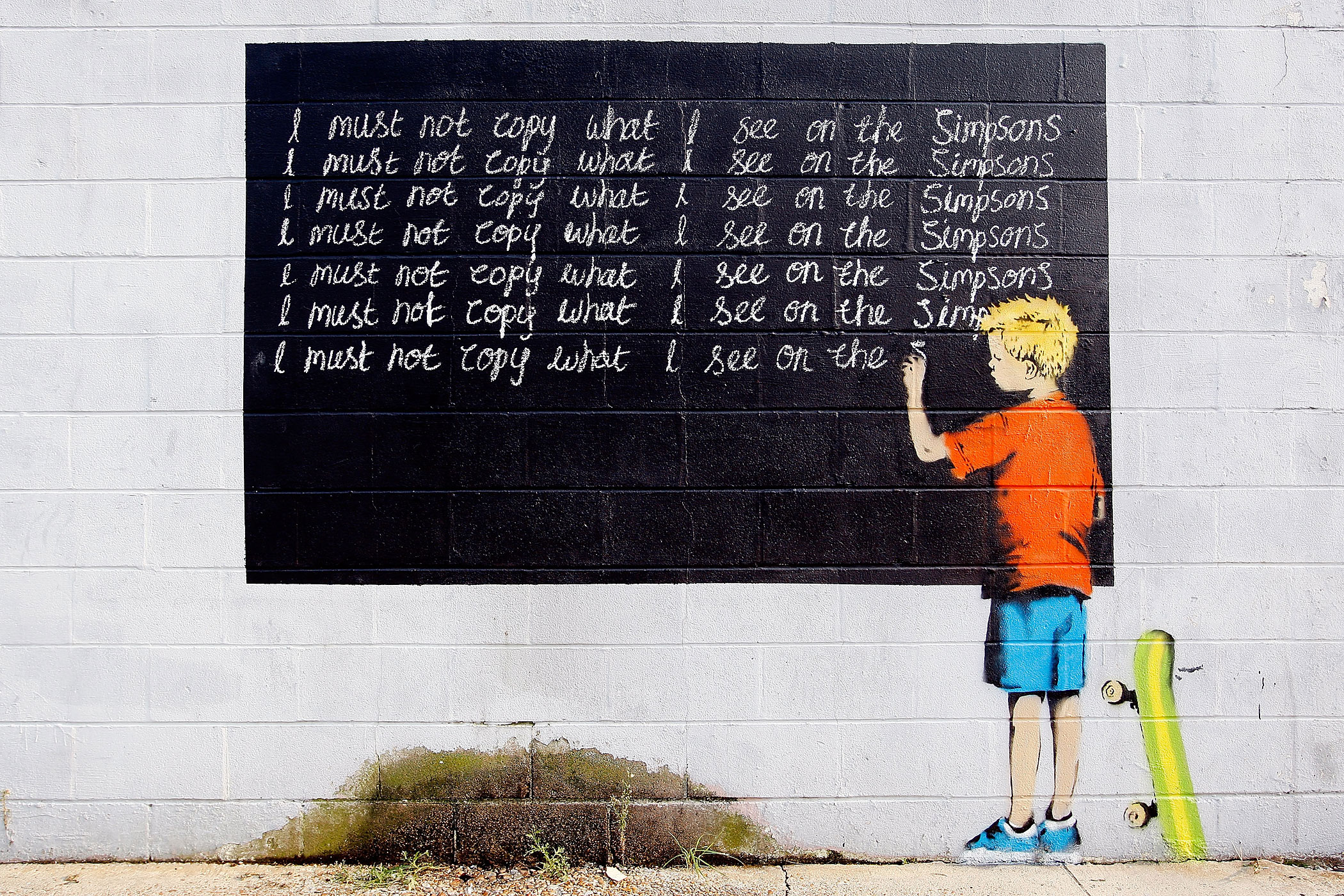 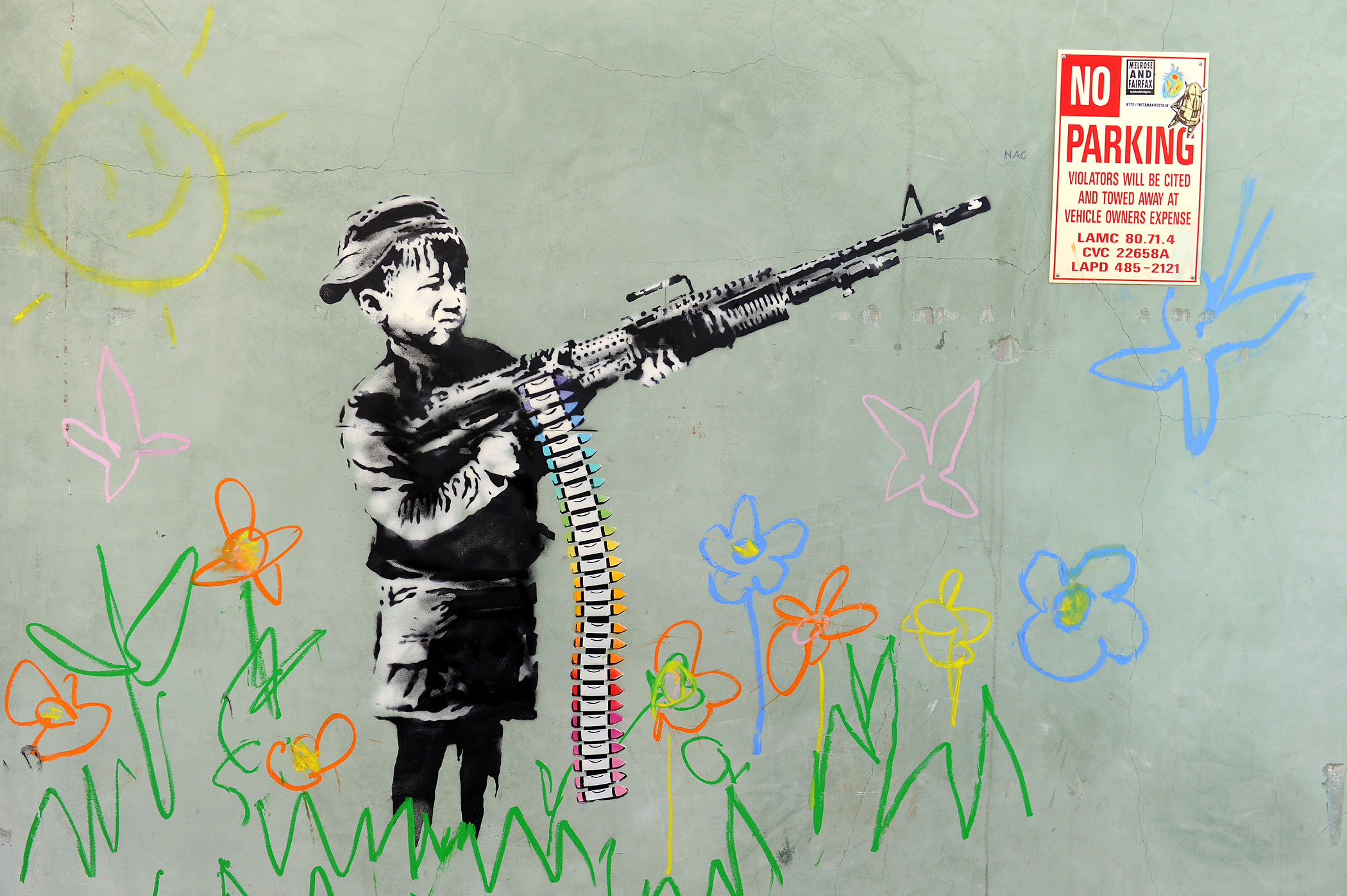 A Banksy depicting a child wielding a machine gun, in black and white surrounded by colored flowers, is spotted in Westwood, Ca. on February 17, 2011.
Gabriel Buoys—AFP/Getty Images 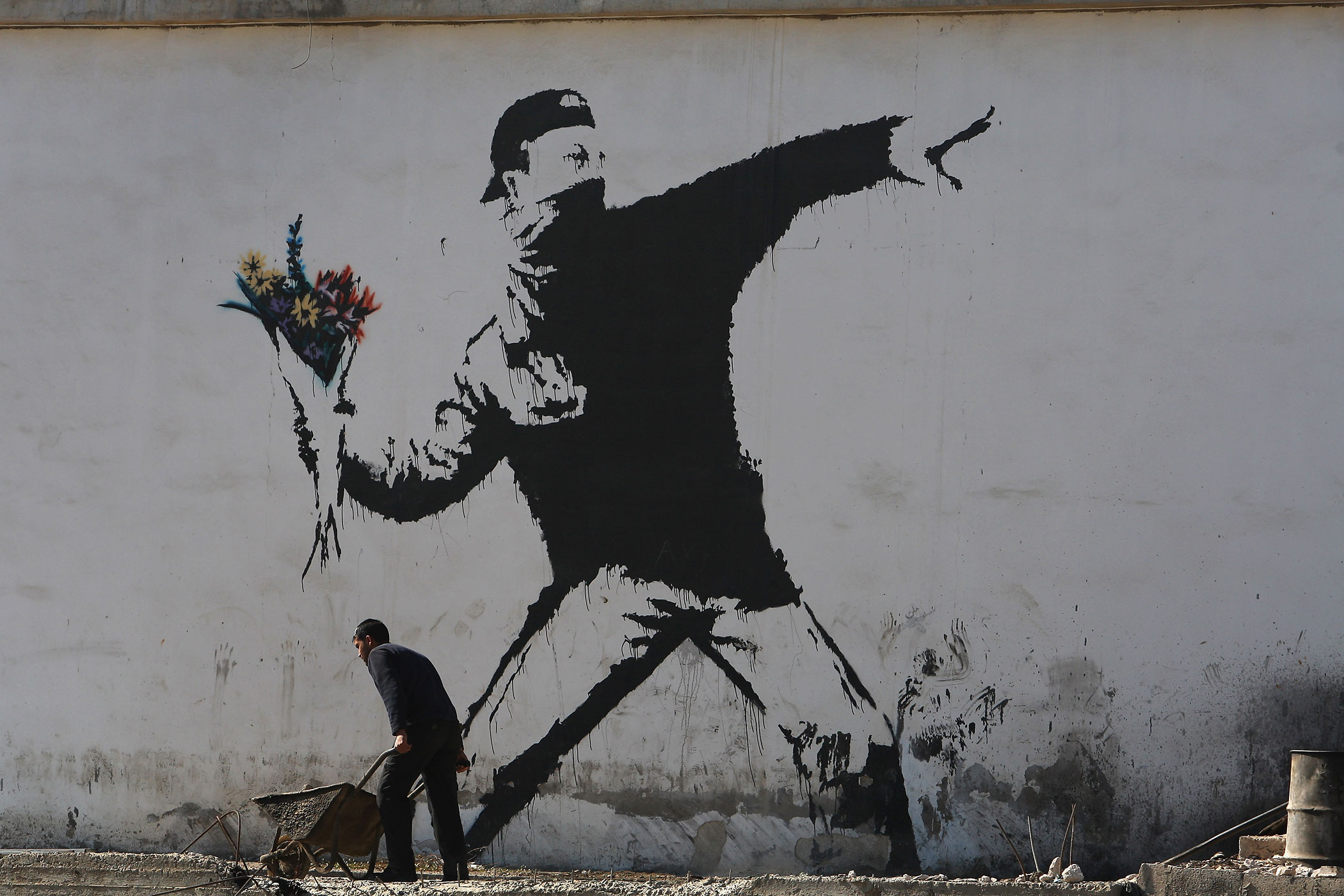 A Palestinian laborer works under a large wall painting by Banksy on December 5, 2007 in Bethlehem in the West Bank.
David Silverman—Getty Images 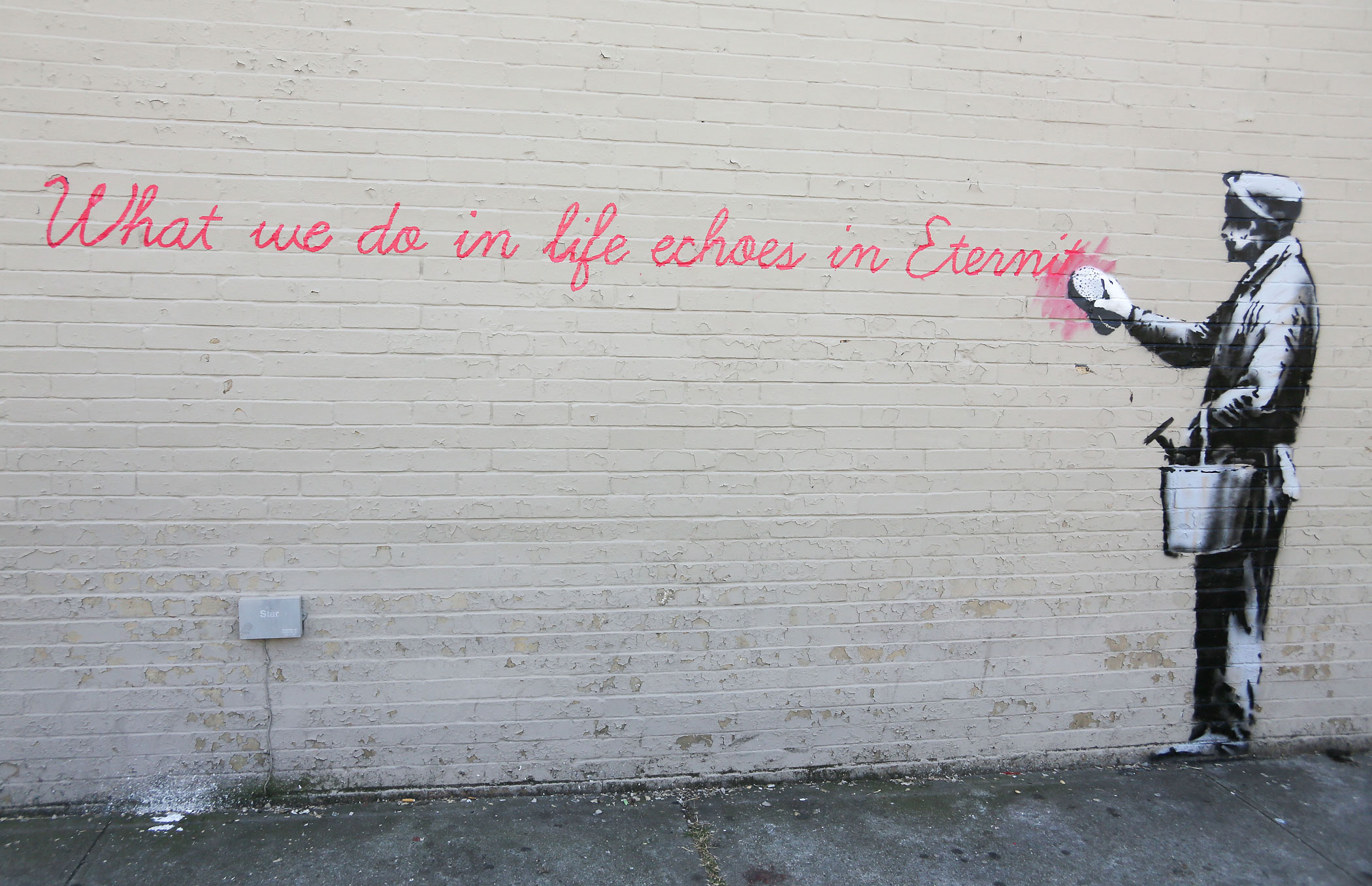 Banksy's 'What we do in life echoes in Eternity' seen in New York City on Oct. 14, 2013.
Erik Pendzich —Demotix/Corbis 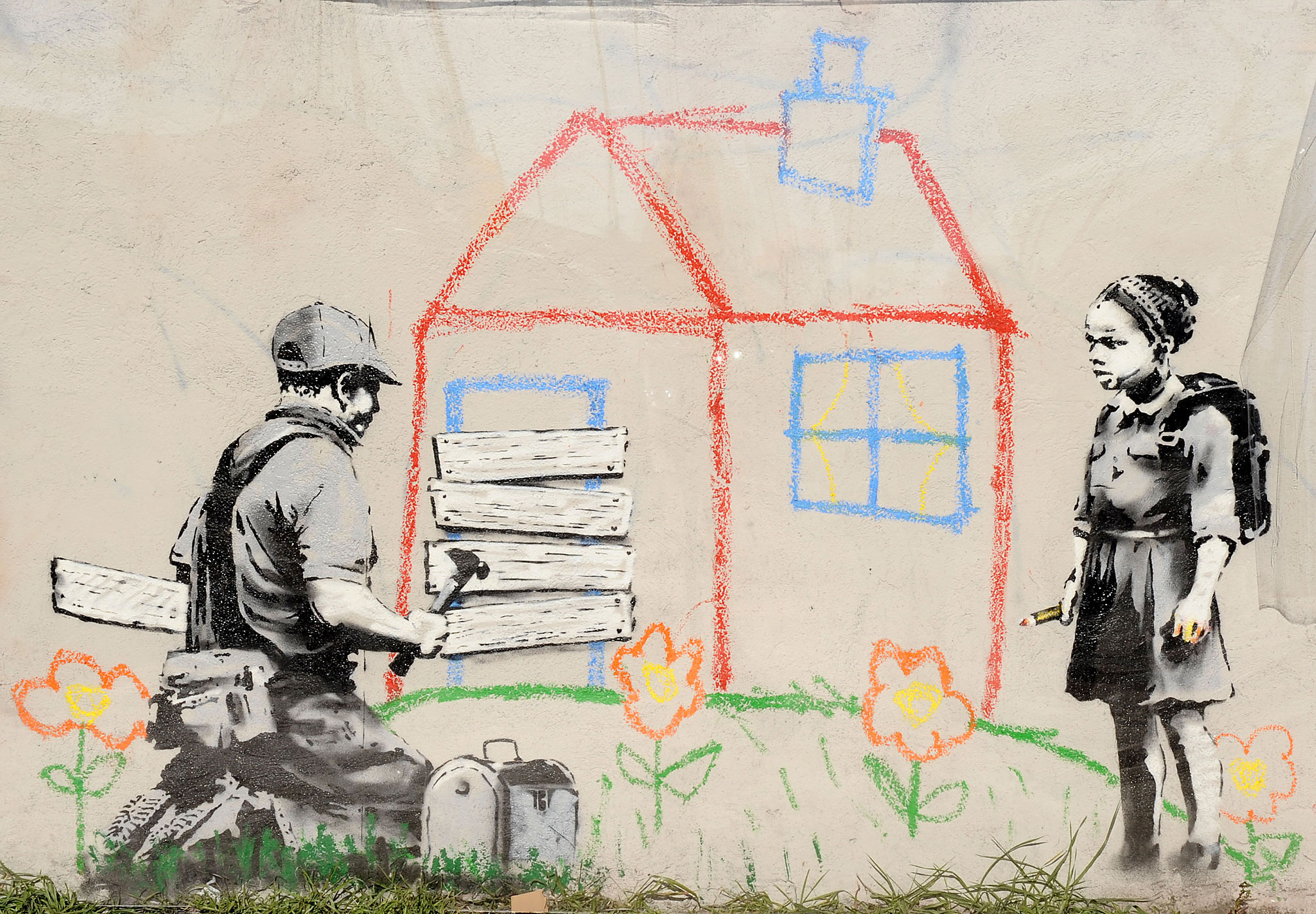 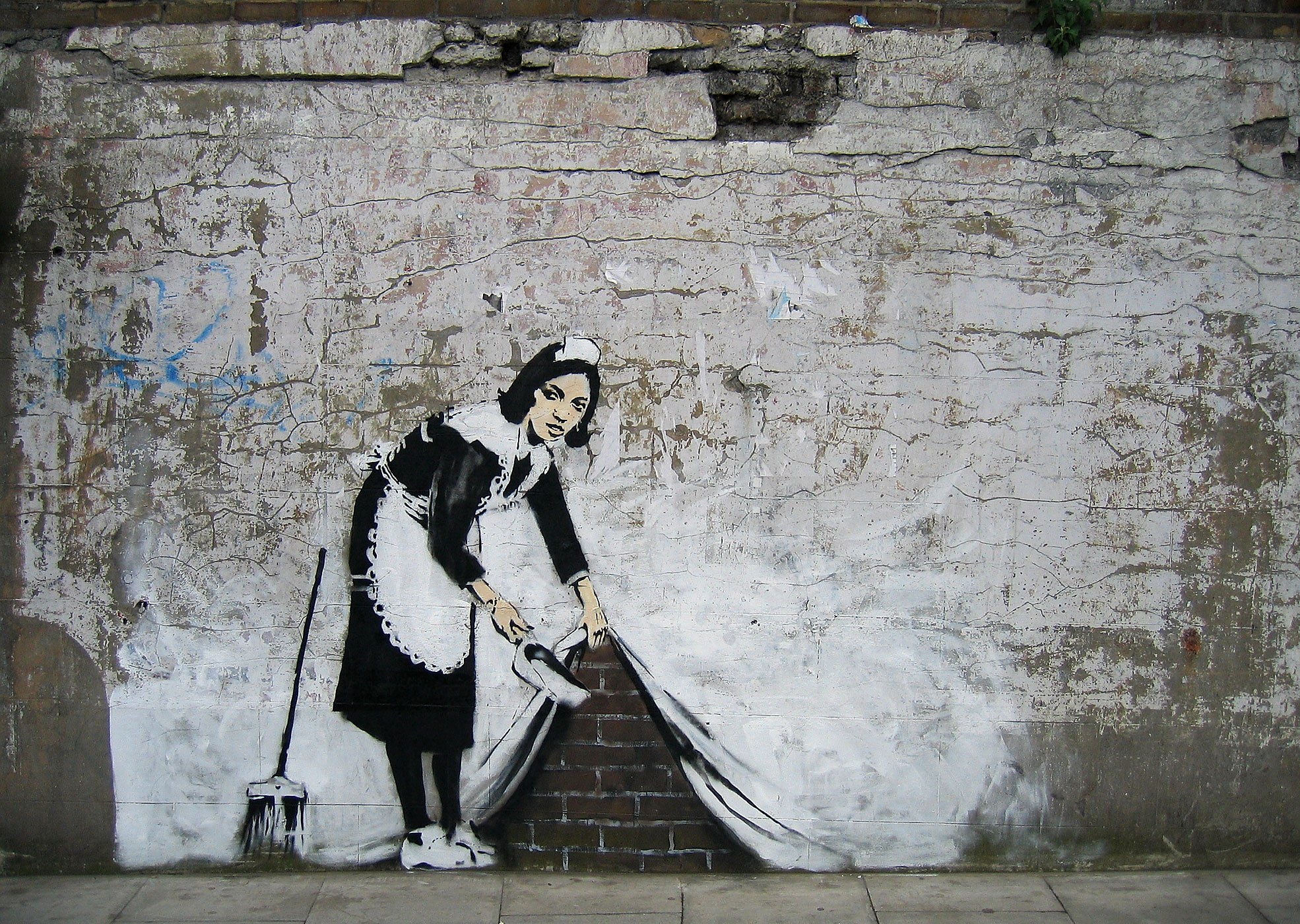 Banksy's 'Sweeping It Under The Carpet' is seen in London, England on May 16, 2006.
Jim Dyson—Getty Images 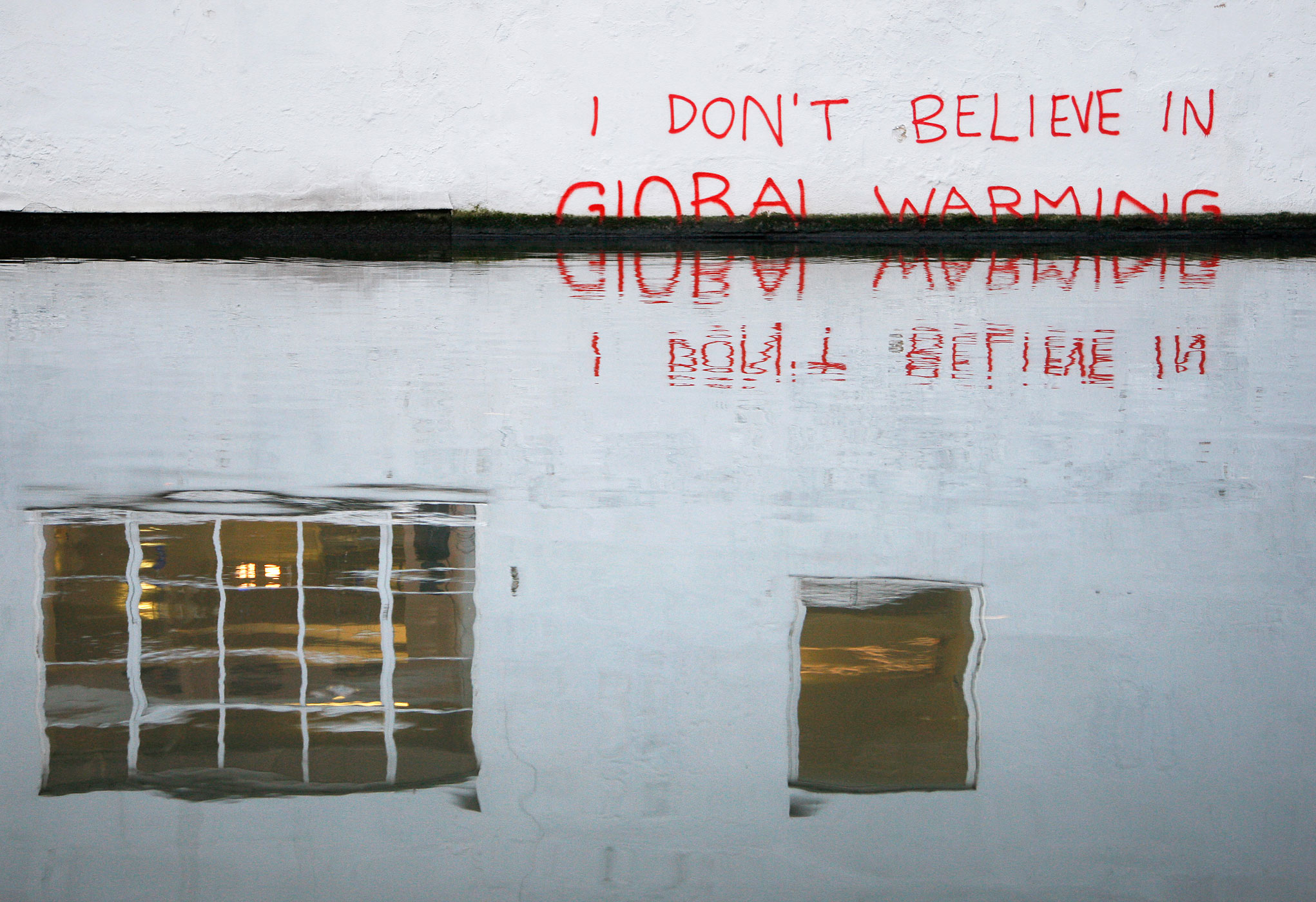 A Banksy is seen on a wall next to the Regent's Canal, in Camden in London on December 22, 2009.
Luke MacGregor—Reuters 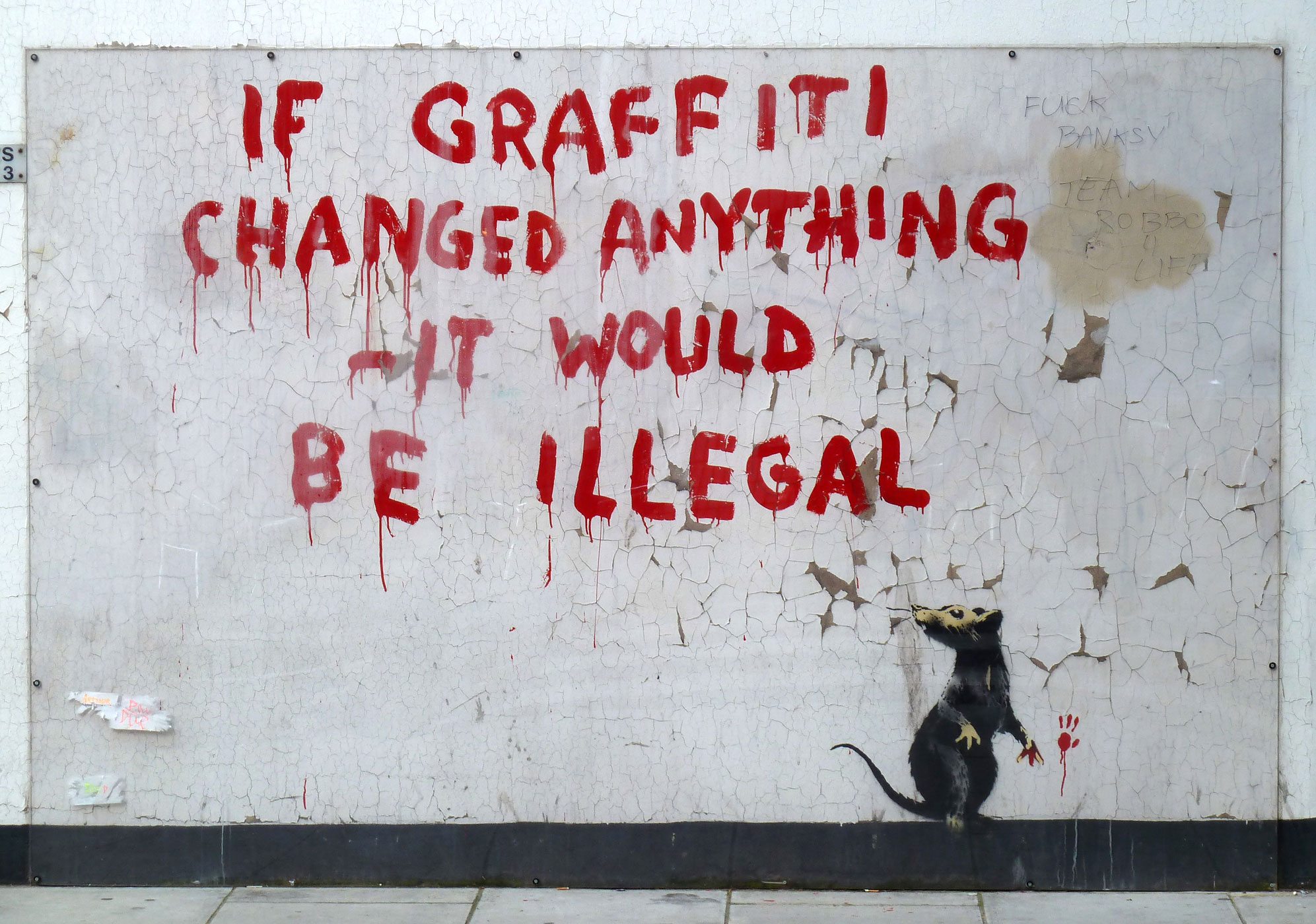 A Banksy appears in the neighborhood of Fitzrovia in London, England on October 6, 2011.
Jim Dyson—Getty Images 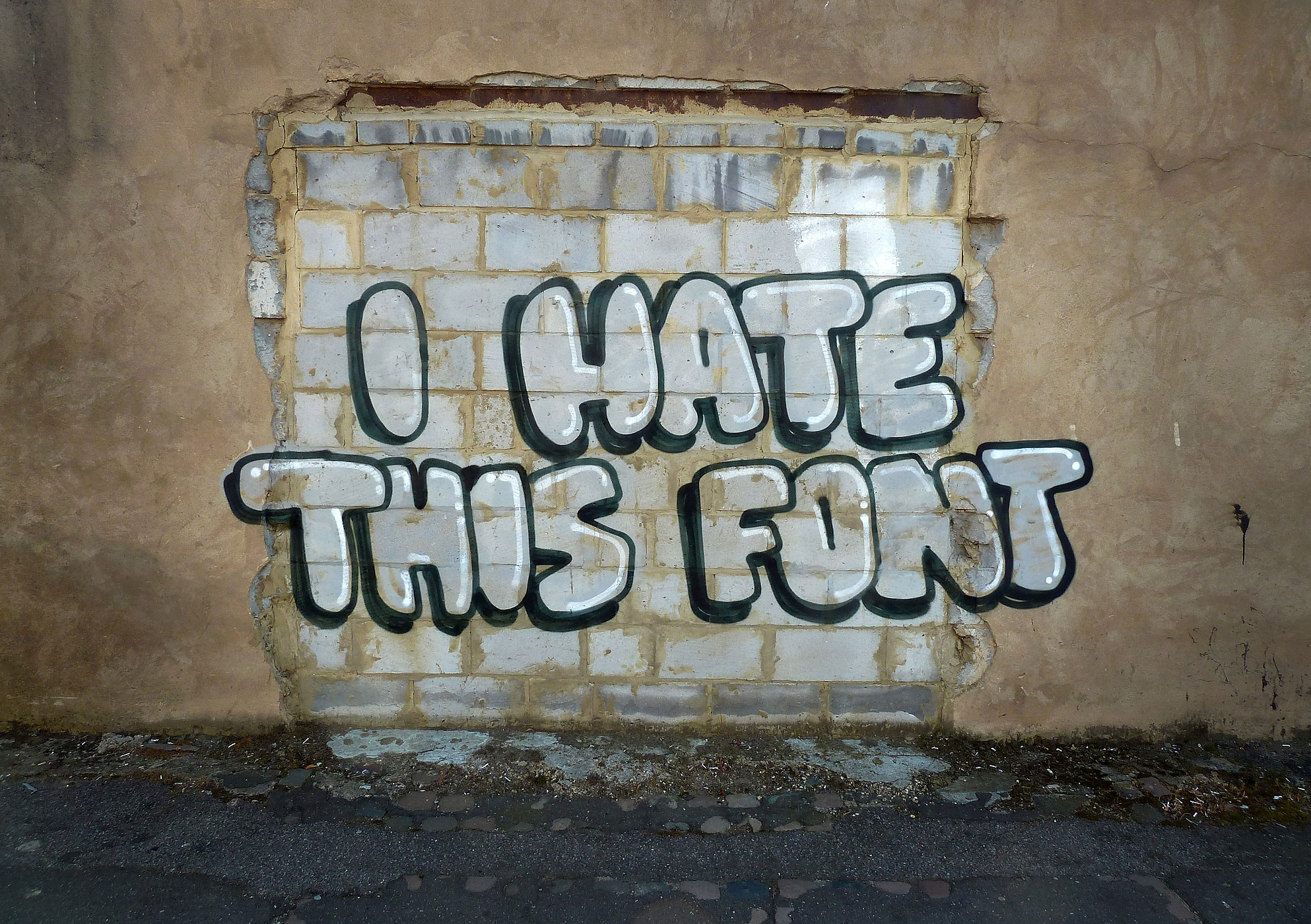 A Banksy is pictured in North London on August 20, 2012.
Jim Dyson—Getty Images 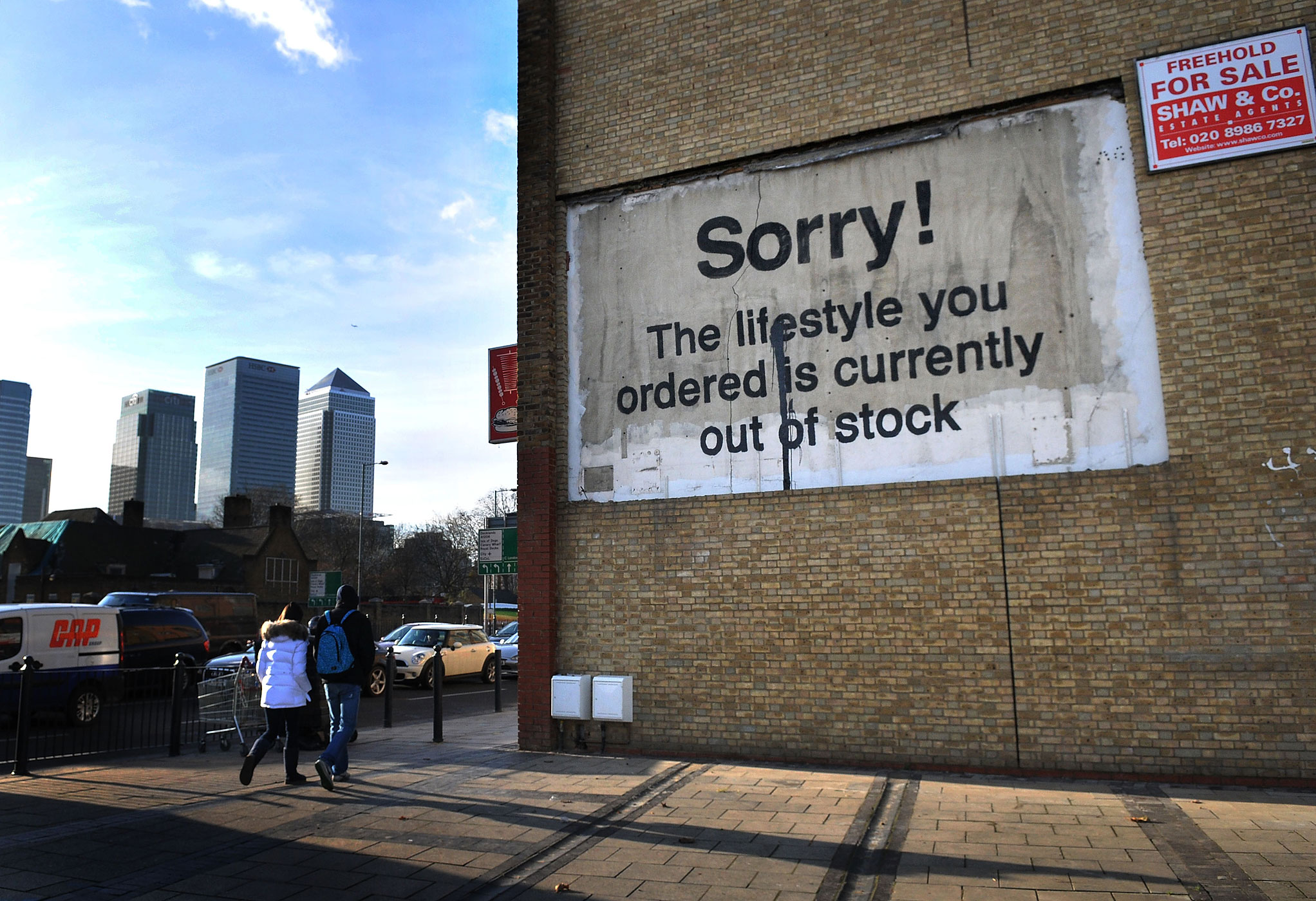 A Banksy is seen in East London, on December 20, 2011.
Jim Dyson—Getty Images 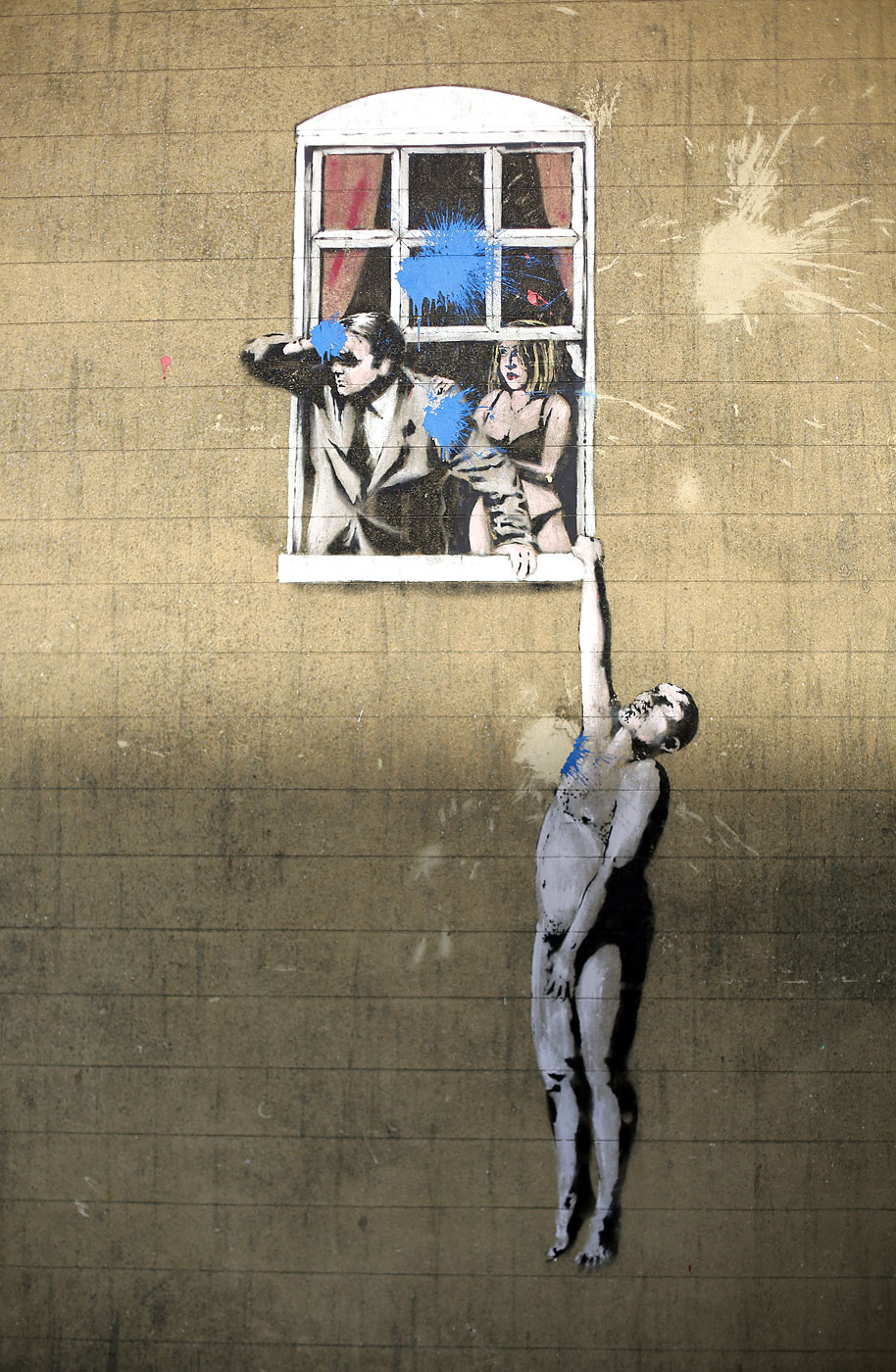 A mural by Banksy, which has been defaced by blue paint bombs, is seen on the side of a building in Park Street on March 4, 2013 in Bristol, England.
Matt Cardy—Getty Images 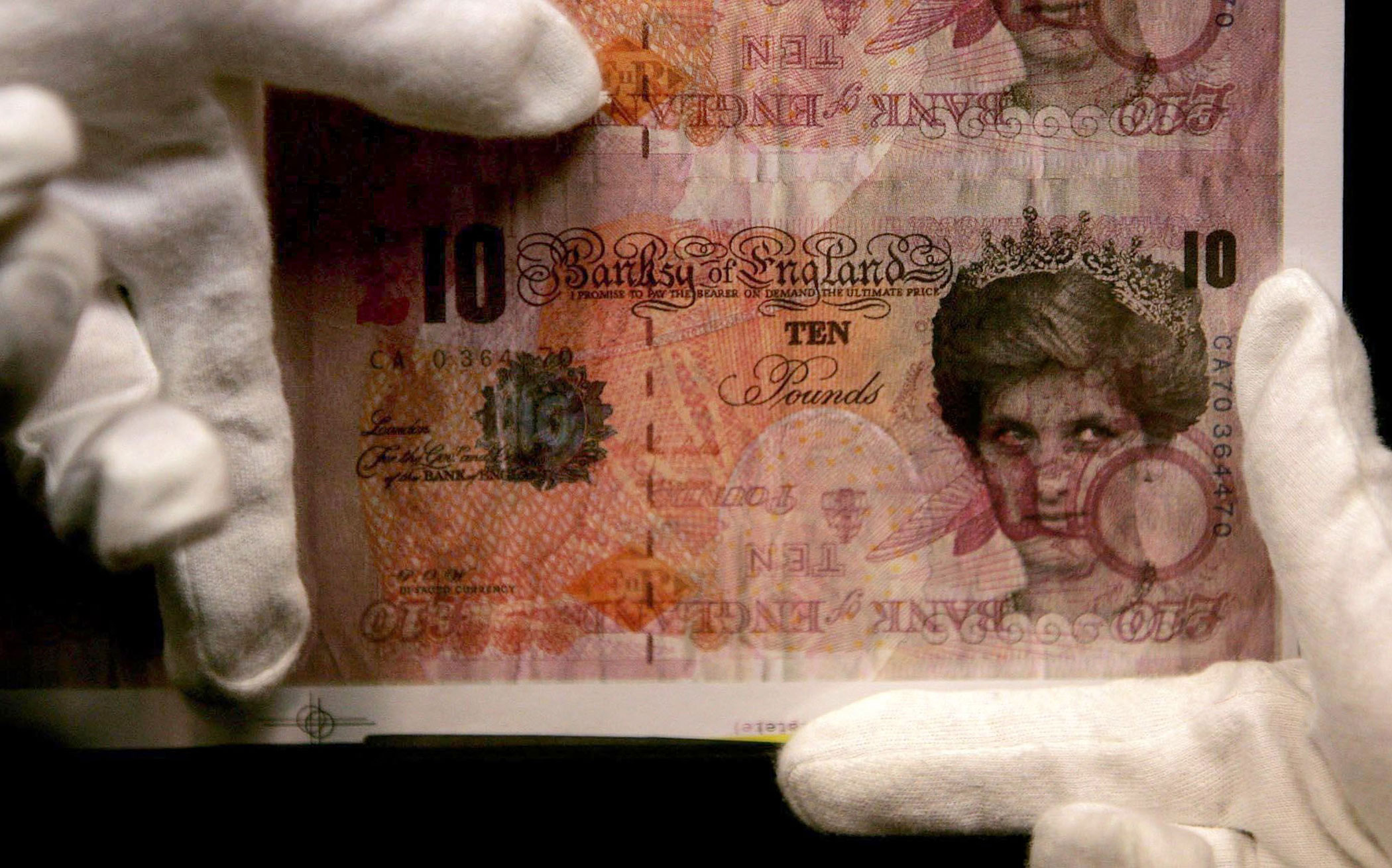 A screen print titled 'Di Faced Tenners' showing the face of Princess Diana in place of Britain's Queen Elizabeth II is one of ten Banksy pieces on display in Bonhams Auction House in London on Monday, Oct. 22, 2007
Cathal McNaughton—PA/AP 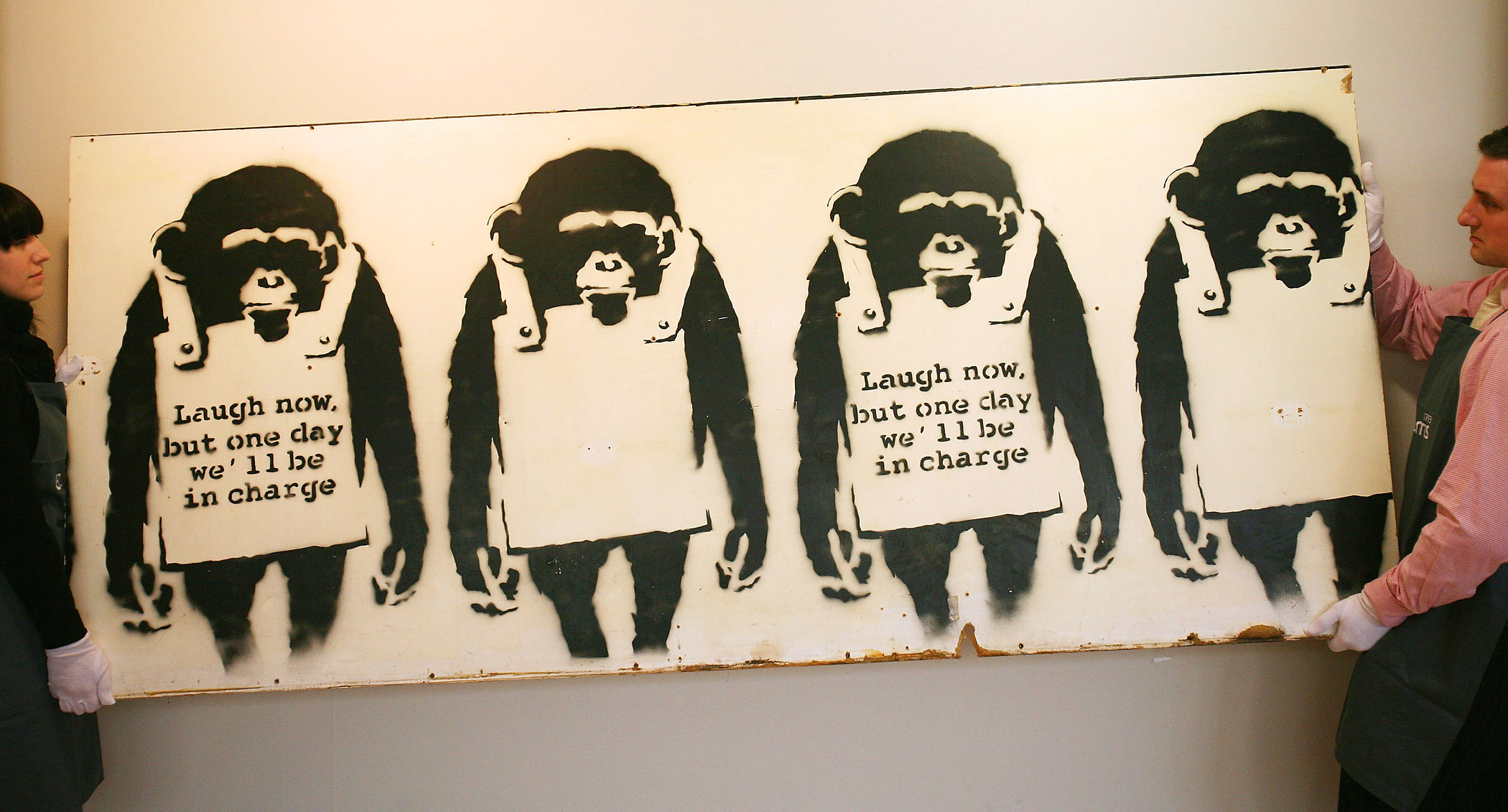 Banksy's Laugh Now is held by a Bonham's employee's during a viewing for the World's First Urban Art Auction at Bonham's on January 22, 2008 in London, England.
Daniel Berehulak—Getty Images 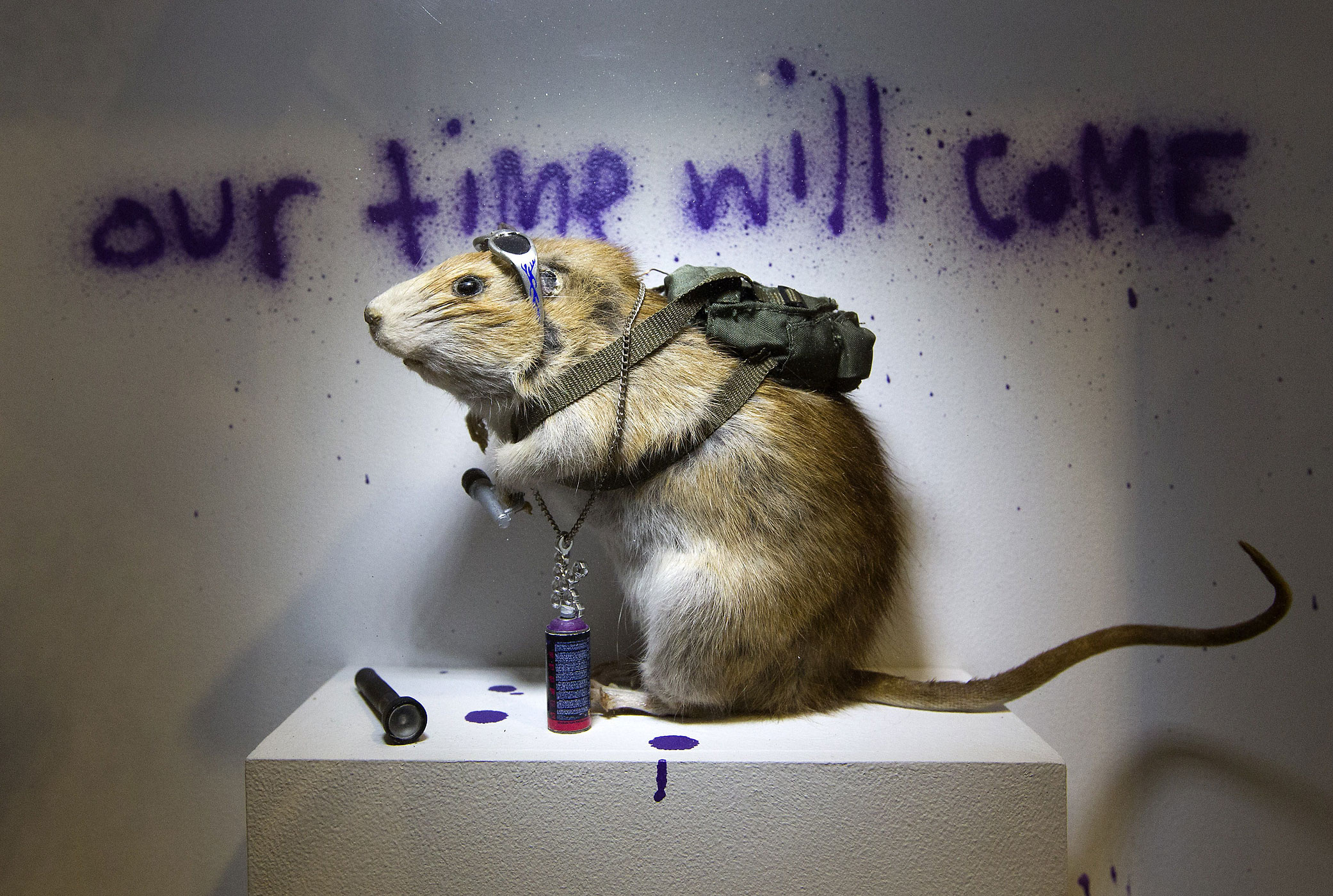 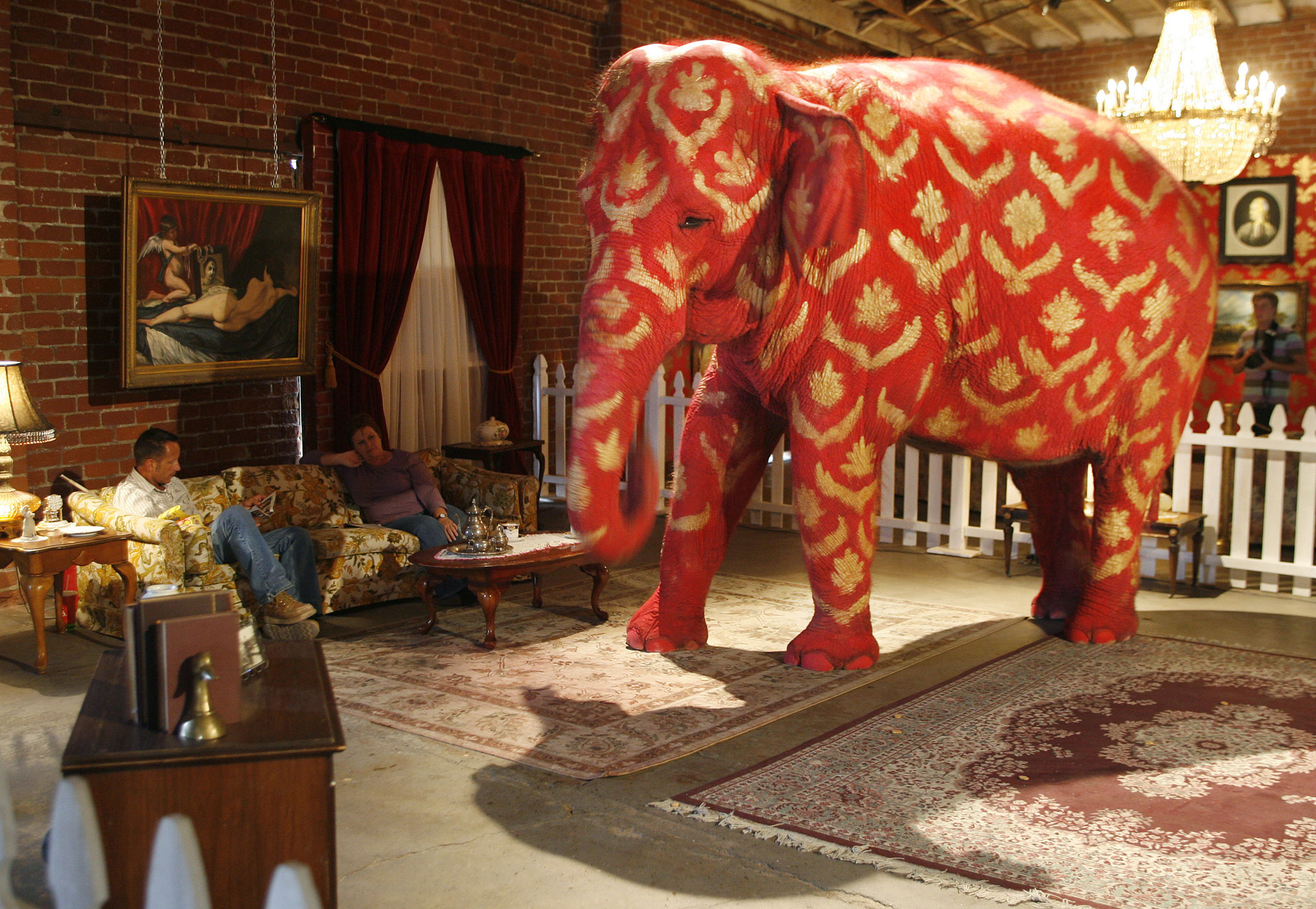 Tai, a 38-year-old Asian elephant, painted by Banksy, is displayed at the "Barely Legal" exhibition at a warehouse near downtown Los Angeles on September 15, 2006.
Fred Prouser—Reuters 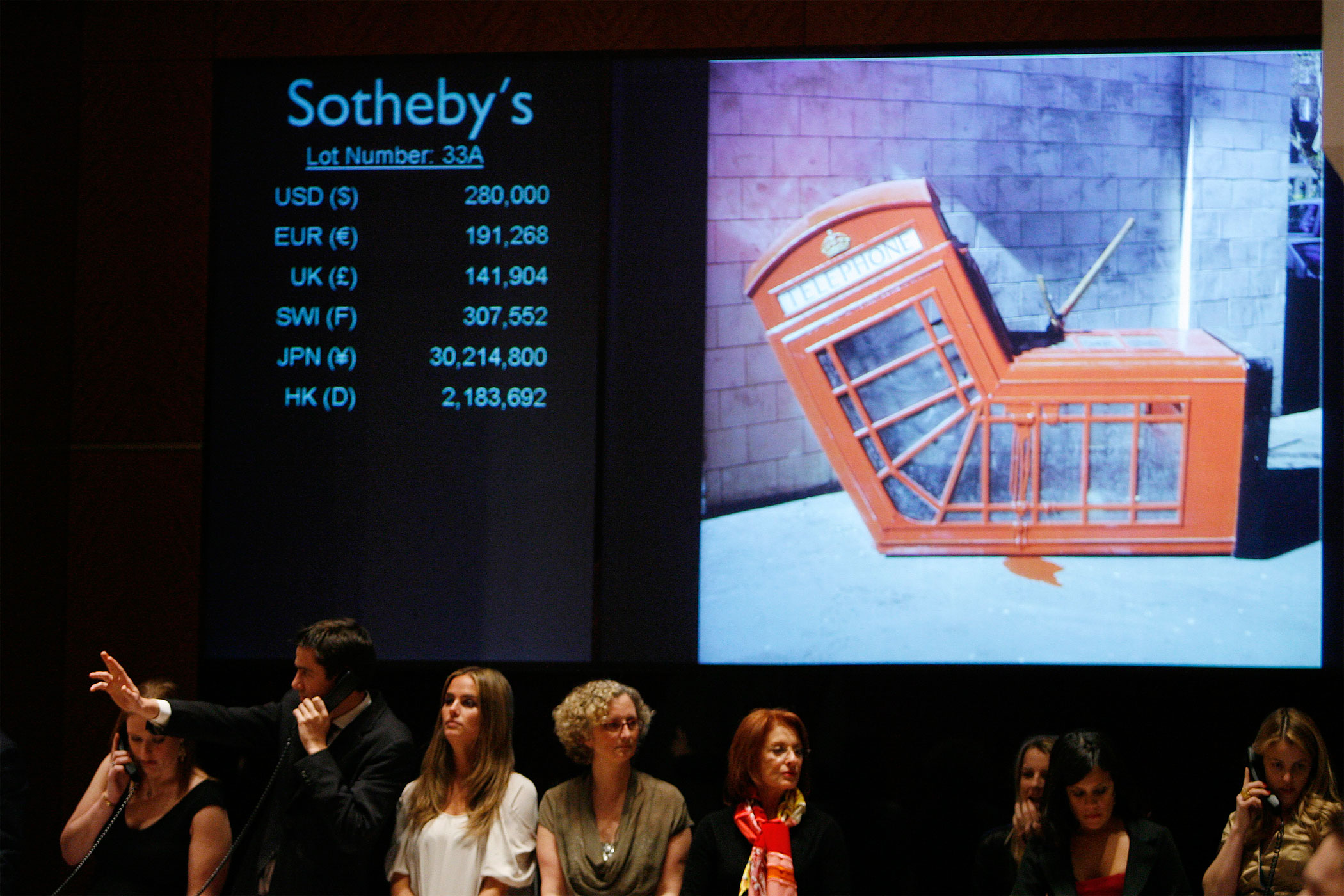 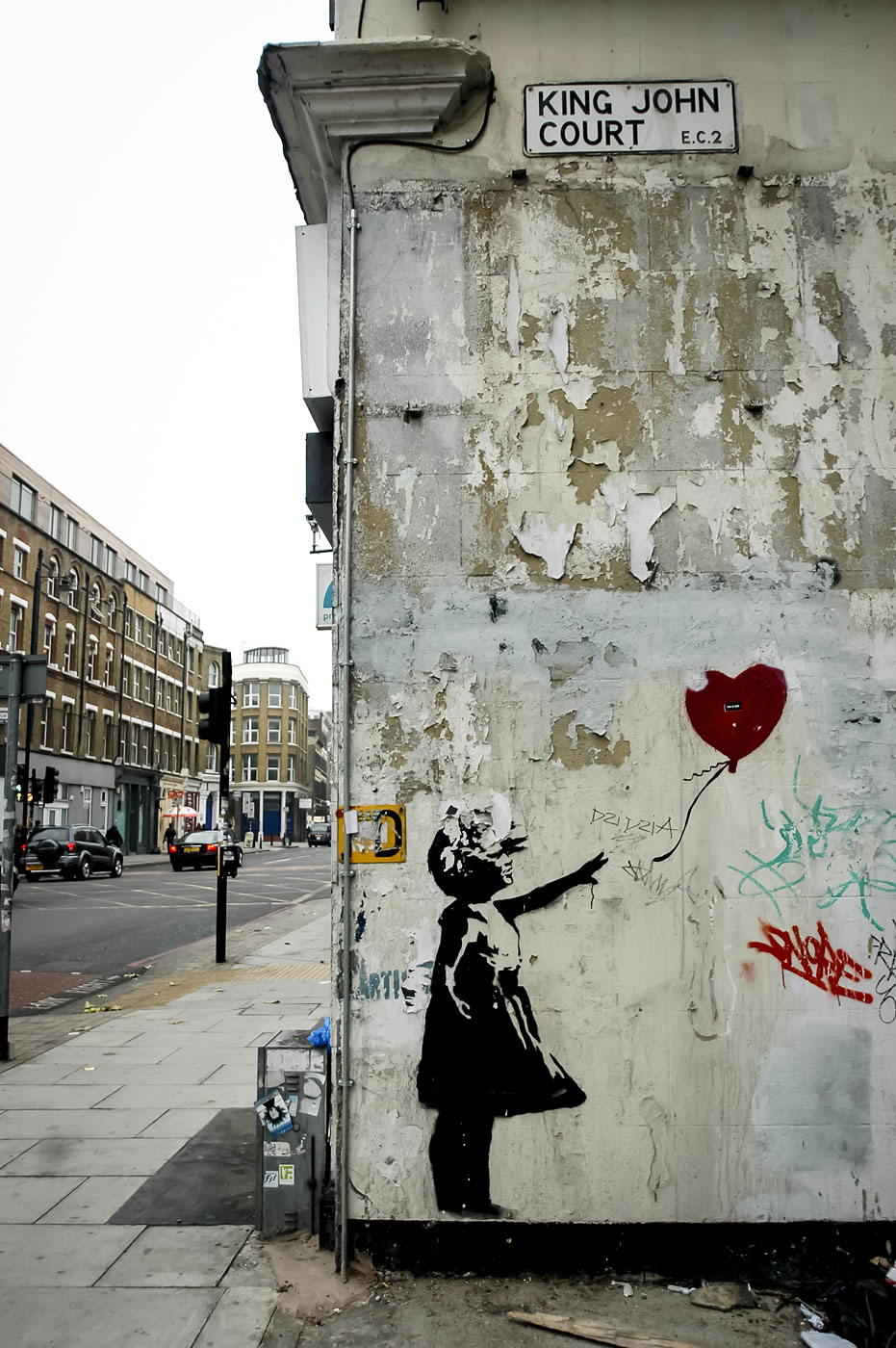 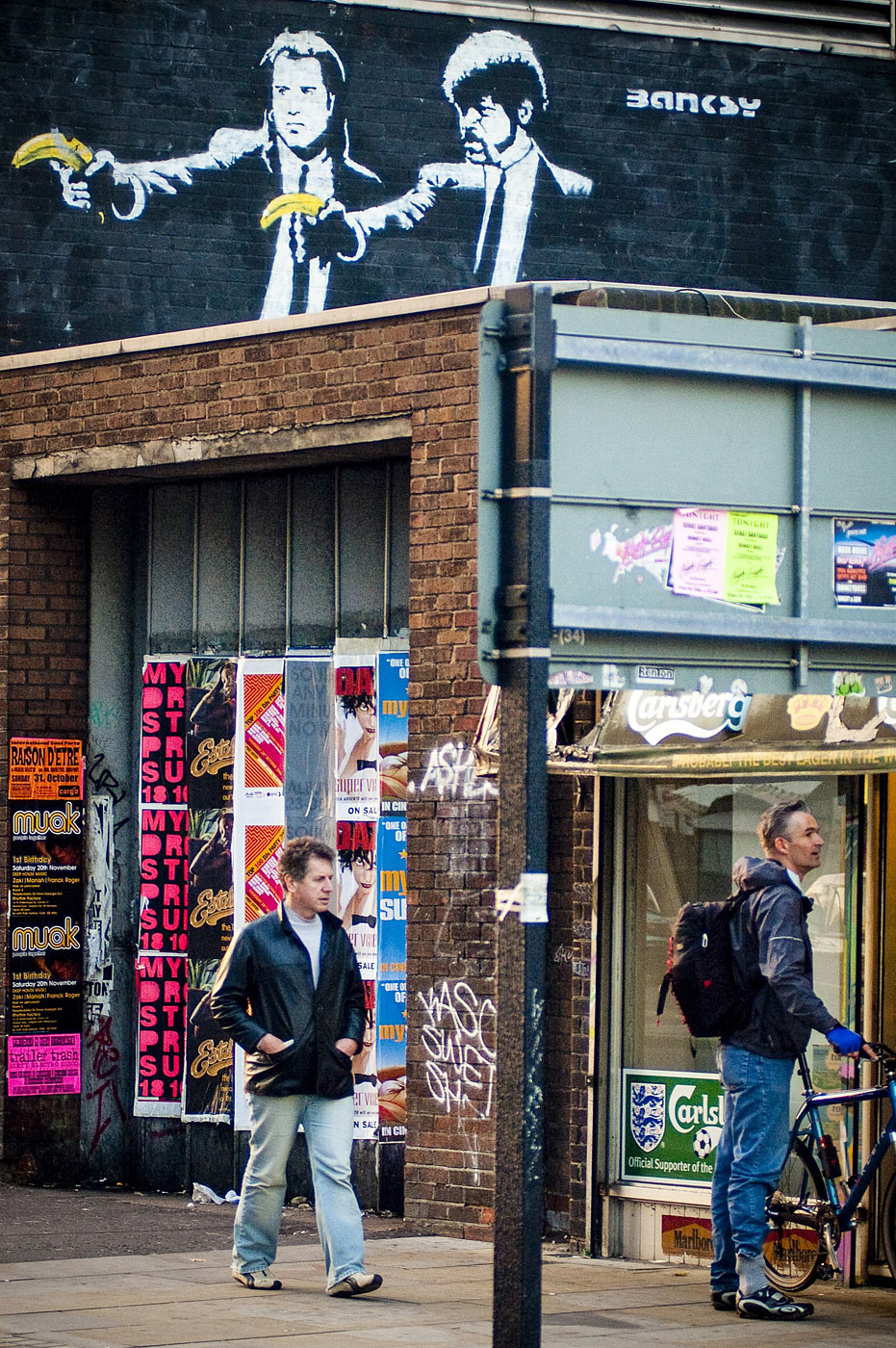 A Banksy inspired by Pulp Fiction is seen in London, England on Nov. 30, 2005.
PYMCA/UIG/Getty Images
1 of 29
Advertisement