Boxing’s “Fight of the Century,” between undefeated Floyd “Money” Mayweather and Manny Pacquiao, takes place in Las Vegas on Saturday night, and one thing is clear: there’s plenty to loathe about the whole event. First off, the bout should have happened six years ago, when Mayweather, now 38, and Pacquiao, 36, were in their primes. But greed, ego and obstinance got in the way. The promoters are selling payoff: this is the fight you’ve been waiting years for! Finally, the moment has arrived! Buckle up! But really, they’re pushing waste. This should be the third or fourth Fight of the Century; a series of Mayweather-Pacquiao clashes could have re-energized the sport.

Plus, Mayweather’s a pretty unctuous fellow. He’s a convicted abuser of women. He’s been found guilty or pleaded guilty to battery five times in the past 14 years. And when questioned about these incidents, Mayweather dodges, changing the subject to the bout. The message: stop nagging about domestic violence, it’s a distraction on the road to more riches.

It’s detestable. If you’d rather not fork over $100 to support Mayweather, that’s an eminently rational move. You may also not want to line the pockets of Pacquiao, and his brand of politics: as a congressman in his native Philippines, Pacquiao is against gay marriage and has called condoms “sinful.”

But millions of people will watch the fight anyway, because Americans have a history of suspending moral judgement in the name of entertainment: we may hate Mayweather, but we love uppercuts (Mike Tyson, don’t forget, still drew a crowd after being released from prison for rape). And Mayweather-Pacquiao could very well live up to the hype. They’re singular talents, the premier fighters of this generation. Come Sunday morning, we all might be breathless. It was worth the wait.

But then what? Where does boxing, a sport that makes a few fighters ludicrously rich while barely entering the cultural conversation for the rest of the year, go from here?

Greg Bishop of Sports Illustrated reports that according to people close to Mayweather, the champ will fight one more time after facing Pacquiao. After that, he’ll call it quits. Pacquiao is also nearing the end. Boxing is firmly invested in the mega-fight model—drive demand to a handful of boxers, keep their bouts behind the pay-per-view wall, let these fighters and their cronies hoard the profits. Boxing is finally back on network television, as NBC and CBS are broadcasting fights from the Premier Boxing Champions promotion: NBC’s most recent telecast, the night of April 11 —a Saturday—drew 2.9 million viewers. By comparison, a Florida State-Notre Dame regular season college football game that aired on ABC on a Saturday night in October drew 13.25 million viewers.

Boxing’s jump back onto the network TV probably came too little, too late. Viewers forgot about the sweet science—and are satisfied with all of the other entertainment options that have emerged over the last two decades, including mixed martial arts. There’s no urgency to watch two unfamiliar fighters on a Saturday night.

Mayweather-Pacquiao will set all kinds of financial records; it’s projected to produce $72 million in ticket revenue, more than tripling the previous high for a prize fight. Mayweather, already the highest-paid athlete in the world, according to Forbes, will take some $180 million of the projected $300 million purse, with Pacquiao earning the rest. But these riches can’t buy any love—neither for Mayweather, nor his sport. 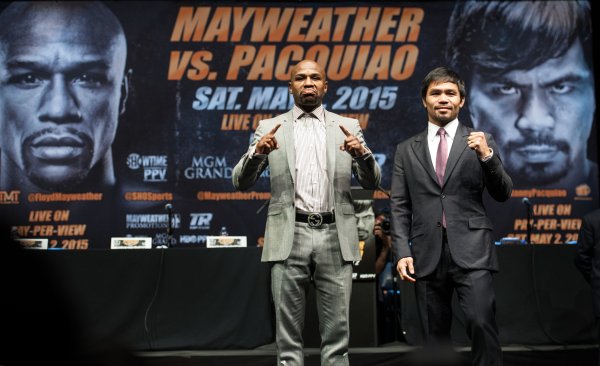 This Chart Shows the Crazy Money the Mayweather-Pacquiao Fight Will Make
Next Up: Editor's Pick