5 Days, 5,000 Miles, Fueled Only by the Sun: Solar Impulse Readies for Pacific Crossing

On Tuesday morning local time, a Swiss man named André Borschberg will take off from an airport in Nanjing, China, and fly for roughly 120 hours straight. He will travel east and south across the vast Pacific, spending days and nights over deep, dark sea as he hurtles toward Hawaii in an airplane powered by the sun.

An airplane powered by the sun? It’s the type of thing we dreamed about as children — running with our arms outstretched, circling like birds on the breeze. Kids love airplanes and astronauts — even airports, the bane of adults. Grown-ups tend to prefer our feet firmly planted. We’ve lost sight of the magic: a plane is a plane.

Borschberg and fellow pilot Bertrand Piccard want to restore our sense of wonder, which is why they’ve spent more than a decade preparing to fly their fuelless aircraft, Solar Impulse 2, around the globe. There will be 12 flights total, with the pilots taking turns at the helm of the single-seater. The goal of the trip, which started March 9 in the United Arab Emirates, is to inspire interest in clean tech.

“Adventure is where when you learn to be more open to the unknown,” says Piccard. “There is normal life, where we live automatically, we reproduce what we have learned, and [there are] moments of rupture and crisis. It is in these moments that you have to get rid of your certainties and habits.”

Once Solar Impulse leaves Nanjing, there will be few certainties. A flight like this has never been done.

The 5,000-mile leg will be a technical and physical test. Priority No. 1 is marshaling the sun, Borschberg says. During the day, Solar Impulse will fly high while capturing energy. When darkness falls, the engines will be cut and the plane will soar for several hours, losing altitude. At some point, the engine will start drawing on battery power. Then, at daybreak, the cycle begins again.

The flight will not be easy on the pilot. Seated in tiny cockpit, the 62-year-old will be awake for most of the flight, resting only for 20 minutes at a time. The conditions in the plane will be far from first-class comfort: the space is small, and the temperature and air pressure will vary dramatically through the trip. At some points, he will be able to communicate with mission control in Monaco. If things go wrong, he could be on his own.

For Borschberg, this is the flight of a lifetime. He started flying at 15, studied engineering, and spent decades as a pilot in the Swiss Air Force reserves. He is detail-driven and aviation-obsessed, brought to life by talk of aerodynamics. “I feel at home up there, at ease,” he says. “You get access to something that human beings on earth can’t access.”

Flying a plane like Solar Impulse, which is incredibly light, means working with the elements, not racing through them — a change of mind-set for a fighter pilot. “The more extreme the airplane, the more you have to have nature on your side and not the other way around,” Borschberg says. “You can look at the wind as a problem — turbulence, downdraft — or you can ask, how can I make it my ally? How can I integrate with nature instead of fearing it or trying to change it?”

His partner, Piccard, is the dreamer. Also born in Switzerland, the 57-year-old spent part of his childhood living in Florida during the U.S.-Soviet race to the moon. “The entire country was living for the conquest of the moon, and I had the chance to witness the most extraordinary human adventure,” he says. “When this was finished I had the impression that there was nothing else.”

Perhaps to prove himself wrong, he took up hang gliding and ballooning. He also studied psychiatry and hypnosis, fascinated, he said, by how being pushed to the limit could affect the mind. He went on to become, with Brian Jones, the first to complete a nonstop balloon flight around the world. He met Borschberg about 12 years ago and they have been planning, and fundraising, ever since.

Now they face the most difficult and dangerous part of the journey. Both pilots have trained hard for this — even dropping into water, blindfolded and strapped into parachutes, to simulate one possible worst case. They admit to nerves but prefer to talk about planning, preparation and the professionalism of the team that will guide them from Monaco.

Besides, they say, flight is about facing fear — taking a leap. When Borschberg sets out over the ocean, he will be sitting in a cockpit adorned with photographs of his family — a midair reminder of all that awaits him when he, and Solar Impulse, return to ground. 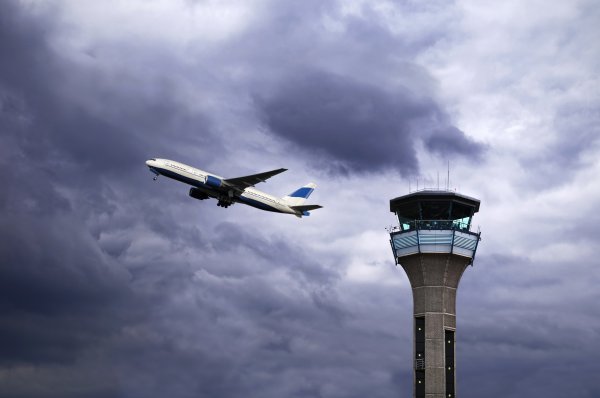 This Is Who Decides If Your Flight Takes Off This Memorial Day Weekend
Next Up: Editor's Pick