Last July, Magnum photographer Jerome Sessini was in eastern Ukraine when he heard that a plane had been brought down by a surface-to-air missile.

The French photographer was one of the first journalists on the scene. His heart-wrenching images showed how a field of sunflowers in the village of Torez had been transformed into the horrific resting place for 298 passengers.

For his coverage of the macabre landscape, published in TIME, the Overseas Press Club of America has awarded Sessini the Olivier Rebbot Award.

“I am pleasantly surprised,” the photographer told TIME ahead of today’s ceremony in New York. “I’m pleased for two reasons: one, because it’s a prestigious award and, two, because Gilles Peress is one of the former recipients of that prize, and he’s always been a model for me. He’s covered conflicts with a real analytical depth, which makes all the difference.”

Sessini spent most of 2014 in Ukraine, documenting the violent protests on Maidan Square in Kiev, the MH-17 plane crash, the unrecognized rebel-led referendum in Donetsk and the impact of war on local populations in eastern Ukraine.

“My process sounds a bit contradictory,” he said. “I start by covering a breaking news event and at some point, something happens in me and I have to cover that story in the long term. The two are indissociable. I need the urgency before I can change rhythm and take the necessary distance to the subject to produce a deeper body of work.”

Sessini was particularly attracted to the story in Ukraine because it visually stimulated him while holding a historical importance. “I’ll admit it, it was a mix of egoism and altruism,” he says. “The reason I decided to do long-term work in eastern Ukraine is because I felt the local population was the biggest loser of this war. They find themselves in the middle. They’ve been ostracized by the central government of Ukraine, and they are seen as the bad guys because Russia supports them.”

Sessini will be going back to eastern Ukraine in May.

The Overseas Press Club of America has also awarded photographers Bulent Kilic of Agence France-Presse and Rodrigo Abd of Associated Press with the John Faber Award and the Feature Photograph Award, respectively.

Kilic was named TIME’s 2014 Wire Photographer of the Year. 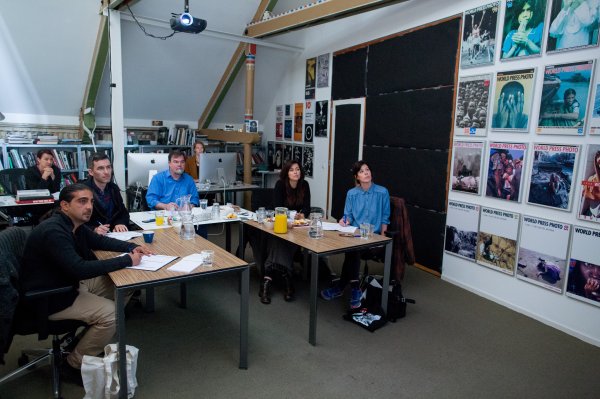