Japanese Prime Minister Shinzo Abe speaks to a joint meeting of the US Congress while flanked by Vice President Joseph Biden (L) and House Speaker John Boehner (R-OH) (R) in the House chamber of the US Capitol on April 29, 2015 in Washington.
Mark Wilson—Getty Images
By Alex Rogers

For the first time in history, a Japanese Prime Minister addressed a joint session of Congress Wednesday. And 70 years after the end of World War II, Japanese Prime Minister Shinzo Abe avoided an explicit apology for the war’s worst tragedies, focusing instead on the turnaround between the two countries and their efforts to strengthen their military and economic ties.

“The peace and security of the post-war world was not possible without American leadership,” said Abe. “That’s the path for Japan to ally itself with the U.S., and to go forward as a member of the Western world.”

“We support the ‘rebalancing’ by the U.S. in order to enhance the peace and security of the Asia-Pacific region,” he said. “We will support the U.S. effort first, last, and throughout.”

Abe stuck closely to his script and spent much of the speech, titled “Toward an Alliance of Hope,” looking forward. As Congress prepares to debate the Trans-Pacific Partnership, a major trade deal that would affect 12 countries and 40% of the world’s GDP, Abe called for a “successful conclusion” to the multi-party negotiations. “We must take the lead to build a market that is fair, dynamic, sustainable, and is also free from the arbitrary intentions of any nation,” he said. “Long-term, its strategic value is awesome. We should never forget that.”

Abe said the U.S. and Japan would strike a historic deal this summer further uniting the military cooperation between the U.S. and Japan. And he underscored what he said was a peaceful strategy to resolve a simmering fight over disputed territories with China in the South China Sea.

On the darkest time in U.S-Japan relations, WWII, Abe expressed sorrow for Japanese actions. His sentiments received a standing ovation, despite the feeling among some members, including Japanese-American Rep. Mike Honda, that Japan should issue an unequivocal apology for Japan’s subjugation of “comfort women” during the war. Abe said he visited the WWII memorial before the speech and “gasped” after learning that the thousands of gold stars there each represent the lives of 100 fallen soldiers. An American soldier who landed in Iwo Jima sat next to a member of Abe’s cabinet, whose grandfather fought in that bloody battle.

“History is harsh,” said Abe. “What is done cannot be undone. With deep repentance in my heart, I stood there in silent prayers for some time…On behalf of Japan and the Japanese people, I offer with profound respect my eternal condolences to the souls of all American people that were lost during World War II.”

“Armed conflicts have always made women suffer the most,” he added. “In our age, we must realize the kind of world where finally women are free from human rights abuses.”

While a recent poll found that over 70% of Americans had never heard of Abe, his speech revealed a personal familiarity with their country, dropping references to filibusters, Gary Cooper and Abe Lincoln. He noted his time as a student in California eating Italian food and ended his speech quoting Carole King, who sung “a song that flew out and shook my heart.” Acknowledging U.S. aid after a devastating tsunami hit Japan in 2011, Abe said, “Yes, we’ve got a friend in you.” 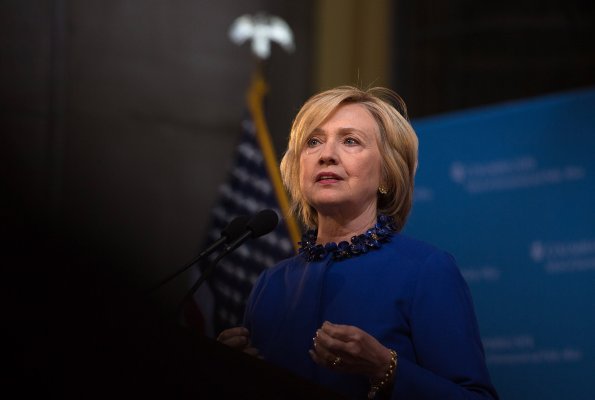 Hillary Clinton Calls for an End to 'Mass Incarceration'
Next Up: Editor's Pick