Like many if not most people, I have a favorite Avenger. Mine is the Vision. He’s not an A-list Avenger like Thor or Captain America, but he has a ridiculous number of superpowers: he’s superstrong, he can fly, he can walk through walls and shoot beams out of a gem on his forehead. Also, he’s married to the Scarlet Witch.

The Vision is never going to hold down his own solo movie—probably because he’s weird-looking and an android—but he does make an appearance in Avengers: Age of Ultron, the sequel to Marvel’s vast, Olympian, franchise-melding The Avengers, which made more money than any other film in history except Titanic and Avatar. You can see why: there’s something decadent and supersaturated about these movies, like you almost can’t believe the munificence of a Hollywood that would put Iron Man and the Hulk (and the Vision) in the same movie.

Like the first one, Avengers: Age of Ultron was written and directed by Joss Whedon, among whose many virtues is an indelible, infallible touch with character, which is important because in Ultron he has to introduce them at a furious rate. In addition to the six regular Avengers—and irregulars like Nick Fury, War Machine and the Falcon—we get not only the Vision but also the sorcerous Scarlet Witch and her twin brother Quicksilver, who has superspeed. Or as one character describes them, “He’s fast, she’s weird.”

Then there’s Ultron himself, a super-intelligent, borderline indestructible robot created with good intentions that have gone awry—he’s now trying to wipe out humanity. Physically Ultron looks like an animate, damascened suit of armor; having no nose, he also bears a family resemblance to Voldemort. As voiced by James Spader, Ultron displays a finely honed, mordant sense of humor. Responding to a noble, idealistic speech, he begins, “I can’t physically throw up in my mouth …”

If anything, Whedon’s writing is almost too sharp. The characters are so finely drawn and verbally quick (they name-check Banksy and Eugene O’Neill) that they seem to belong to a different universe than the cartoonish one they find themselves in. They’re smarter than it, but in order for the plot to get rolling, Tony Stark has to make the rookie mistake of trying to create a superpowered artificial intelligence using a gem embedded in the staff of Loki, god of evil. You can see Stark actively struggling to convince even himself that this is a good idea. Likewise, no one ever seems quite sure why the nonsuperpowered, merely handy Avengers, Black Widow and Hawkeye, are in the group at all, since they’re constantly in danger of being squashed like bugs.

With Ultron, Whedon has the opposite problem: he’s got too much power. Ultron represents a new trend, the cloud-based villain. While he has an impressive robotic hardware body, his essence is software, so he can spread anywhere on the Internet more or less instantly and copy himself at will. Pulverizing his body doesn’t do much good: he sheds bodies the way we shed old iPhones.

To give the Avengers even a fighting chance, Whedon has to keep Ultron in shackles, like a robotic Harrison Bergeron. He makes Ultron fond of small talk and sentimentally attached to the human form—we know what killer robots look like, and they don’t look like Ultron, they look like Predator drones. Ultron doesn’t back himself up conscientiously either. He’s not even fully wireless—-several times we see him tethered by what look like Ethernet cables. He pulls his punches: never mind trying to hack the world’s nuclear arsenal, why doesn’t he hack the Avengers’ jet? Surely there are a couple of zero-day flaws in the firmware. Or never mind that—he ought to hack Iron Man’s suit.

A real Ultron would be completely distributed and systemic, the way real-life supervillains are: climate change, Ebola, political inertia, economic inequality. You couldn’t smash them with Thor’s hammer—or you could, but it wouldn’t do any good. That would be truly scary. But not nearly as fun to watch. 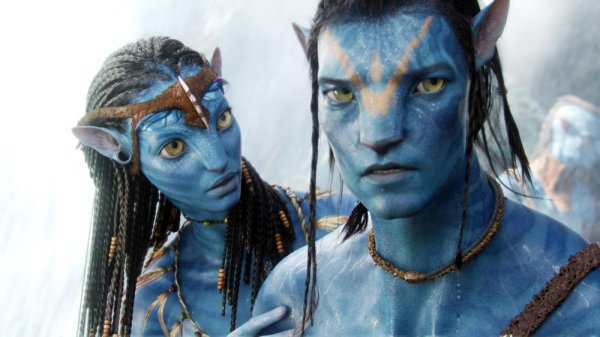 There May Be 4 Avatar Sequels on the Way
Next Up: Editor's Pick