The Strategy Behind Ariana Grande's Success

Ariana Grande keeps collecting hits from her sophomore album, My Everything, as “One Last Time” pushes to a new peak, No. 13, on the Billboard Hot 100 dated May 2. The song is the fifth single – and fifth smash – from the set, following “Problem” (featuring Iggy Azalea), which hit No. 2 last June; “Break Free” (featuring Zedd) (No. 4, August); “Bang Bang,” with Jessie J and Nicki Minaj (No. 3, October); and “Love Me Harder,” with The Weeknd (No. 7, November).

If it sounds like “Time,” with its easy hook and mass-appeal dance/pop vibe, is strong enough to be a lead single from an album, Republic Records executive VP Charlie Walk says that the label strongly considered it as the first offering from My Everything. But, the sassy “Problem” – released a year ago today – was a “disruptor,” as Walk calls it, best “setting the tone for the project.”

From there, Republic continued to strategically sequence the set’s singles. “‘Break Free’ felt like summer,” Walk says, while “Bang Bang” helped usher in Jessie J’s album Sweet Talker. Then, “Fall/winter felt like the best time for ‘Love Me Harder,’ since it’s a heavier, darker record.”

(And, while not a radio single, another song from My Everything, ballad “Just a Little Bit of Your Heart,” gained widespread exposure when Grande sang it on the Grammy Awards on Feb. 8. The performance further “showed her diversity,” Walk says.)

Of course, a label’s promotional efforts are only as strong as the music itself. With Grande, that’s, well, one less problem to worry about. “You trust in an artist’s ability to carry a song,” Walk adds. “We trust Ariana implicitly and she made these songs what they are today.

“She breathes life into songs and makes them matter.”

The calculated mapping out of when songs might sound best on the radio (and other platforms) isn’t exclusive to My Everything. Capitol Records, for instance, considered the seasons when planning singles from Katy Perry’s 2013 album PRISM. After lead single “Roar” ruled the Hot 100 that fall, the label issued ballad “Unconditionally” (a Perry favorite) to synch with winter, similar to Republic’s mindset regarding “Love Me Harder.” Likewise, Perry’s uptempo “Birthday” and “This Is How We Do,” the fourth and fifth singles from PRISM, were targeted for summer partying, a la Grande’s “Break Free.”

Ultimately, “One Last Time” has joined the pantheon of hit fifth singles from enduring albums. Perhaps the two most notable? Michael Jackson’s “Dirty Diana,” from 1987’s Bad, and Perry’s “Last Friday Night (T.G.I.F.),” from 2010’s Teenage Dream. Each song became the fifth Hot 100 No. 1 from the respective sets, marking the only albums ever to yield a quintet of leaders.

For Grande, the five smashes from her second album have helped My Everything sell 617,000 copies in the United States since its September release, according to Nielsen Music.

As Walk advises, “The way you get five hits is to have five strong songs that could all be first singles.” 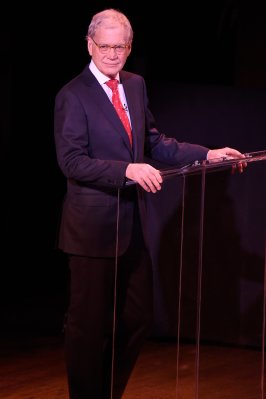 David Letterman Had No Say in Late Show Replacement
Next Up: Editor's Pick