Climber: Life Is Tough on the Top of the World

Alex Gavan is a high-altitude climber and environmental activist who was on Everest when the Nepal earthquake caused an avalanche on April 25.

It’s early morning on the top of the world. I’m here to climb Everest’s neighbor, Mount Lhotse, which shares Everest’s southern-side base camp and most of the ascent route until about 7,600 meters (almost 25,000 feet) in altitude. If everything goes as planned, this will be my seventh 8,000-meter summit climbed without using supplementary oxygen and high altitude porters. It’s a somehow relaxed atmosphere: I’m between two acclimatization climbs and having a rest, reading in my base camp tent.

Suddenly everything starts moving: an earthquake. I keep calm and wait for it to pass. The moment seems like an eternity—a huge, shaking, moving, unstable, noisy eternity. I’m expecting the whole glacier to crack and embrace me into its depths. And then, silence.

I jump up and open my tent, and I see a white wall of snow coming directly toward me from the Pumori Mountain. It is so large and so high that I cannot really grasp its magnitude. I run in the direction of the mess tent, where there is a large boulder where I can find shelter. I realize that the snow that is about to hit me doesn’t have the composition, color or compactness of the main avalanche. It is the powder end of the avalanche.

The main risk now is to get suffocated, having my airways filled with millions of ice particles. I decide to get into the mess tent to keep my mouth and nose free of snow. Then everything comes to a still. I’m alive.

I go out, look around and see the people in my camp are safe. Thinking where the avalanche came from and where it stopped, many others could now be under snow. I then go to my tent. Having left the fly open, it is now filled up with snow. I need to prioritize. I start cleaning up the tent and make myself ready for the search and rescue. Medicine, climbing gear, headlamp, all that. But I feel this is taking me an eternity and I get frustrated. Time is crucial now. I shout to a climbing Sherpa, on the top of the moraine, who says that people are caught into the Khumbu Icefall.

The weather is now bleak. The visibility is very low, and a heavy atmosphere lies over camp. I hear in the base camp that an incredibly high number of people have been caught in the avalanche, and there is urgent need of help. I want to go up onto the icefall to search, but conditions are too unstable for a safe ascent. I expect earthquake aftershocks and other avalanches. I assess this with two Polish climbers, and we decide that going up now is not an option. We shall start searching for people under the debris in the base camp, so we begin moving down the glacier towards that area.

Soon, we approach people trying to improvise a stretcher for a man who is almost unconscious on a mattress. He is already on oxygen. His face is badly damaged and cannot move. Next to him, a man is wrapped in a canvas. At my insistence, I am assured that he was dead, so nothing can be done for him. There are so many who need caring for at the partially destroyed medical tent, that we decide to take him to the camp of an important commercial expedition, which is unaffected by the avalanche and is reorganized to accommodate wounded people. Carrying a broken man smoothly over heavily glaciated terrain is a hugely strenuous task. It takes around 10 people, with many rest stops. One thing that strikes me is the large number of people looking and taking pictures instead of giving a hand.

At the new improvised medical point, three doctors are doing their best given the conditions and the equipment. I call one of the helicopter owners in Nepal and request assistance immediately, weather permitting.

Then I go back for more search and rescue, give medical assistance to two Chinese climbers and a Sherpa. When we return to the original medical point, we found only one wounded man—the others had been moved. He is so badly hit that a part of his skull is gone. I am repeatedly told that the man is not going to survive. But the man is still breathing, so we take him to the improvised medical facility. Later that night, he dies. I knew this was likely to happen, but I couldn’t accept it.

We return to our camp, have dinner and then I go back to the medical point. Along with two doctors, we give care overnight for the critically injured people. I was providing assistance particularly to a Japanese man. It wasn’t thought he would survive the night, but in the end we got him sent away alive.

At dawn, clouds are starting to gather. Two of the injured died overnight and others would die if no more helicopters come. We call for them again. I am tense until I hear a distant engine sound: two helicopters emerge. They did countless flights evacuating over 50 wounded people from the base camp. For the next three days, they fly off about 150 stranded climbers from Camp 1 and Camp 2 in the Western Cwm. At least 19 people died.

Like in many previous spring climbing seasons, there were scores of people on Everest, over 90% using supplementary oxygen and too many with dubious mountaineering experience. Everest should not be the place to learn climbing basics, as it happens now, with the overwhelming number of commercial expeditions.

Safety in numbers has never been more deceptive. It seems we understood nothing of the past disasters on Everest. Mountains should be places of elevation of one’s soul, not of one’s ego. I feel that we are making these mountains angrier and angrier. One must first achieve merit to be allowed into the abode of Gods. Merit is never achieved through cutting corners and cheating the way up to the top.

At the time I write, there are still people wanting to resume their climb on Everest. Up there, the air is thin and the mind unclear. Mountains are to be climbed not only with ice axes and crampons, which can all of us have, but more than anything with humbleness. Life and decisions are tough on the top of the world. 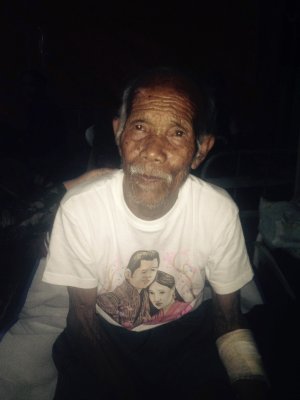 101-Year-Old Nepalese Man Found Alive in Rubble a Week After Quake
Next Up: Editor's Pick