The Twitter logo is displayed on a mobile device.
Bethany Clarke—Getty Images
By Daniel Roberts / Fortune

As far as leaks go, this was an ironic one. Yesterday, a data firm got hold of Twitter’s first-quarter earnings report about an hour before its official release, and the bad news about Twitter, the company, leaked—on Twitter, the platform.

But by the end of the day, the early release was the least of Twitter’s problems. The company’s quarterly revenue of $436 million represented 74% growth over last year, but was significantly lower than the $457 million expected by analysts, and below Twitter’s own guidance of a $440 to $450 million range. Twitter has now lowered its guidance for 2015 annual revenue from $2.3 billion down to the range of $2.170 — $2.2 billion.

The bad news naturally led to a stock slip on Tuesday — actually, more like a crash. Twitter’s share price dropped from $48.73, at 3:26 p.m., down to $40.31 only 20 minutes later. It closed the day back up just a touch, at $42.27. In the process, Twitter’s cofounders lost a great deal of their wealth, at least on paper. Ev Williams, who owns some 7.5% of the company, lost nearly $525 million, according to Bloomberg. Jack Dorsey, whose stake is just under 5% and who now runs the company Square, lost some $220 million.

In a conversation with Bloomberg, Williams said he is still bullish on the company’s stock (Williams now runs the blogging platform Medium, which he cofounded with Biz Stone):

“I have the utmost faith in the long-term business of Twitter,” he said. “It’s easy to get caught up in the ups and downs of the stock market, but the team and the business they’re building right now, I’m very optimistic and feel good about.”

To be sure, it’s not all bad news at the blue bird. Twitter’s live-video app Periscope has appeared to make gains over rival and South By Southwest hit Meerkat, and this month Twitter acquired TellApart, an ad-tech company that allows retailers to targets shoppers with ads on their phones. 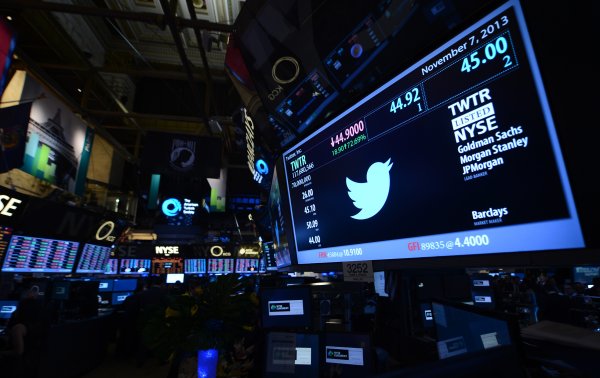 This Tweet Just Made Twitter's Stock Crash Hard
Next Up: Editor's Pick