This Woman Is Forecast to be the Biggest Winner of the U.K. Election

First Minister of Scotland and leader of the Scottish National Party Nicola Sturgeon campaigns in South Queensferry on the outskirts of Edinburgh on April 28, 2015.
Andy Buchanan—AFP/Getty Images
By Megan Gibson / Edinburgh

“Oh my god, it’s Nicola Sturgeon,” a twenty-something woman in a wool beanie cries, sounding genuinely star struck, as she spots the rising star of U.K. politics in the middle of a scrum of journalists, photographers and selfie seekers. The Scottish National Party (SNP) leader and Scottish First Minister is on the campaign trail, visiting a street in South Queensferry, a town on the western outskirts of Edinburgh, and stopped at a promenade with the spectacular Forth bridges in the distance. With just days to go before the U.K.’s general election on May 7, “Sturgeon-mania” — as the British press has branded the politician’s sudden spike in popularity — is in full swing.

Dressed smartly in a red suit and heels, Sturgeon stops to embrace voters, hold babies and snap selfies with the people crowding along the cobblestone street to meet her. Builders call out to her from nearby scaffolding and those working in the cafes and hair salons across the road line up along the street, craning their necks to catch a glimpse of her. Though she took the reins of her party less than eight months ago, Sturgeon has clearly achieved celebrity status in her home country.

“She’s more of a statesman than anyone else we’ve got,” says Sandy Thomson, a retired builder who lives down the road and came up to meet Sturgeon. He’s planning on voting SNP on May 7, after years of voting for either the Labour or Liberal Democrat parties. It’s a story repeated over and over by people in the crowd.

Sturgeon’s popularity is perhaps surprising, considering her party suffered a blow at the Scottish independence referendum last September when 55 percent of Scots voted to remain a part of the U.K. The outcome was heartbreaking for nearly half the country and saw the then-party leader and Scottish First Minister, Alex Salmond, resign, allowing his long-standing deputy, Sturgeon, to take command.

Since then, SNP membership has quadrupled to more than 100,000, making it the third largest party in the U.K. in terms of members. Nicola McEwen, professor of politics at the University of Edinburgh, says that the campaign for independence prior to the referendum “generated a nationalistic movement that didn’t exist before.” Sturgeon has smartly capitalized on that movement. Says McEwen, “there’s no doubt that her leadership of the party has strengthened its appeal.”

Polls suggest that the SNP — which won a paltry six of Scotland’s 59 seats in Westminster in 2010 — is on track to take as many as 50 come May 7. (Though, notably, Sturgeon won’t be one of the victors, as she’s not actually running for a seat at Westminster herself.)

Historically, Scotland has been Labour heartland. But the party — one of two major parties in the country, along with the Conservatives — has been struggling to keep Scottish voters for years. The SNP, with its pledges to stop the austerity measures put in place by the Conservative and Lib-Dem coalition government, now offers Scots a persuasive alternative. Though the SNP has released an election manifesto with strong similarities to Labour’s platform — both pledge to introduce a 50 percent income tax rate for top earners and a tax on high-value homes — Scots don’t seem to care. As Calley Morrison, a 24-year-old who works in a gift boutique in South Queensferry, puts it, “We have more faith in Nicola to push it through.”

READ NEXT: This New Yorker is Already Mayor of London But is he the Future Leader of the U.K.

If the SNP does manage to take the lion’s share of Scottish seats, it would very likely make the nationalist party the third largest in the U.K.’s parliament. With polls suggesting the likelihood of a hung parliament between the Conservative and Labour parties, that would put the SNP in the powerful position of influencing which party could actually form government — and who could be the U.K.’s next prime minister.

As the staunchly left-wing Sturgeon has pledged that SNP MPs would prevent a minority Conservative government from “even getting off the ground,” her potential kingmaker status has rattled Conservative Prime Minister David Cameron. The Tories have pushed the campaign message that if Labour’s Ed Miliband were to be the country’s next leader due to support from the SNP, he would be under the influence of a party that aims to break up the U.K. Campaign posters depicting a miniature Miliband sitting in the breast pocket of Sturgeon’s suit were released to drive that idea home.

READ NEXT: Meet the Most Controversial Man in the U.K. Elections

Miliband has publicly rejected any sort of agreement with SNP — though Sturgeon has said that Labour is likely to backtrack on May 8 and welcome SNP support if they fail to win a majority of seats. When asked at South Queensferry what her response to an apologetic phone call from Miliband after the election would be, she says amiably, “I don’t do smug.”

But such emphatic dismissals of the SNP haven’t endeared either of the major parties to Scots. Michelle Shepherd, 31, owns the Jitter Bean Café & Barista in South Queensferry with her mother, and is disgusted by the Conservative’s English-centric rhetoric. “I think they’re hypocritical,” she says. Before the referendum “they were saying how much they love [Scotland] and now they’re rejecting our representatives?”

The prospect of the SNP influencing Westminster might not even bother many voters in England, Wales or Northern Ireland. A Guardian/ICM poll found that only five percent of respondents had “fears of a smaller party holding the next government to ransom.” Rather, voters all over the U.K. seem to admire Sturgeon: during the televised leaders’ debates on April 2 — which saw Sturgeon capably take on not only Cameron and Miliband, but also three other party leaders — the sixth most Googled question, reported the Guardian, was “Can I vote for the SNP?”

As for the question of another referendum — which was previously spun as a “once-in-a-generation” event — Sturgeon has revealed little. She told BBC’s Newsnight on April 27, “Even if we won every seat in Scotland that would not be a mandate for another referendum.” While many of her opponents seem suspicious, McEwen says that, strategically, it wouldn’t be prudent of Sturgeon and the SNP to push for another referendum unless they were certain of a victory. “You can lose one referendum and gain from it, as they clearly have done,” she says. “Two? That’s a different matter.”

Even the residents of South Queensferry who voted for independence say they’re not especially keen to revisit the issue with another referendum. As one woman puts it, “it’s been done, we’ve made our peace.” Many say they’re just inspired by what Sturgeon has shown she can do for Scotland, by putting the country front and center in U.K. politics. As Calley Morrison, standing at the counter of the gift shop, says, “You gotta have faith in somebody.” 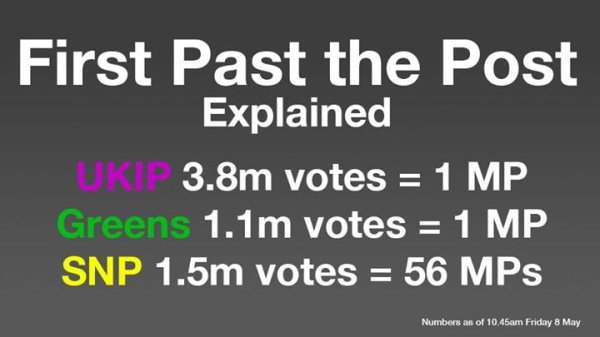 This Graphic Shows Why the U.K. Election is not Quite as Democratic as it Seems
Next Up: Editor's Pick