Hillary Clinton Calls for an End to 'Mass Incarceration'

Hillary Clinton called on Wednesday for broad criminal-justice reform and renewed trust between police officers and communities, reflecting the former first lady’s evolution from supporting the policies instituted by her husband two decades ago in a period of high crime rates.

Clinton called for body cameras in every police department in the country, as well as an end to an “era of mass incarceration.” Her speech came two days after the funeral in Baltimore of Freddie Gray, a 25-year-old black man who died while in police custody, and amidst ongoing civil unrest in that city.

“There is something profoundly wrong when African-American men are far more likely to be stopped by the police and charged with crimes and given longer prison terms than their white counterparts,” Clinton said. “There is something wrong when trust between law enforcement and the communities they serve breaks down … We must urgently begin to rebuild bonds of trust and respect among American between police and citizens.”

Clinton offered few specific policy plans in the speech, and didn’t explain how police forces would pay for body cameras on all officers. She spoke broadly about reducing jail sentences for low-level offenders and the effects of imprisoning millions, particular African Americans. “We don’t want to create another incarceration generation,” Clinton said.

Clinton planned Wednesday’s speech in November, months before she announced her candidacy, according to former New York mayor David Dinkins, who introduced her. In her three weeks as a presidential candidate, Clinton’s only major speeches have been at noncampaign events like today’s at Columbia University. Her comments were her most significant on domestic policing since she ended her tenure as Secretary of State in 2013.

The police shooting of Michael Brown in Ferguson, Mo., last year sparked a nationwide debate about body cameras for officers, and subsequent police killings of black men caught on camera in New York State, South Carolina and Ohio have fueled calls for reform.

Her remarks Wednesday reflected an evolution from the policing and incarceration policies that she supported in the 1990s, when as First Lady, she called for tougher prison sentences and “more prisons.” As President, Bill Clinton enacted a 1994 crime bill that built more prisons and increased the number of federal and death-penalty crimes, a bill that Hillary lobbied for in Congress.

Clinton’s campaign objected to an earlier version of this story that said the former First Lady “rejected” President Bill Clinton’s tough-on-crime stance of the 1990s, when crime rates were significantly higher than they are today. “1999 and 2015 are two very different times,” said a campaign aide. “Crimes rates have dropped by 50%. Different circumstances require different policy solutions.”

Hillary Clinton said Wednesday that federal money needed to be used to “bolster best practices” rather than equipping police with military equipment, and called for reducing the prison population. Her thinking reflects a broader evolution around the country, with politicians on both the left and the right backing ideas to reduce the prison population and change sentencing. Rand Paul, Chris Christie, the Koch brothers and many Democrats have also pushed for reform.

The views Clinton expressed Wednesday aren’t new. In her first presidential campaign, Clinton called it a “disgrace” that “so many more African Americans” were incarcerated than whites, and as early as 2000 decried policing practices that appeared to target African Americans and Latinos. “Let us start by recognizing that crime is down dramatically — and lives have been saved in this city — because every day, brave men and women put on a uniform and place themselves in harm’s way to protect us,” she said in 2000. “And let us also recognize that far too many people believe they are considered guilty simply because of the color of their skin.” 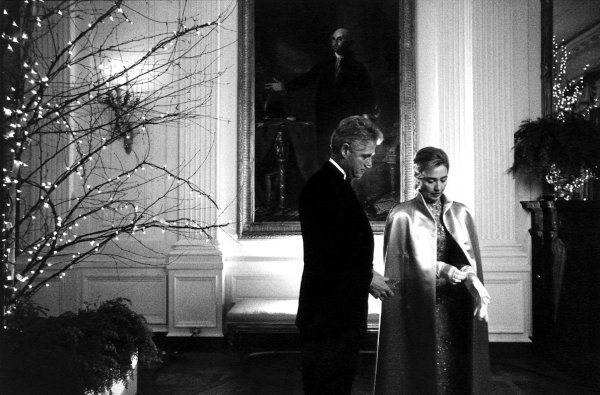