Nepalese villagers shelter from rain as an Indian Army helicopter delivers aid following an earthquake at Lapu in Gorkha on April 28, 2015. The impoverished country's leader said relief workers had still not reached many of the worst-hit areas.
SAJJAD HUSSAIN—AFP/Getty Images
By Adam McCauley / Kathmandu

At 11:56 a.m. on April 25, the moment the earth started to shake under his feet, Indra Bahadur Khatri was 90 minutes by foot from his sister’s home. There his youngest daughter, Priya, 6, was playing.

When the shaking finally stopped, a couple of minutes after it began, Indra said all the homes in his village of Tarkebesi, between 60 and 70 of them, had collapsed. That afternoon, still unsure of whether his daughter was safe, Indra helped his neighbors rescue one person, alive, from the day’s destruction. Then he started walking.

Saturday’s earthquake has so far claimed more than 5,000 lives. It devastated much of Sindhupalchok, the district home to both Indra and his sister. Arriving in Gore, his sister’s village, Indra found tragedy: his sister and two of her three children had been inside their house when it collapsed, killing the children and severely injuring his sister. Priya, his daughter, had been playing in the backyard. She avoided death but was caught by falling debris, fracturing her arm.

Indra was able to carry his injured daughter nearly two hours back to this village. He hurried after hearing rumors that relief helicopters were on their way. Once home, however, no helicopter arrived. The skies were empty on Sunday too.

This was not Sindhupalchok’s first disaster. In August 2014, mudslides claimed 156 lives as rescue crews scrambled to reach the area.

By Monday, Indra picked up his daughter again, her broken arm now at risk of infection, and walked another six hours to the Bazaar Melamchi, where an emergency helicopter would take them both to the hospital in Kathmandu.

I met Indra and Priya at Tribhuvan University Teaching Hospital, just minutes before her surgery on Tuesday night. The arm she broke days ago was now wrapped in orange bandage, a single white gauze strap immobilizing it against her small body. Tucked under a blanket, she lays on a metal hospital bed with no mattress, just a double-folded red comforter. At the foot of the bed rested her chart, four syringes and antibiotic pills.

Indra spoke at length about his frustration with failed relief efforts in his district. Although it was just two hours from Kathmandu, he had seen no aid workers, military or media.

According to hospital officials, the number of admitted patients was diminishing, from around 200 on Monday to approximately 80 as of Tuesday evening. Medical staff said nearly 80% of admitted cases involved fractured limbs, the remaining 20% admitted unconscious. Now, four days after the worst of the earthquake, the fear of infection rises in the untreated.

Read next: 6 More Ways You Can Give to Nepal Earthquake Relief 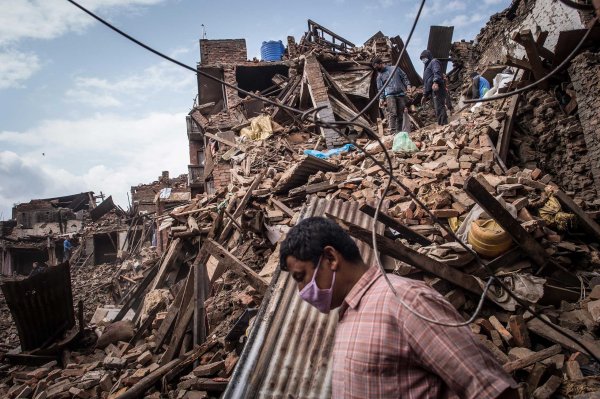