Nepalese victims of the earthquake search for their belongings among debris of their homes in Bhaktapur, Nepal, on April 29, 2015.
David Ramos—Getty Images
By Rishi Iyengar

Rishi Khanal spent about 80 hours in a rubble-filled room with three dead bodies after the seven-story building he was in collapsed around him during Saturday’s massive earthquake in downtown Kathmandu. The 28-year-old was finally pulled out of the rubble on Tuesday, Reuters reports, by a Nepali-French rescue team combing the capital city for survivors.

“It seems he survived by sheer willpower,” said Akhilesh Shreshtha, a doctor who treated him, after it appeared that Khanal had no access to food or water for three days and escaped with nothing but a possible broken leg.

Khanal’s rescue was a heartening but rare story from the devastation in Nepal, where a 7.8-magnitude earthquake over the weekend killed more than 5,000 people. That toll is sure to rise significantly as rescue teams move away from Kathmandu, which they began to do early Wednesday, and reach devastated villages near the quake’s epicenter.

Nepalese Prime Minister Sushil Koirala said the total number of lives lost could ultimately exceed 10,000. “The government is doing all it can for rescue and relief on a war footing,” Koirala told Reuters. “It is a challenge and a very difficult hour for Nepal.”

More than 450,000 people have reportedly been displaced from their homes. As international aid teams from countries like India, China, Pakistan, the U.S., Israel and several others arrive and commence operations, there is also growing concern about the spread of disease and lack of food and water in rural areas.

MORE: 6 More Ways You Can Give to Nepal Earthquake Relief

“The situation is much more worrying in those districts,” Samuel Marie-Fanon, the regional rapid-response coordinator for the European Commission’s humanitarian aid and civil protection department, told the Washington Post. “The big rains have started, and all this week people are sleeping in the open. There is an obvious need for shelter and tents or tarpaulins. The priorities are water, food and, of course, medical assistance.”

Periodic landslides and relentless rain continue to hamper rescue efforts in districts like Sindupalchowk, about 50 miles from Kathmandu and one of the worst-affected areas. Houses in the district have been completely destroyed, the Post reported, with nothing but heaps of rubble piled over bodies.

The Post also wrote about Ratna Kumari Shreshtha, an elderly woman brought to Kathmandu after being rescued from Sindupalchowk. She expressed the grief and helplessness sweeping the country.

Read next: International Aid to Nepal Ramps Up 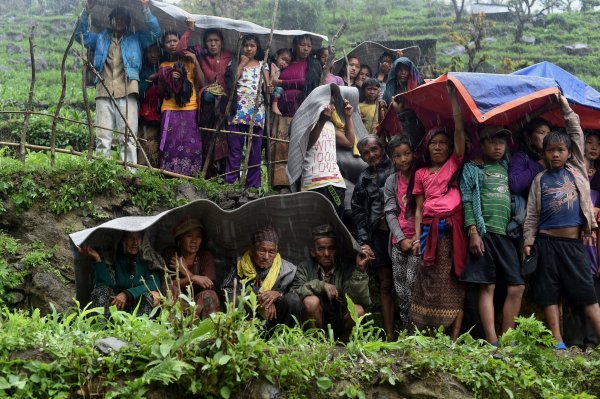 Aid Slow to Reach Nepalese Villages
Next Up: Editor's Pick