Activists clench their fists as they react after it was announced that the execution was delayed for death row prisoner Mary Jane Veloso, during a vigil outside Indonesian embassy in Makati, Philippines April 29, 2015.
Ezra Acayan—Reuters
By Helen Regan

To the delight of her family and supporters, Mary Jane Veloso, a 30-year-old Filipina who was due to be executed by firing squad in Indonesia for allegedly smuggling 2.6 kg of heroin into the country, was granted a reprieve at the 11th hour on Wednesday.

The President of the Philippines, Benigno Aquino, had made a last-minute request for her life to be spared. The execution was eventually called off after a woman Veloso had accused of planting the drugs on her in 2010, Maria Cristina Sergio, 47, surrendered to police in the Philippines on Tuesday, reports the Strait Times.

Indonesia brushed aside appeals from eight other foreign prisoners convicted of drug smuggling. The eight, including Australians Andrew Chan and Myran Sukumaran and Brazilian Rodrigo Gularte, were executed shortly after midnight.

As news of Veloso’s temporary reprieve was announced, a group of supporters holding a vigil outside the Indonesian embassy in Manila began cheering and waving flags.

On Wednesday, President Aquino thanked the Indonesian government for granting the stay.

“We would like to acknowledge their sense of fairness in assessing new information we provided and their understanding that Mary Jane Veloso is a person who went to their country in search of a better life, better opportunity, but was taken advantaged of by criminal syndicates,” Aquino’s spokesperson Herminio Coloma told the Straits Times.

Using the hashtag #MaryJaneLives, friends, celebrities and well-wishers took to Twitter to give thanks that Veloso had been spared.

Filipina TV host and model Bianca Gonzales tweeted that the death penalty “is never the answer.”

Actress Angel Locsin reminded those that while Veloso lived, eight others had died.

Filipino boxer and legislator Manny Pacquiao, who is currently in Las Vegas preparing for the much touted fight against Floyd Mayweather, had also called on Indonesian President Joko Widodo Monday to spare Veloso’s life. He tweeted a religious verse that appeared to relate to Veloso.

And as the hashtag started trending, other supporters expressed their relief.

Veloso has now been transferred from the island of Nusakambangan back to her former prison in Yogyakarta and is due to meet with her family and lawyers later on Wednesday. 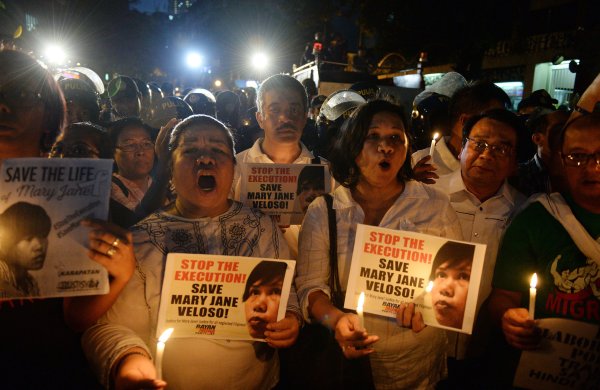