Former French first lady Valerie Trierweiler attends a gathering "Bring Back Our Girls" near the Eiffel Tower in Paris on April 14, 2015 to mark one year since more than 200 schoolgirls were kidnapped in Chibok, north-eastern Nigeria, by Nigerian Islamist rebel group Boko Haram.
Gonzalo Fuentes—Reuters
By Charlotte Alter

—The Nigerian army said that the hundreds of women and girls rescued from camps run by Islamist group Boko Haram Tuesday are not the same ones who were kidnapped from a Chibok school last April.

After Nigerian forces rescued 200 girls and 93 women from the Boko-Haram occupied Sambisa forest, many hoped missing Chibok schoolgirls whose abduction inspired the global campaign to ‘Bring Back Our Girls’ would be among them. The campaign’s founder, Obiageli Ezekwesili, said it was “heartbreaking” that the Chibok girls were not found, but added that any rescue is good news. “That these girls and women who were also captives of those savages (for God knows how long) can now breathe the air of freedom is certainly victory,” she told TIME. “We can seize on their rescue to add more pressure on our Government to spare no effort in finding our #ChibokGirls and all other abductees.”

Shortly after the rescue, an army spokesman announced that the rescued girls were other captives of Boko Haram, not the Chibok schoolgirls. Approximately 2,000 women and girls have been kidnapped by Boko Haram since the beginning of the year, according to Amnesty International.

According to testimony from escaped captives, girls and women abducted by Boko Haram are often raped, forced into marriage, or sold into sexual slavery. Sometimes they’re forced to become soldiers and attack their own villages. Some have despaired of finding the Chibok girls together, since Boko Haram leader Abubakar Shekau promised to “sell them on the market” shortly after they were abducted last year.

Ezekwesili gave a speech at last week’s TIME 100 gala urging the world not to forget the plight of the Chibok girls: 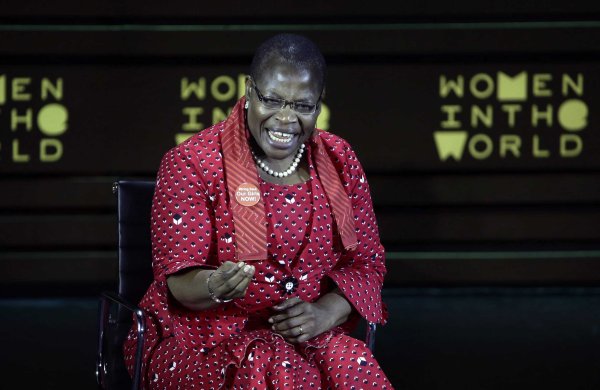 Inside the Search for the Chibok Schoolgirls Abducted by Boko Haram
Next Up: Editor's Pick