Racecar drivers say that the trick to managing speed at 200 miles per hour is to drive for daylight. They don’t focus on the lines on the pavement or their competition—they are going too fast. Instead, they focus on the horizon. Their hands follow their eyes.

Creative business minds do much the same thing. They navigate around immediate obstacles by keeping their long-term mission in view. They drive for daylight.
“You’ve got to look forward and drive forward,” Kevin Plank says about his company Under Armour. “You’ve got to dictate the tempo.”

Like each of the 200 leading entrepreneurs I interviewed for The Creator’s Code: The Six Essential Skills of Extraordinary Entrepreneurs, Plank executes in the moment with a laser-like focus on what lies ahead. These entrepreneurial professionals don’t benchmark themselves against the competition or evaluate success based on industry norms.

This kind of forward focus is distinctive. Psychologists at the University of Chicago conducted a study that shows that people who are committed to a goal have two ways of thinking. “To-go” thinkers like the entrepreneurs I studied are motivated by what remains to be done. “To-date” thinkers focus on how far they’ve already come.

Creators who turn small notions into big businesses fall into the latter category. They stay focused on the horizon, and the challenge ahead propels them forward.

Here’s how they do it—and how you can do it, too.

Like racecar drivers, creators also constantly scan the periphery. This allows them to detect new concepts as soon as they arise.

“Good entrepreneurs are always looking around the edges to see if there’s any signal out there that says an original assumption is aging, becoming obsolete, or losing its appeal,” says Gilman Louise, founder of the venture capital firm In-Q-Tel.

If senior executives in the car rental industry had been scanning the edges, they might have seen Robin Chase coming in 2001.

Chase saw that mobile technology could be used to challenge the conventional wisdom that you could only buy, lease, or rent a car. Why not share it? Sure, there was a negative connotation around sharing something as personal as a car. But we don’t consider hotels as bed sharing or gyms as treadmill sharing. Surely, then, the social obstacle could quickly fall away.

Chase was an early pioneer of the sharing economy that today includes companies such as Airbnb, Uber, and Rent the Runway. Her ability to identify a fringe idea and take it mainstream is available to all of us.

Racecar drivers can’t spend energy obsessing over their last race; likewise, my research revealed that creators avoid nostalgia. They don’t get caught up in “what could have been,” or “what might have happened.” They avoid what academics call counter-factual thinking. This means they quickly learn from mistakes, but they don’t fret over past failures or glorify past successes.

Don’t look back. Chipotle’s Steve Ells strives to make “the world’s best burrito” even better. He doesn’t allow managers to display awards for “Best Cheap Eats” or “Best Burrito” on the walls of Chipotle restaurants. “Yes, someone thought that we were best burrito, but that’s now irrelevant because we need to be better than that,” he said when we sat down at Chipotle’s New York City office. Those able to create and scale new ideas willingly abandon a legacy, even a powerful history that brought them to where they are today.

Focus on the Horizon

Elizabeth Holmes founded medical laboratory services company Theranos to fulfill her vision of beating disease by hastening its detection. The way we conduct blood tests has not fundamentally changed since the 1950s. A technician draws blood and then sends samples off to a lab; results arrive three to seven days later. By contrast, Holmes has designed a technology that uses DNA profiling and electronically sends physicians results within two to four hours.

This kind of speed can make a huge difference in the treatment of even relatively ordinary ailments. Imagine a patient waiting seven days after a blood test and then finding out she has anemia. She then undergoes another test and waits several more days to determine what kind of anemia it is. Returning to see the doctor a third time, she is told that the results show that she does not have anemia at all, but rather an iron deficiency. The problem is solved. But the entire process wasted a lot of time and money and caused needless suffering and worry.

Holmes cuts through all of these steps. It took Holmes 10 years of focused driving to advance her technology far enough to win a deal last year putting it into the giant Walgreens drugstore chain, and she still has her eyes fixed on the horizon. Think of the ramifications of extending Theranos’ speedy and readily available testing to the early detection and treatment of heart disease or cancer.

Focusing on a long-term mission makes it easier to navigate around immediate obstacles. For those who want to turn ideas into enterprises, don’t benchmark yourself against industry norms. To set the pace in a fast-moving global marketplace, focus always forward on shaping what comes next.

That’s how creators work. They seize the wheel, their eyes focused ahead, weaving around the potholes of naysayers and distractions. They have one objective: Success. And nothing gets in their way.

This post is in partnership with The Muse. This article was originally published on The Muse. 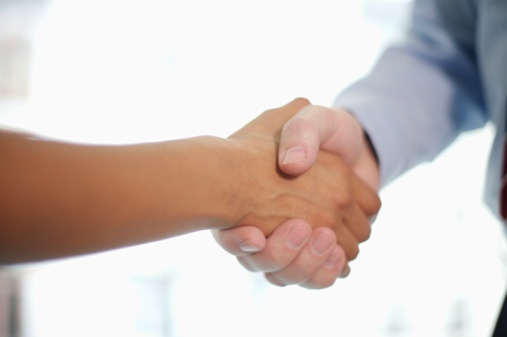 8 Habits of Successful Networkers
Next Up: Editor's Pick