When Jemima Kirke, an artist and star of HBO’s Girls, recently talked openly about her personal experience with abortion for the Center for Reproductive Rights, media took notice. Her story made it plain that, too often, women’s access to abortion and other reproductive health care is seriously limited due to their economic circumstances and because of the part of the country where they live. Jemima’s story was also a reminder that the ability to decide when or whether to have children is key to women’s opportunity to be financially secure and pursue their dreams. In recent years, spurred on by the reproductive justice movement, young people are refusing to be shamed or silenced about their personal decisions around abortion.

Celebrities, including Jemima Kirke and rapper Nicki Minaj, and elected officials such as Representative Lucy Flores have come forward on Facebook, Twitter and in the media to talk about their abortion experiences. Last fall, in Elle magazine, I did so myself. I had an abortion and it was the right decision for me.

In the current political environment and with so much shaming in popular culture, women get the message early and often that, while they may have the legal right to get an abortion, there’s still something wrong with that choice. We are seriously overdue to have a public dialogue about abortion, a need reflected by the fact that nearly one-third of American women will have one in their lifetime. However, women should share their own stories only if they choose to, and no woman should ever have to justify her personal medical decisions — about abortion or anything else.

Silence about abortion means that the void is filled with myths, stereotypes, and stigma.

For decades, there have been few honest portrayals about abortion in film and television. Fortunately, a new generation of television and film producers is writing and casting roles where abortion is a fact of life. Last summer’s Obvious Child and the upcoming Grandma deal with abortion in a refreshingly honest way. The crazily popular television shows Girls, Parenthood, The Fosters and Friday Night Lights depict women making the decision to have an abortion and finding support from their family and friends. The characters and the storylines reflect the reality of what we see at Planned Parenthood: that abortion is a reality of women’s lives, and it is most important that all women can get high-quality medical care, no matter what.

It’s time we talk openly about the caring and compassionate doctors and clinicians who provide abortion services. We also need to educate the public about how safe the procedure is, and about the consequences for women in need when more burdensome and unnecessary restrictions are passed by politicians. From 72-hour waiting periods to mandatory ultrasounds, there is real harm to women when legislators begin to take the place of doctors.

At Planned Parenthood, we believe that a woman’s decision about her pregnancy should be hers. We support the women who come to us, we make sure each woman has the information she needs to make a decision for herself, and we work hard to make sure she does not face political hurdles or financial hardship because of the decision she has made. We believe in providing nonjudgmental care no matter what, and that’s why one in five women in America has come to us for care at some point.

What I’ve found is that sometimes when you share your own story, other people find the courage and the comfort to share theirs. Women are increasingly feeling supported to share stories that have, in some cases, been kept silent for years. As a result, we’re having a different conversation about abortion today. Yes, it’s louder and bolder. But most importantly, it’s an authentic conversation with women at the center. 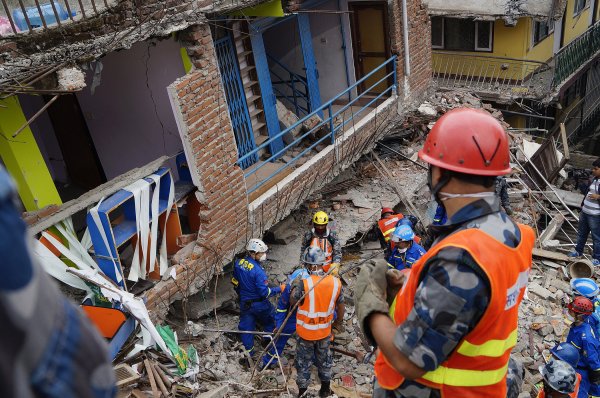 Nepal Is In Ruins, But It Will Overcome
Next Up: Editor's Pick