Why Nepal Wasn't Ready for the Earthquake

The shock of the past few days in Nepal gave way to despair, frustration and a few larger questions on Tuesday, as the death toll from the devastating earthquake that wracked the small Himalayan nation over the weekend rose above 4,000 — a number that will almost certainly rise once international rescue teams reach rubble-filled outlying areas surrounding the capital, Kathmandu.

The massive quake, measuring 7.8 on the Richter scale and followed by three days of panic-inducing aftershocks, has left the country — already one of the world’s poorest and least developed — reeling and utterly helpless.

But while the earthquake is tragic, seismologists said it didn’t come as a surprise. Nepal’s location on a fault line and a lack of emergency resources made a devastating earthquake inevitable, heightening a sense that more should have been done to make typically ramshackle local buildings more resilient, and so saving countless lives.

“It was no surprise whatsoever. This is the earthquake we’ve been waiting for,” Susan Hough, a seismologist at the U.S. Geological Survey, tells TIME. “People have been talking about a magnitude 8-ish earthquake hitting Nepal pretty much exactly like this one did. What surprises me is how many buildings are still standing.”

Nepal, nestled in the midst of the Himalayas and on a fault line between the Eurasian and South Asian tectonic plates, has long been on experts’ radar as a high-risk region that lacks the wherewithal to protect its 30 million people.

The country has a per capita GDP under $1,000, and homeowners often construct their own buildings without any oversight from trained engineers. Government officials imposed a new building code in 1994, six years after an earthquake there killed 700 people, but lack the resources, or will, to enforce it strictly. The government also attempted to implement a 1998 action plan formulated by disaster-management organizations GeoHazards International and the National Society for Earthquake Technology–Nepal, but was unable to adequately shore up its defenses.

“People have been trying for a long time to improve preparedness and resilience, but they’re resource-strapped,” Hough said.

MORE 6 Ways You Can Give to Nepal Earthquake Relief

The rest of the world has jumped to Nepal’s aid in the quake’s aftermath, with a host of countries ranging from neighbors like India and China to distant nations like the U.S. and even Israel joining the landlocked Himalayan nation’s own people in providing relief-and-rescue assistance. However, the continuing efforts have enforced a bitter sense of how powerless the Nepali government is to care for its own people when faced with calamity.

“Our government is not strong enough to handle this,” said Kshitiz Nyaupane, a Kathmandu local in his mid-20s. “We must take care of it ourselves.”

A decade-long civil war sparked off by a Maoist rebellion ended in 2006 after claiming nearly 20,000 lives, and the monarchy that had ruled Nepal since the 1700s was abolished in favor of parliamentary democracy. Competing and highly divisive factions of Nepali politics have been unable to come to an agreement on a constitution since then, however, and issues like disaster preparedness have taken a backseat amid an impasse that has lasted nearly a decade.

“We have had no political stability, nine prime ministers in eight years, and we don’t have a constitution,” Nishchal N. Pandey, director of the Kathmandu-based Centre for South Asian Studies (CSAS), tells TIME. “The people are very, very frustrated” at Nepal’s political and economic paralysis that could well be exacerbated by this disaster, Pandey said.

“The government cannot look after everyone,” said Tika Regmi, executive director of local trekking company Adventure Mountain Explore Treks & Expedition. “It’s the public like us who has to be careful.”

Although all of Regmi’s tour groups bound for the base camp of Mount Everest have fortunately been accounted for, he said not a single member of the government, police or army had come to his village of Budhanilkantha (about 11 km from Kathmandu) as of Monday afternoon. “Some people don’t even have a tent, mattress, blankets or food,” he said. “I don’t know if the government is looking, they may come to us tomorrow or maybe not.” Regmi was unreachable on Tuesday.

Some believe the government’s efforts of the 1990s may have mitigated the extent of the devastation to some degree — experts had previously predicted that an 8.0-magnitude quake in Kathmandu could kill between 40,000 and 250,000 people, according to University of Colorado professor and South Asian earthquake expert Roger Bilham.

But Pandey says there are certain facts and figures that are inexcusable. “Can you imagine that the Nepal army has just one Mi-7 helicopter?” he says. “Just one, for a force of 90,000. This is a grave tragedy.”

The CSAS head hopes that the earthquake, as tragic as it is, will be the jolt Nepal’s political class needs to get its act together. A fully functioning government would go some way to ensure the next quake, which is surely coming, does not wreak such a hefty toll. “So many people have died, our history is completely gone, and if not now, then when will these politicians come together?”

Read next: Where Will the Next Big Earthquake Hit? 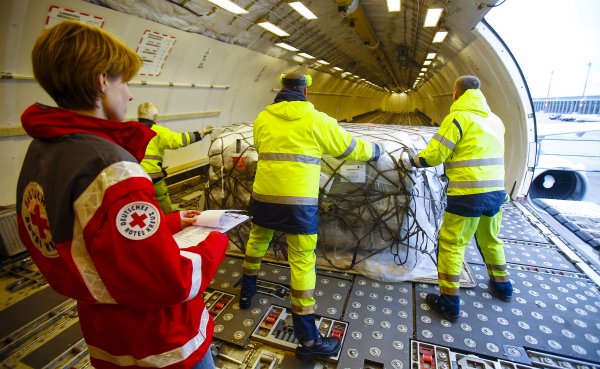 Global Aid to Nepal Ramps Up
Next Up: Editor's Pick