The Wire Creator Calls for End to Violence in Baltimore

A man walks past a burning police vehicle in Baltimore on April 27, 2015.
Patrick Semansky—AP
By Nolan Feeney

The creator of The Wire, the acclaimed HBO crime-drama that was set in Baltimore and aired from 2002-2008, called on Monday for an end to violence that erupted after funeral services for Freddie Gray, whose death following an injury in police custody has become the latest rallying cry for law enforcement reforms.

“The anger and the selfishness and the brutality of those claiming the right to violence in Freddie Gray’s name needs to cease,” David Simon, a former Baltimore Sun police reporter, wrote on his website, where he also engaged with commenters.

Read more: State of Emergency Is Declared in Baltimore After Violent Clashes

Maryland Governor Larry Hogan declared a state of emergency Monday after 15 police officers were injured following violent clashes with demonstrators described by police as “lawless.” The confrontations occurred in the hours after funeral services for Gray, who died April 19 following the arrest one week earlier.

“There was real power and potential in the peaceful protests that spoke in Mr. Gray’s name initially, and there was real unity at his homegoing today,” Simon continues. “But this, now, in the streets, is an affront to that man’s memory and a dimunition [SIC] of the absolute moral lesson that underlies his unnecessary death.” 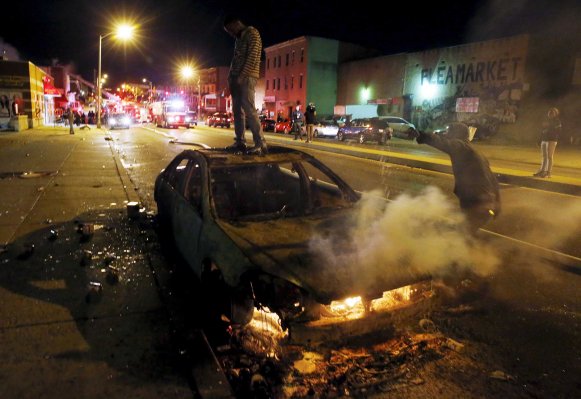