The name of the movie appeared nowhere on the cover of that week’s issue of TIME, but a banner of text proclaimed that, inside those pages was the story of the year’s best movie. The day was May 30, 1977, so you might be able to guess what that movie was: Star Wars. The article, complete with nearly a dozen photos from the movie, took readers through the vocabulary of the universe created by George Lucas and explained why such a strange-sounding picture would be worth seeing.

But, even though it’s been nearly four decades since Star Wars required such explanations, the 1977 story still contains some surprising nuggets of space knowledge. In honor of this year’s Star Wars Day — May the 4th — here are a few of them:

The movie only opened in about 50 theaters. As a point of comparison, The Phantom Menace opened in nearly 3,000 in 1999, according to Box Office Mojo.

Before the movie opened, there was a rash of theft at the production offices. As word of mouth ramped up, the world was desperate for Star Wars memorabilia and information. Thousands of color transparencies were stolen — the going rate for a black-market purchase was $5 a pop — and miniature models used to film spaceship scenes went missing as well.

The look of Tatooine’s landscape is thanks to George Lucas’ potential skin issues. Luke Skywalker’s home was meant to be a jungle, and producer Gary Kurtz even went to the Philippines to find a shooting location—except that “the bare thought of spending months shooting in the jungle made Lucas itchy.” The solution? The desert.

The casting company behind the Mos Eisley Cantina regulars was called Uglies, Ltd. “There [Lucas] found actors to portray thugs assembled from all parts of the galaxy,” TIME explained. ‘Then Makeup Man Stuart Freeborn went to work, making the uglies uglier…”

C-3PO’s eyes were made of real gold. Unsurprisingly, it was hot inside the costume for the droid referred to by TIME as “threepio.” The rubber and plastic that was used for joints approached its melting point, and it became dangerous for actor Anthony Daniels. But one part of the suit was not in danger of being destroyed: the eye pieces were covered with real gold, to prevent corrosion.

The actors weren’t exactly excited about the script. In an earlier draft of the script, the Jedi master Obi-Wan Kenobi started out as a crazy old geezer whose wisdom is revealed over time. Actor Alec Guinness told the filmmaker that it would be better for “his method of acting” if Kenobi was clearly wise the whole time; Lucas agreed to make the change. As for Mark Hamill, Harrison Ford and Carrie Fisher, they were excited about the project by the time the magazine article appeared, they weren’t afraid to admit that Lucas’ script was mouthful after mouthful. “There were times when I issued a threat to tie George up and make him repeat his own dialogue,” Ford told TIME. “I told him: ‘You can’t say that stuff. You can only type it.’ But I was wrong. It worked.”

Read the full 1977 story, here in the TIME Vault: The Year’s Best Movie 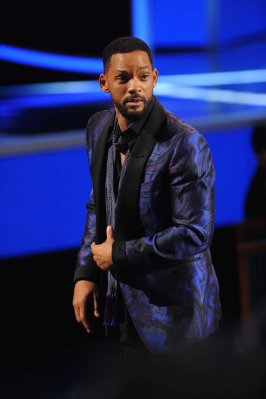 See Will Smith and Margot Robbie in Suicide Squad's First Cast Photo
Next Up: Editor's Pick