Can The Good Wife Fill the Kalinda Void?

This post contains spoilers for Sunday night’s episode of The Good Wife.

Everyone knew it was coming, but that didn’t make the blow any easier to bear: Kalinda Sharma—leather jacket enthusiast and investigator extraordinaire—exited The Good Wife last night, leaving Alicia (Julianna Margulies) doubled over in grief and audiences asking how the show can move on from losing its second major character in just two years.

The show creators announced the departure of Archie Panjabi, the Emmy-winning actress who played Kalinda, back in October, so all season long it’s just been a question of how she would go. A violent end, perhaps at the hands of drug kingpin Lemond Bishop, wasn’t out of the question. After all, Will Gardner (Josh Charles) was murdered in a shocking courtroom shooting last season.

But The Good Wife isn’t Game of Thrones. Two murders in two years would have probably shut down Diane and Cary’s practice for good. Instead, Kalinda’s farewell was quiet and dignified.

She had set a perfect plan to protect herself and Cary while still giving the state’s attorney evidence to prosecute Bishop. She stole a flash drive from Bishop’s number two, Dexter Roja, and used it to frame him. She would have gotten away with it too, if it weren’t for Cary trying to protect her and inadvertently tipping off Roja to what she had done. (You would think Cary would have learned by now that Kalinda doesn’t need his help.)

After realizing Cary’s mistake, Kalinda said her farewells to Cary (in person), Diane (over the phone) and Alicia (by note), before looking straight into the camera, saying goodbye and closing a door behind her. All that was left behind was a hole in the wall of her apartment where her secret stash of cash had been hidden.

Though losing a core cast member will be hard on the show, at least initially, it’s probably for the best. Showrunners Robert and Michelle King didn’t seem to know what to do with her anymore. In losing Will, Kalinda lost an equally cynical colleague and wonderful scene partner. Her friendship with Alicia—one of the few and best between two adult women on TV—had already suffered all the roller coaster turns imaginable after the revelations of Kalinda’s affair with Peter. Her relationship with Cary, too, had covered all possible ground (from “Will they? Won’t they?” to “Why did she just fake evidence for him?”).

And the writers said they were hesitant to delve further into Kalinda’s personal life. A season four plot twist involving her violent ex-husband was so unpopular that the creators cut it short. “You don’t give James Bond a girlfriend. Some characters you actually don’t want to see that much backstory,” creator Robert King told TV Guide at the time. Kalinda was left with little to do this season but babysit for Bishop’s son. No wonder Panjabi decided to leave.

So while the loss of Kalinda might have been a major problem earlier in the show, by season six, the move makes sense. And the creators proved after Will’s death that The Good Wife was capable of surviving—and even thriving—after the departure of a key character.

But they’ll need to compensate for her absence. Alicia will need another friend to confide in (whether that be Diane, with whom she recently made peace—or, more likely, love interest Finn). Cary will need a case or two to distract him from his guilt. And someone (perhaps a new character) will need to draw the camera outside of the courtroom and onto the streets of Chicago the way Kalinda did, elevating The Good Wife from a legal procedural to a prestige drama.

Farewell, Kalinda. You will be missed. 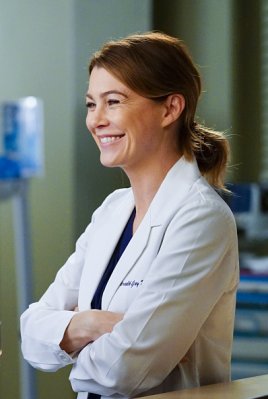 This Is What Ellen Pompeo Said About McDreamy's Death on Twitter
Next Up: Editor's Pick