Dancing With the Stars Watch: Top 7 Dance Through the Ages

Welcome back to Dancing With the Stars, where each week we are getting ever closer to sending someone home with a Mirror Ball Trophy to squish onto their mantelpiece. While this week was supposed to be topped off with a dramatic double elimination, Derek Hough ruined all our fun by getting injured during rehearsals, breaking his toe and spraining his ankle. Since Sasha Farber is stepping in for him on the dance floor this week, the producers didn’t think it would be fair to potentially cut them. Instead, one couple is leaving, and one couple will earn immunity from elimination.

Not content to just make the couples learn one routine, the producers force the remaining couples to compete in a dance-off to earn extra judges’ points in an effort to increase their overall score. At the end of the night, one couple will be sent home.

Here’s what happened on this week’s Dancing With the Stars:

Riker Lynch and Allison Holker: Before taking to the dance floor for a 1920s-themed quickstep, Riker just happened to mention that Len Goodman had not yet given out a 10 this season. He then delivered a high-speed routine tailor-made to appeal to Len. At the end of the dance, Len was pleased, but it was Bruno Tonioli who called Riker the “twinkletoes of the field of dreams,” which is probably Bruno’s highest PG-rated compliment. While the rest of the judges thought the routine was solid, but not outstanding, Len dutifully delivered his first 10 of the season. 37/40

Chris Soules and Witney Carson: At this point, even Chris is probably shocked to still be in the competition. Is this the furthest that a Bachelor has made it on Dancing With the Stars? After last week’s “breakthrough,” Chris is faced with the challenge of a 1940s foxtrot, where he is playing a sailor on shore leave. Chris continued his upward mobility, and the judges applauded his slow-steady progress, which was presumably inspired by the story of that man who drove to Iowa on a tractor. 31/40

Rumer Willis and Val Chmerkovskiy: Rumer’s dad, a.k.a. Bruce Willis, happened to stop by her rehearsal space and remind voters that he was in Die Hard and could easily ruin your next Christmas party if you don’t vote for his daughter. Well, he didn’t actually say that, but it was heavily implied. For their jive, they went to a hop in a hair salon in the 1950s. The judges liked the routine, but thought Rumer has lost some of her sparkle and want her to have it back. It seems like a case where she set the bar too high too early in the competition. 35/40

Noah Galloway and Sharna Burgess: Amy Purdy, a Dancing With the Stars runner-up and double below-the-knee amputee, stopped by Noah’s dressing room to give him a pep talk and remind him that all of this was doable. (Although Amy did admit that she was “lucky” because she still has her knees, which made dancing easier, which is just further proof of how incredible these two individuals are.) Sharna choreographed a solid 1970s-themed jazz routine complete with eyebrow-raising hip thrusts that had Carrie Ann Inaba on her feet with arms in the air, and Erin Andrews grinning wickedly throughout their postdance interview. 36/40

Robert Herjavec and Kym Johnson: Kym did not have an easy job choreographing a 1980s-themed Argentine tango, but she pulled it off a routine set to a weird, sultry, slowed down version of Cameo’s “Word Up.” Len said the duo was up and down like a game of Chutes and Ladders, and this week, they were up. Carrie Ann enjoyed the routine, but thought Robert still hadn’t mastered the timing and was distracted by Kym’s womanliness or something. 31/40

Nastia Liukin and Sasha Farber: While Derek was sidelined by his injuries, he still managed to insert himself into the dance by busting a move from the seat of the subway car they built on stage while Sasha did the heavy lifting. The routine was a “modern Charleston” set to Andy Grammer’s updated honkytonk song “Honey, I’m Good,” and as Julianne Hough said, they killed it. Carrie Ann came out to give Nastia a hug for her hard work, especially with a new partner. 38/40

Willow Shields and Mark Ballas: Once again, Mark has decided to choreograph for his inner child, choreographing this week’s “futuristic jazz” routine to MGMT’s “Electric Feel” dressed as ninja warriors. The number was dynamic and intricate, or in Bruno speak, it had a “mystic, hypnotic quality.” Carrie Ann gave her entire critique in Japanese, because she can, but probably said that the overarching lesson of this season is that Mark’s ideal partner is a 14-year-old girl. 37/40

Dance Off, Round One, Riker and Allison vs. Willow and Mark: Bruno said it was like trying to choose between “chocolate and vanilla” with their fast-paced salsa routines. While Twitter loved Riker, the judges loved Willow’s moves and they unanimously gave Willow and Mark the win and the extra points.

Dance Off, Round Two, Noah and Sharna vs. Robert and Kym: Both couples delivered solid, if not particularly inspiring cha-cha routines, and when they faced the judges, Tom Bergeron helpfully reminded everyone that if there is a tie, Len, as head judge, gets the deciding vote. Naturally that announcement was followed by a tie between the four judges. Len gave the round to Noah and Sharna.

Dance Off, Round Three, Chris and Witney vs. Rumer and Val: Both couples delivered smooth foxtrots, but despite Chris’ best efforts and breakthroughs, he was outclassed on the dance floor and knew it. No surprise when Rumer and Val won the face off unanimously and added two points to their already high score.

Who Went Home: When the hosts announced that both Robert and Chris were safe, it was clear that something was awry. Sure enough, despite consistently high scores, Willow was sent home. While she’s been very mature on the dance floor, she is only 14 years old and burst into tears at the news. Tom had no choice but to put aside his hosting duties long enough to give Willow a dad hug in her time of need. 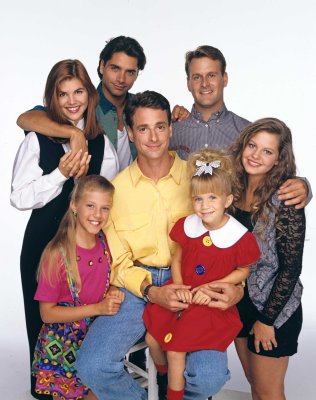 Lifetime Is Making an 'Unauthorized' Full House TV Movie
Next Up: Editor's Pick