China Rushes Aid to Nepal After Deadly Earthquake; Taiwan Is Turned Away

China this weekend rushed a 62-person team to Nepal to help with the ongoing search rescue operation after Saturday’s 7.9-magnitude earthquake. They landed in Kathmandu early Sunday and set to work immediately, according to Chinese state media. The rescuers and a second group from the People’s Liberation Army are both well-equipped to help in the desperate search for survivors of a disaster that has already claimed more than 3,600 lives: Some are veterans of the devastating 2008 Sichuan earthquake, which had a 70,000 death toll, and they bring much-needed supplies.

Not making the trip just yet: a team from Taiwan. Though dozens of Taiwanese were still missing in Nepal, and Taiwan has strong capabilities in disaster recovery and relief, the island was not asked to participate, Vice Foreign Minister Andrew Kao said Monday. (Taiwan NGOs and religious groups do plan to go and Taiwan people have already raised a large sum of money to support the recovery effort.)

It’s still uncertain whether Taiwan’s exclusion is an oversight or a (very poorly timed) slight. But it is clear that a mere two days after the quake, as Nepalis dig barehanded for their loved ones, and families sleep outside in the pouring rain, geopolitical questions loom large. Chief among them is how China’s involvement in the recovery effort could further change the balance of power in the region, challenging India and potentially putting Nepal’s Tibetan exile community at risk.

Tiny, landlocked Nepal is a foreign policy priority for China. Located at the edge of Tibet, the nation of 30 million is a buffer state between regional superpowers China and India. Though India has long seen Nepal as part of its sphere of influence, China has in recent years stepped up efforts to increase its role across Central and South Asia, an effort President Xi Jinping calls the “One Road, One Belt” initiative. (The China-India proxy fight is also playing out in Sri Lanka, as TIME’s Nikhil Kumar recently wrote.)

The “One Road” portion of the project will bolster China’s existing investment in infrastructure and trade. With better road links between Tibet Autonomous Region and Nepal, Beijing will be better placed to access markets in South Asia. China is now the largest player in terms of Foreign Direct Investment in Nepal, overtaking the previous claimant, India. All this, along with China’s massive investment in Pakistan, no doubt has New Delhi nervous.

Another sticking point: exiled Tibetans. Since the Dalai Lama fled to India in 1959, Nepal has traditionally been both a way-station and a refuge for Tibetans fleeing Chinese rule. But as China’s influence has grown, Nepal’s hospitality has waned. A U.S. embassy cable released by WikiLeaks in 2010 noted that “Beijing has asked Kathmandu to step up patrols,” and was providing “financial incentives” to those who apprehended would-be exiles.

Indeed, multiple reports suggest things are getting tougher for the estimated 20,000-strong exile community in Nepal. In April 2014, Human Rights Watch issued a 100-page report, Under China’s Shadow, documenting what they called, “a de facto ban on political protests, sharp restrictions on public activities promoting Tibetan culture and religion, and routine abuses by Nepali security forces.” (In a statement, Nepal’s Ministry of Foreign Affairs denounced the findings as “unnecessary meddling into the friendly relationships between the two close neighbors,” but did not rebut specific claims.)

If neighborly sentiment means more aid for those still waiting in the ruble, few will complain. But Nepal has reason to wonder if this assistance will also bring a push for greater control.

Read next: Where Will the Next Big Earthquake Hit? 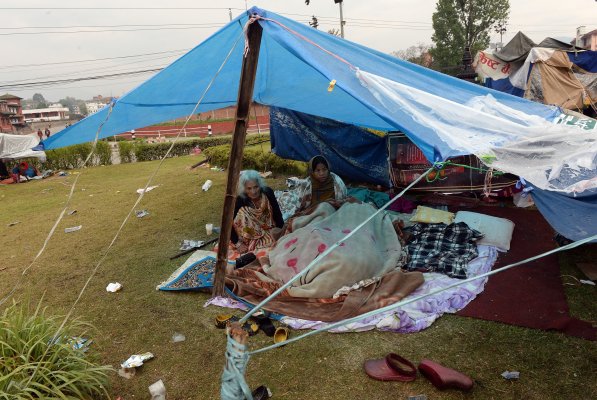 6 Ways you Can Give to Earthquake Relief
Next Up: Editor's Pick