Protestors encourage passing cars to honk while standing in the middle of York Road near Vaughn Greene Funeral Services during the wake of Freddie Gray in Baltimore on April 26, 2015.
Drew Angerer—Getty Images
By Josh Sanburn / Baltimore

To the west of Vaughn Greene Funeral Services, where a wake was held Sunday for the 25-year-old Baltimore man who died in police custody, is Loyola University and largely white and affluent surrounding neighborhoods. To the east are Winston-Govans and Richnor Springs and Kenilworth Park—all low-income, predominantly black neighborhoods.

On Sunday, Gray’s body was at a nexus of those two Baltimores. The funeral home is located on York Road, a north-south corridor that almost neatly divides those starkly different areas of the city. Gray, who was black, died in police custody on April 19 after he was arrested a week earlier near Gilmor Homes, a public housing complex. Gray ran from police after he “made eye contact” with officers and was eventually detained. Video taken by bystanders shows police dragging Gray into a police van. An autopsy later showed that Gray died from a severe spinal injury.

The incident has joined those in Ferguson, North Charleston, Cleveland and New York—all instances in which police use of force incidents against black men have been called into question. On Saturday, protests over Gray’s death briefly turned violent when Baltimore police arrested 35 protesters after businesses were vandalized and police vehicles damaged. Officials blame a small group of people from outside the city for the violence. Mayor Stephanie Rawlings-Blake said at least one of those arrested was from outside of Baltimore.

But on Sunday, Baltimore remained largely quiet aside from several dozen demonstrators lining York outside the funeral home where hundreds of family and friends paid their respects. Some stood in the street for hours holding cut-out cardboard signs that read “We Will Remember Freddie” in black marker while urging passing cars to honk in support.

Joseph Capista, a lecturer at Towson University who helped organize Sunday’s demonstration, said he hoped Gray’s death would be a tipping point for the city.

“We live in an antebellum society in terms of racial justice,” Capista said, adding that he believed police behavior differed depending on the neighborhood. Policing in white neighborhoods, he said, is often more respectful on the whole than in poorer black ones.

A number of protesters were concerned that Baltimore—nicknamed “Charm City”—was being treated unfairly in the media after the trouble on Saturday.

“Baltimore was not out of control,” said Karen DeCamp, a director at the Greater Homewood Community Corporation, a nonprofit advocacy organization, who was demonstrating outside the funeral home. “Baltimore was not burning. A very small number of people made some trouble, and it was completely blown out of proportion.”

While there was no violence Sunday, there was still anger. Patrices Kelly, 40, who lives in West Baltimore and was watching demonstrators Sunday, said she wanted both the mayor and Police Commissioner Anthony Batts to step down.

Kelly said she was “angry as hell,” and “frustrated” at city officials’ response. “We just want to do something about it.”

Several miles away, Baltimore’s mayor convened a press conference at the Bethel A.M.E. Baptist Church alongside about a dozen religious and community leaders. Rawlings-Blake said that a “small group of agitators” turned otherwise peaceful demonstrations violent on Saturday, calling their actions “unacceptable.”

“We cannot and will not let a minority of incendiary individuals exploit the honorable intentions of those trying to exercise their rights,” Rawlings-Blake said.

On Monday, Gray is set to be buried at the New Shiloh Baptist Church in the neighborhood of Mondawmin. The fault line of York Road will remain for now. 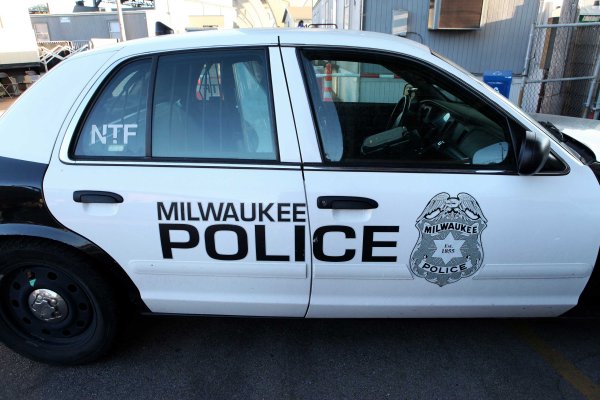 Milwaukee Police Chief Ed Flynn: Officers Are Depressed by the Current Climate
Next Up: Editor's Pick