An injured person is loaded onto a rescue helicopter at Everest Base Camp on April 26, 2015.
Roberto Schmidt—AFP/Getty Images
By Lindsay Kimble / People

American Marisa Eve Girawong has been confirmed as one of three Americans killed during the Nepal earthquake on Saturday. Girawong was climbing Mount Everest with Seattle-basedMadison Mountaineering group when the quake trigged an avalanche on the Earth’s highest mountain.

More than 2,300 people have been reported dead after the 7.9 magnitude earthquake, according to Reuters. There have been dozens of subsequent aftershocks trigged by the earthquake, including one Sunday morning near Mount Everest, reported CNN.

Girawong, who was 28, was serving as the Everest/Lhotse base camp doctor for Madison Mountaineering.

“Eve perished in the aftermath of the avalanche that struck the base camp area following the devastating Nepal earthquake earlier today,” Madison co-founder Kurt Hunter wrote on the company’s website on Saturday.

Girawong hailed from Edison, New Jersey, and previously worked at the East Orange General Hospital, according to the New York Daily News.

Girawong was actively documenting her journey on social media, posting on her Facebook just a few hours before passing. “Day 28 on this arduous journey, snow is falling & my food cravings are at an all time high … Is a crunchy spicy tuna roll with eel sauce too much to ask for?” she wrote.

According to her bio on the Madison Mountaineering website, Girawong completed medical training in 2012 at John Stroger Hospital of Chicago, graduating with honors for Master of Medical Sciences and Physician Assistant studies. She was in the process of completing a second Mater’s degree and postgraduate diploma in mountain medicine at the University of Leicester in the U.K.

Girawong was also an avid indoor and outdoor rock climber, and first became involved in expedition medical training in 2013, according to her bio.

At least 17 climbers were killed in the avalanche, with approximately 37 others injured, reported Reuters.

Google executive Dan Fredinburg was one of the other identified Americans killed in the avalanche, dying of a head injury on Saturday. 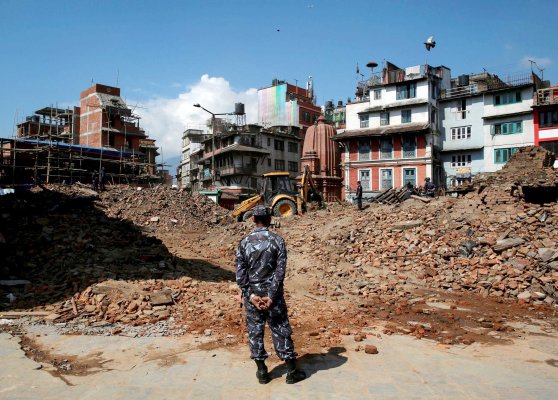 Kathmandu on Edge After Deadly Quake Ravages Nepal
Next Up: Editor's Pick