I gave a presentation to Womensphere a few months ago on the most valuable lessons I learned early in my career. Back when I was an entry-level investment banking analyst at Bear Stearns (R.I.P.), our trainers gave us some basic advice on how to be a good analyst. At the time these sounded obvious but now with hindsight, I think that most of your success in your career is just executing on these basic points.

If you follow the steps below, you’re well on your way to being a top quartile performer.

1. Listen and write down what you hear.

I was told to always carry a notebook (now a smartphone), because clients and your seniors will ask you to do tasks. If you write down those tasks and actually execute them, you become known as someone worth asking to carry out these undertakings.

In my role as a venture capitalist, when I meet a founder, I often will make suggestions of people for them to meet, competitors to analyze and ideas to pursue. I don’t necessarily expect them to follow on any particular suggestion, however, I do note if they are writing down my suggestions. If not, that indicates that they may not be the sort of person who’s diligent about listening to the market. Not good. Why take that risk?

2. Get your data organized.

Successful people are careful to retain and organize all of their notes: on meetings, people they meet and assignments for which they have responsibility, to name a few. Being extremely detail-oriented is generally a good professional characteristic.

For instance, one of my standard interview questions for salespeople is, “What CRM system do you use, and how many people are in it?” A bad answer is, “Excel and a few hundred.” A good answer is “Salesforce.com [or another real CRM system] and [a much larger number proportionate to your number of years of experience]”

Before you do any task, look for the instructions. For example, I’m amazed at how many funding pitches lack the basic information which investors require before funding — even though Google provides that information in seconds. If a founder doesn’t do some basic research before approaching investors, it’s a sign she can’t operate autonomously.

Lilin Wang, a graduate student at Cornell Tech, observes that others have already tackled 80 percent of technical problems she tries to solve. If you look for solutions on forums such as Stack Overflow before you do a task, you typically will save a lot of time. Similarly, Authorea (ffVC portfolio company) is working on being Github for academics, making the research process more efficient. Also, Quora is a particularly good resource for founders.

If you don’t understand the objective of a task at hand or believe someone else has already accomplished it, it is important to keep an open line of communication with your colleagues. On the flip side, if you envision a way to produce a better result or product, communicate that to your colleagues and ensure it is aligned with their intended goal. Either way, you are making sure you are not wasting your time and reinforcing a relationship with others.

The smartest person doesn’t necessarily get promoted. Rather, it’s the person who catches the inevitable mistakes and fixes them. It’s critical to double- and triple-check your work.

For instance, whether it’s a text for a tweet or a fundraising deck, Raffi Sapire, an analyst at Acumen, prints out and re-reads every piece of content before sending to her team. One of the marks of a good financial modeler is building checksums throughout her model; the analogous principle holds true for other tasks as well.

If you ask someone to do something, set up a reminder to make sure they actually executed it. When I meet people, I often ask them to email me a business plan, a competitive analysis, resume or other document. I have noticed only 20 percent of people whom I meet actually do that. Not good.

Alberto Pepe, CEO of Authorea, observed that many entrepreneurs, especially those coming straight from academia, don’t follow up, because they don’t want to be perceived as annoying or too pushy.

One way to think about this is to learn to be “professionally pushy.” In Getting Things Done, David Allen talks about the “Waiting For” list to keep track of follow ups you are waiting for from others. I track a lot of my “waiting fors” by starring certain emails in my sent messages.The people I work with know that I’ll follow up on my requests to them, which encourages them to revert to me sooner rather than later.

Early in your career, you typically advance based on a certain learned skill set. But very rapidly, your ability to work cooperatively with people inside and outside the firm becomes a big driver of your advance.

Bring one idea to the table each month that would help your company or team achieve its goals and objectives for the year. Thoroughly think through the steps you will take to execute on that goal, and who needs to be involved at certain points. Even if only two ideas receive positive feedback and a go-ahead, highlighting your ability and history of disrupting the status quo is helpful when promotion discussions come around. 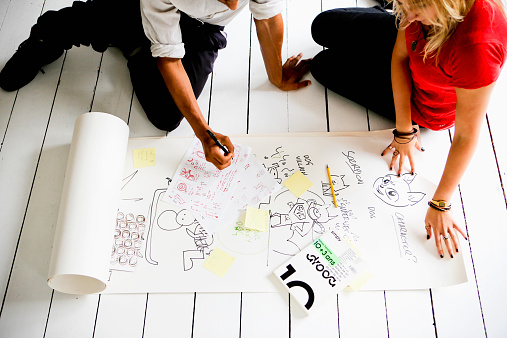 11 Ways to Maximize Your Creative Brainstorming Time
Next Up: Editor's Pick