Watch Angelina Jolie Call on the U.N. to Save Lives in Syria

Angelina Jolie called for immediate action to help people in Syria in an address to the U.N. Security Council on Friday.

“We are failing to save lives in Syria,” the actress and U.N. special envoy on refugee issues said in her briefing on the Syrian refugee crisis.

The U.N. estimates that about 3.8 million people have fled Syria and 7.6 million others have been displaced in the last four years. Some 220,000 Syrians have been killed since 2011. Jolie shared the stories of some of these survivors, including an 11-year-old girl in a Lebanon camp who is responsible for feeding her five orphaned siblings.

Meanwhile, others fleeing the conflict have drowned trying to reach Europe in overcrowded boats that sink. “It is sickening to see thousands of people drowning on the doorstep of the world’s wealthiest continent,” Jolie said. More than 1,300 refugees have died in the Mediterranean in the past three weeks.

Jolie pleaded with the council to “work as one and end the conflict” by first imposing sanctions and an arms embargo on Syria. Russia has vetoed such efforts in the past.

Later on Friday, at a Women of the World Summit event at the U.N., Jolie spoke specifically about the abuses of women in the conflict.

“Who among us would have thought we would see, in Iraq and Syria, images of women in cages, sold into sex slavery,” she said. She went on to assert that the U.N.’s efforts to protect women in war have fallen short. “Crimes against women are still treated as secondary issues,” she said.

Jolie served as a goodwill ambassador for the U.N.’s refugee agency before being promoted to special envoy in 2012. She has gone on 50 field missions to more than 30 countries, including Syria. 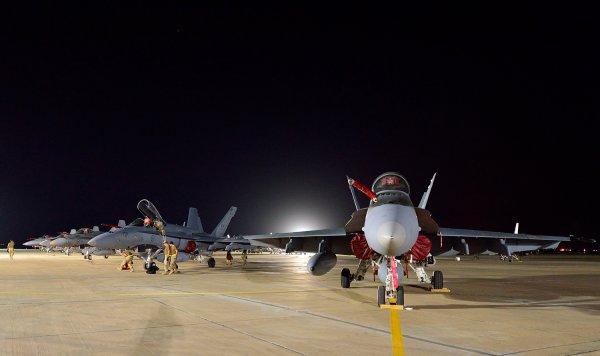 Canadian Jets Have Begun Bombing ISIS Targets in Syria
Next Up: Editor's Pick