I wanted to summarize his points and add a few thoughts of my own:

1) Even though we’re despised in some parts of the country and discriminated against in some ways, we don’t really get bullied or picked on. That makes it harder to gain sympathy for our views.

Krattenmaker is right (and I’m glad he is, because the alternative would be awful). We often make a lot of comparisons between our movement and the LGBT movement, and this is one area where that just falls apart. LGBT individuals have it much worse than we do on this front. (For that reason, I don’t buy the notion that the treatment of atheists is “America’s last prejudice.”)

That said, how do we make people more likely to trust us or consider us electable? Atheists who have the opportunity to do so need to talk more about their values and share stories about what they’re gone through. We have to find a way to get people who might disagree with us about God to be on our side in other ways. That doesn’t happen if we spend a lot of our time insulting them (publicly or otherwise).

2) We have a bad reputation.

We do. And what I said above still applies here. When you think about the most famous atheists — known to people beyond our community — the ones who immediately come to my mind are comedians (who mock religion) and authors (who criticize religion). All of that has it’s place, no doubt, but whenever possible, we need to promote and support voices who are tough to dislike. It’s tough to find Neil deGrasse Tyson-types who can reach out to multiple kinds of audiences without necessarily alienating them while talking about atheism (which Tyson doesn’t do). But the more people like that in the public eye, the tougher it is to pretend we’re all evil and immoral.

3) Too many people think God and morality go together.

That’s unfortunately true as well. Once again, this is a matter of stressing our Humanism: That not believing in God or an afterlife compels us to act certain ways right now. We have to fight for civil rights and against injustice because it’s not like these things will all get sorted out after we die.

Already, there have been advertising campaigns stressing how we’re “good without God,” though a catchy slogan is no match for tangible actions. That means more volunteering, more charity work, and being on the front lines on issues where religion gets it wrong.

4) We dismiss religious groups that might otherwise be natural allies on a host of church/state separation issues.

I’ve definitely experienced this, but that’s changing. That’s why Foundation Beyond Belief always includes an organization run by (non-proselytizing) religious groups in our slate of charities each quarter. That’s why the Secular Student Alliance has done more work recently with the Interfaith Youth Core. That’s why I’m a firm believer that achieving our common goals is more of a priority than debating who’s right, whether we’re supporting progressive churches for being LGBT inclusive or joining religious leaders in protests when we see racial inequality.

Krattenmaker is saying that most people still don’t know any open atheists, and that makes it a lot easier to demonize us. That’s why events like Openly Secular Day are so important, and why I just love to see people using new media to speak out about their non-belief. They’re using YouTube, Twitter, Facebook, and their campus groups to send messages to strangers who may not know what freethought looks like. This is such a huge change from a couple of decades ago, and it’s only going to get better on this front in the future.

To be sure, those aren’t the only challenges we face, but they’re pretty accurate from a broad public perspective. I’m an optimist about all of them. When you considering how much worse things were for us, on all five fronts, a few decades ago, it’s incredible how far we’ve come. The path ahead of us looks bright.

Hemant Mehta is the editor of Friendly Atheist, appears on the Atheist Voice channel on YouTube, and co-hosts the uniquely-named Friendly Atheist Podcast. He is a former National Board Certified high school math teacher in the suburbs of Chicago, where he taught for for seven years. Hemant has appeared on CNN and FOX News Channel (really). He currently serves on the board of directors for Foundation Beyond Belief (a charity organization targeting non-theistic donors) after spending several years as the chair of the board of the Secular Student Alliance (which creates and supports college atheist groups nationwide). He is the author of three books, including I Sold My Soul on eBay (WaterBrook Press, 2007) and The Young Atheist’s Survival Guide (Patheos Press, 2012). You can reach him at Mpromptu@gmail.com. 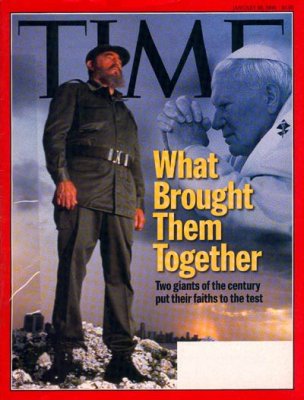 How the Vatican and Cuba Came Together
Next Up: Editor's Pick