On Thursday’s Lip Sync Battle, former NFL star Terry Crews faced off against heavyweight champion and face tattoo enthusiast Mike Tyson in a battle for the Internet ages — and they were both ready to rumble.

Crews delivered a particularly stirring rendition of Vanessa Carlton’s heartfelt anthem “A Thousand Miles,” which he originally debuted in the 2004 film, White Chicks. He started his performance seated at the piano, accompanying his lip syncing with some faux piano playing. Crews then kicked it up a notch, jumping on top of the piano, adding in some rhythmic gymnastics, and making the crowd swoon by ripping off his white blazer to pump his pecs in time with the beat.

While Crews tugged at the heartstrings, Tyson went for the knockout with a stellar performance of Salt-N-Pepa’s classic “Push It.” While Tyson’s lip syncing was lackluster in that he kept forgetting to do it, he earned points for his extreme dance moves in his extra tight pants.

The winner by decision? There’s a new champion: Crews. 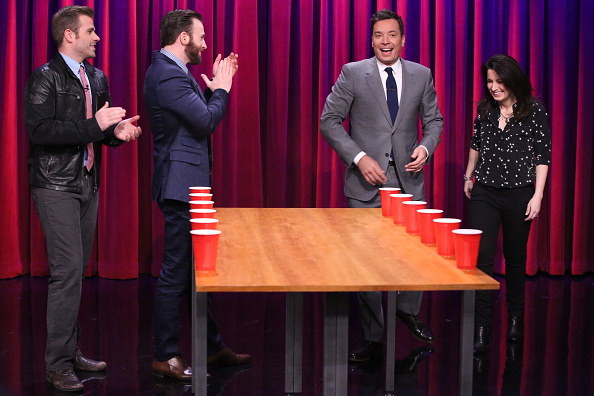 Watch Jimmy Fallon and Chris Evans Play Flip Cup With Their Siblings
Next Up: Editor's Pick